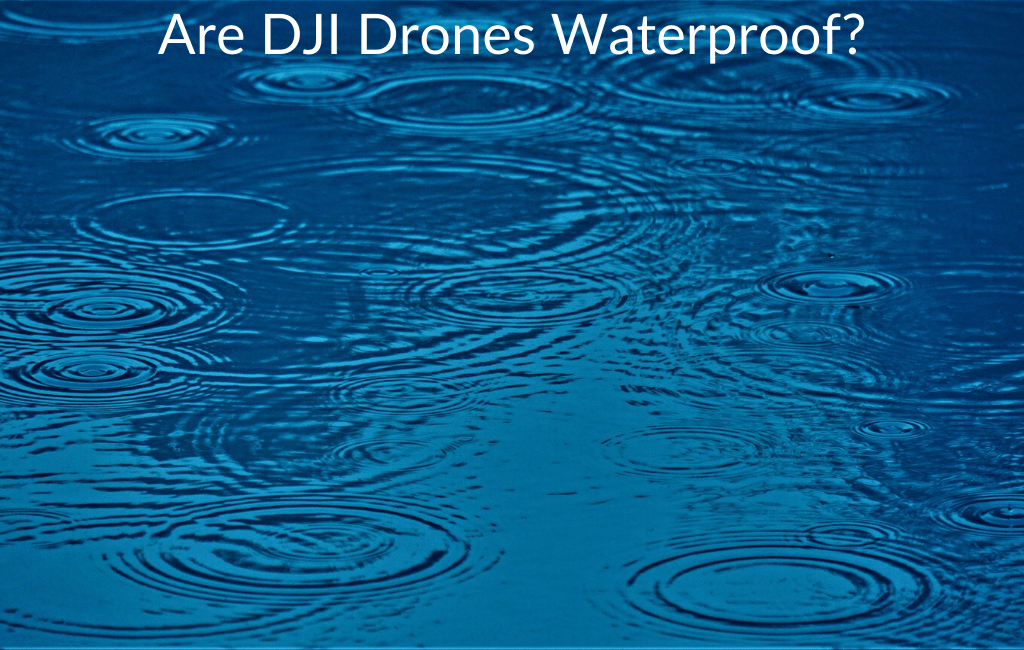 Drones have continued to grow in popularity over recent years and that shows no sign of slowing down either. Many people who used to not be able to afford drones when they were thousands of dollars each can now easily afford them since the prices have dropped significantly.

One of the main drone manufactures that everyone in the industry knows about is DJI. DJI makes some of the most powerful but also the most expensive drones. With each of these drones comes a variety of different features but one of the main things that people wonder about is whether DJI drones are waterproof.

Afterall, you would certainly hate to spend tons of money on a DJI drone only to ruin it by flying it in the rain or snow!

There are actually no DJI drones that are currently waterproof. The Mavic is more waterproof than the Phantom series but it is still not recommended to fly it in rain, snow, etc.

There are a few DJI drones that are water resistant and can be flown in the snow, rain etc. but again they are only resistant to water so if you submerge them in water they will get damaged and become inoperable.

The two main DJI drones that are water resistant are:

Both of these DJI drones are water resistant but you certainly pay a hefty price for that as both of these drones are substantially more expensive than the normal recreation drones such as the Mavic series or the Phantom series.

To see a video of what happens when you submerge your DJI Mavic in water check out the video below.

Are any drones waterproof?

If you are wanting to fly a drone in rain, snow, or other weather conditions to try and capture some amazing footage then you will 100% need a drone that isn’t just water resistant but one that is waterproof.

Related Post  Are Quadcopters And Drones The Same Thing?

Ideally you will want a drone that is waterproof and also won’t cost you a few months salary so that rules out the two DJI models mentioned above but what about other drones? Are there any other ones that are waterproof?

There are a few different waterproof drones that you find currently available on the market. One of the most popular as well as reasonably priced of those options is the Swellpro Splash Drone 3.

This model is made by Swellpro which isn’t nearly as popular of a brand as DJI and you will sacrifice some of the additional features that DJI has to get a drone that is totally waterproof. The Swellpro Splash Drone 3 can be found on Amazon by clicking here.

There are a few other drones that claim to be waterproof but most of the reviews for them show that they really aren’t and instead are merely water resistant. The main issue with that is if you are expecting a drone to be waterproof and it isn’t that can quickly turn into you destroying your drone!

Be sure to read all of the reviews that you can find on any waterproof drone and if you come across one with no reviews then I would recommend avoiding it entirely.

Can the DJI Mavic fly in the rain?

The DJI Mavic is a great drone and is super popular with a variety of people. It is so popular because it is a smaller drone but it also won’t break the bank unlike some of DJI’s other drones.

Despite the many obvious pros to the drones in the Mavic series none of them are waterproof or water resistant.

Since the air intake is smaller on the Mavic you might get away with flying it in a drizzle or even some light snow for short periods of time but when you do that you are risking damaging your drone and possibly damaging it permanently!

To learn more about the Mavic and specifically the Mavic Air 2 you can do so by clicking here.

What happens if a drone gets wet?

If you didn’t know that your drone was not waterproof or water resistant or even if you did but you accidentally got caught out in the weather what should you do? Once your drone gets wet what should your next steps be?

The first thing that you need to do when your drone gets wet is land it and then get it inside! You will then want to shut it off entirely and remove the battery. You should then use distilled water to rinse off the entire drone including the interior components (yes, get it more wet) before finally putting it into rice.

The reason for using distilled water and getting more water on or in the drone is to clean the minerals and dirt out of your drone that were in the water that it was submerged in.

If you got the power off and battery out quick enough then everything should still work fine once it is cleaned and dried out. Of course rice is the universal thing to use to dry out electronics but using the distilled water first to clean the dirty water out is vitally important!

Before putting the battery back in and attempting to power your drone back up you will want it to be fully dried out. Any remaining water in the drone will short out the electronics so it is always better to let it dry too long than not enough.

DJI Care Refresh is DJI’s protection plan for your new DJI drone. It is valid for one year from the purchase date and will allow you to replace up to two drones in that one year period. If at the end of one year you haven’t used both of the replacements you can then purchase the + plan that extends the coverage for an additional year.

The DJI Care Refresh plan does cover water damage to your drone either through flying it in rain or being submerged in water but the replacements are not free even with the plan.

If you are wanting to get some amazing footage of a storm or other weather event then it might be worthwhile for you to simply buy one of the DJI Mavic series drones and then purchase the Care Refresh protection and use the drone in as much water as you want during the first year. If you have the Mavic 2 it will cost you $120 for a replacement drone but if you are going to be selling the footage or making a movie with it then the $120 for a brand new drone is well worth the cost.