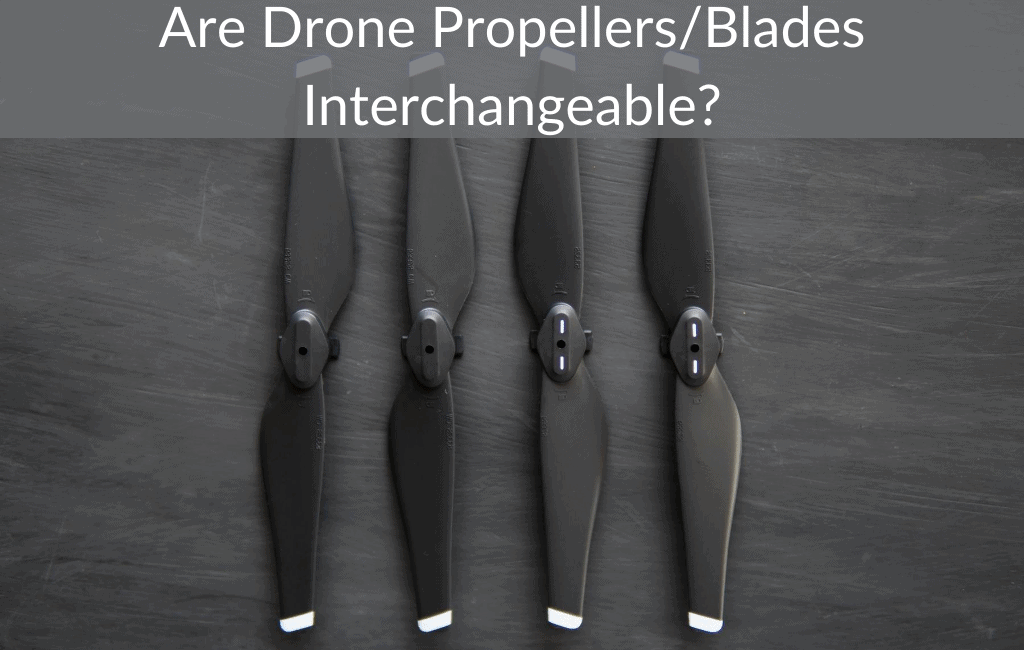 Without a doubt the propellers are a fundamental element of a drone, afterall without propellers your drone would never leave the ground. One bad thing about propellers is that they often need to be replaced and if you have multiple drones that can start to eat into your budget quite quickly.

Of course buying propellers in bulk would save money but that would require that all the propellers are the same, but are they? Are all drone propellers the same? Are they interchangeable?

There are a few reasons why drone propellers don’t work in different drones but the main reasons are because of sizes, money, and how propellers work.

Since all drones require different amounts of lift to take off or to fly properly then they will all have different sized propellers. Each propeller is designed to work in sync with the other ones on the drone to allow it to have enough lift to take off but not too much that it gets out of control.

It would also not work very well for a tiny drone to have the same exact propeller size as a giant drone (for obvious reasons)!

Money is another reason that all drone propellers aren’t the same. Simply put more and more companies are concerned about keeping profit margins high than they are about actually helping their customers. Drone propellers could easily be made in mass quantities and then put on all similar sized drones so that way they were interchangeable but drone makers didn’t do that!

Instead virtually every single drone will have a different diameter and pitch of their propellers so you can’t swap it out from a drone that is a different brand.

To learn more about propellers you can watch the video below.

Related Post  Can You Fly RC Planes in Parks?

How do you choose a propeller for your drone?

If you happen to have a drone where you damaged or broke one of the propellers you will likely want to know how to choose a replacement.

The easiest way to find a replacement drone propeller is to simply search for the make and model drone that you have. In most cases that combined with the word “propeller” or “replacement blade” will show you which item to buy.

If you are unable to find it this way then your next option is to measure the drone’s other propellers and start looking either online or in hobby shops. The diameter of the drone’s propeller is the same as the length of the propeller blade so don’t get confused with some companies that call it one thing when others use the different term.

Once you have the diameter (length) of the blade you will then need to find the right pitch and exact right sizing. This can be a bit of trial and error so going to a hobby shop to find the right propeller will normally work the best.

Can drone propellers hurt you?

When we are talking about the propellers on a drone a question that often comes up is are they dangerous and can they hurt you?

Drone propellers/blades can actually hurt you so they should be considered dangerous however on recreational drones the propellers typically aren’t strong enough to do more than break the skin on an adult.

A bigger threat is actually hitting someone with the drone itself as that could seriously hurt them if it lands on their head or neck after losing power. That is why drone operators are not supposed to fly their drones over people.

However this rule is extremely hard to enforce unless someone is flying a drone over a stadium or similar event with thousands of people and a police presence. In real day to day use drones fly hundreds of feet over people all the time without people even knowing which is first of all kind of scary and secondly it could turn dangerous.

Can a drone cut your finger off?

In the section above we mentioned briefly that drones can hurt you but many people wonder specifically if a drone can cut your finger all the way off. This of course would be much more severe than simply cutting it so knowing the correct answer is vitally important.

Recreational drone’s propellers are not going fast enough and are not hard enough to actually cut through a finger and cut it off. The drone’s blades can cut your fingers but it won’t remove them entirely.

There are certainly drones that could cut your fingers off such as those drones used by the government or even drones that have been produced in recent years for delivering packages but since most people will never be near this types of drones you are quite unlikely to cut your finger off with one.

When should you change your drone’s propellers?

Another common question that many drone owners have is when exactly should you change your propellers? Should you change them after a certain amount of use? Is there a period of time where they need to be changed?

Drone propellers/blades are actually quite sturdy and only need to be replaced when they get damaged or if you choose to replace them with better blades to increase the performance of your drone.

Drone propellers shouldn’t wear out as they are designed to simply spin in circles and never hit anything however real life often gets in the way. Propellers do get damaged when flying either through a rough landing or when the drone is accidentally flown too close to a tree.

If you inspect your propellers and they are bent or have been damaged in another way then you can certainly change them but if they are not damaged then you don’t have to replace them after a certain amount of time or use.

Related Post  How Much Weight Can An RC Plane Carry?

How long do drone propellers/blades last?

Of course as with anything this will vary from person to person and from drone to drone but the biggest factor that affects the lifespan of drone propellers is how well are they maintained and how often do you crash?

Drone propellers that are well taken care of and are not crashed into any debris or trees can last for many years! However because of damage done to them during flight drone propellers will only last until you damage them.

If you can manage to fly your drone without hitting the branches of a tree or landing sideways on them then a single set of drone propellers will last you as long as the drone will. Since that is pretty uncommon most people have multiple extra propellers that they carry with them when they are flying their drone so that when they damage them they can easily replace them.

If you are not a careful pilot and often run into things your propellers will likely last a few months before needing replaced but it could be even shorter depending on what you hit and how often you hit it.

The more careful you are the longer your drone’s propellers will last.

As a drone user propellers are one of the most important parts of your drone and should be well taken care of. Thankfully if you do happen to damage them they are relatively cheap and easy to replace.

We hope this article has been helpful in answering some of the questions that you might have about your drone and it’s propellers.

link to Are RC Crystals Interchangeable? (What Are They On?)

Flying an RC airplane is extremely fun to do and unlike an RC car, it is not something that is attempted by children. Being able to maneuver an airplane and take it off with your controls is...

Rc cars are so much fun, and if you have ever seen Fast and Furious Tokyo Drift you are probably interested in finding out if you can drive RC cars like they do. Drifting is hard to do, and takes a...