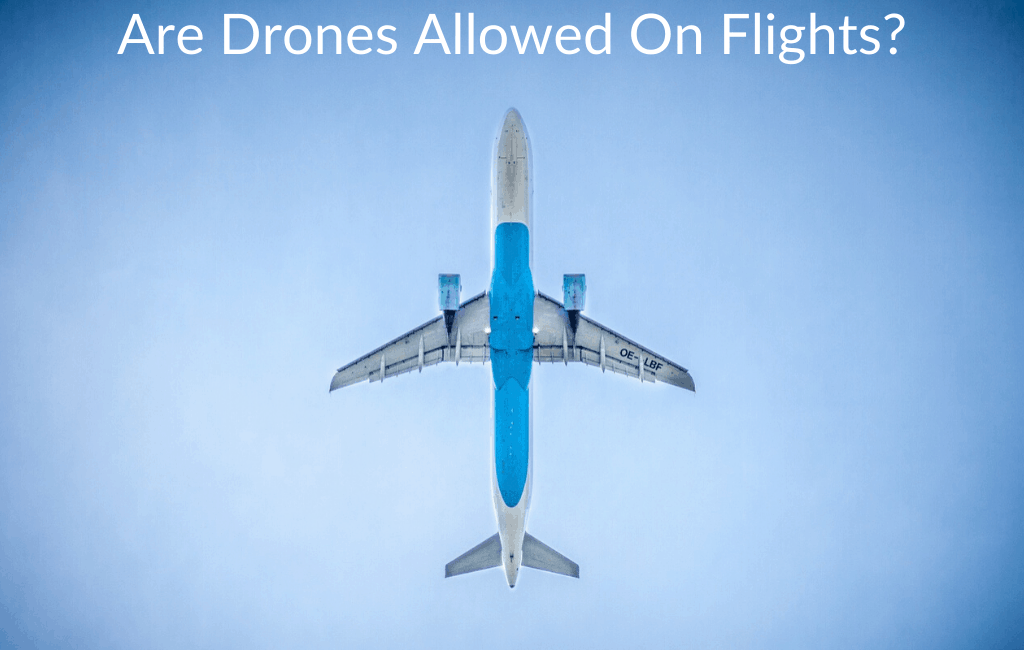 If you are planning on traveling somewhere soon and you are wanting to take your drone with you then you may have wondered whether drones are allowed on flights. Afterall, the propellers can spin pretty fast and the device has powerful batteries so will it be allowed?

According to the TSA drones are allowed to be taken through security but whether a drone must be put in the carry on luggage or in with your checked bags is up to the discretion of the airline that you are flying with.

Many people have reported having no problems with the airlines allowing drones in carry on luggage either so you are unlikely to have an issue if you are flying in the United States. Other countries have different rules and laws so if you are flying internationally be sure and check what those are before you ever take off.

When switched off and transported by passengers on a plane, drones are considered Personal Electronic Devices like smartphones, laptops, and cameras. The only possible issue that you might encounter is with the batteries for your drone but currently drone batteries are allowed in carry on luggage no matter how big they are and are only restricted in checked bags if they are over 100 watt hours.

You can find the exact rules for drone batteries on the TSA website.

It is true that drones are allowed on flights but as mentioned above drones are not allowed in every country. There are many countries that have placed serious restrictions on drones so if you are a citizen of that country or are simply traveling there you might find that your drone will be seized when you try to bring it into that country.

Related Post  Can An RC Helicopter Fly Upside Down?

In the USA or UK drones are allowed to fly with and carry on planes. So you can simply carry your drones with you onto the flight as you would  your smartphone or camera.

Can you travel internationally with a drone?

This question’s answer is yes but there could be a problem too. Many countries don’t allow drones at all in them!

Nicaragua banned drones entirely in their country which means you are not allowed to get into the country with a drone. In this case, if you can give a proper reason then authority may allow you to buy a drone there but flying in with one won’t work out well. . Morocco is also the same as Nicaragua in this regard.

Drones are also banned in North Korea, Cuba, Saudi Arabia, Egypt, Kenya, India, Iran, and Ethiopia. A funny thing in Saudi Arabia is you can buy drones but you can’t get past customs with them. These countries are highly restrictive about drones and without an official purpose; you can’t fly drones in them.

If you want to travel with your drone internationally then you should always carry your license with you (if you have one). While international standards differ and countries have their own laws related to drones, knowing that you are licensed to use a drone in your country can make a difference when dealing with the local authorities.

So if you carry a drone to a banned country, in that case, the aviation administration may give you some strict regulations that you have to follow. If you agree to follow their regulations then they may allow your drone.

It is a good idea before going to any country to check the aviation administration rules. If they don’t allow drones then don’t travel with your drone to that location.

Related Post  What Is PID Tuning On Your Quadcopter?

Safety recommendations to carry a drone on your flight

Can you check the batteries or should you have them in your carry on luggage.

The rules for this vary a bit depending on the size of your batteries and where you are flying from and to. If you are just flying inside of the USA then the TSA rules for batteries (mentioned above) applies.

An example of a drone battery is the DJI Mavic Air which has a battery that is 27 Watt Hours so it could be in your checked luggage or carry on whichever you prefer.

Most of the time it is best to simply keep your batteries with the drone and have them in your carry on luggage so you can keep a closer eye on them.

Stay Below Your Airline’s Watt-Hour Limit

According to FAA regulations and European Cockpit Association safety recommendation rules to carry a drone or batteries, you can carry a maximum of 2 batteries if they’re between 101 and 160 Wh. On the other hand, if your batteries are below 100 Wh, you can carry on as many as you like.

Mavic drone batteries are below 100 Wh with most of them being 43.6 Wh The Inspire 2 battery is at 97.58Wh so again it is below the 100Wh threshold. However, if you have to carry high capacity batteries like the Inspire 1 batteries at 129.96Wh then in that case, you are only able to carry two of them.

These rules and regulations don’t apply all over the world ao before going to any other country be sure to check aviation administration regulations in that country.

Use an Appropriate Bag to safely carry your drones in flight

In order to carry your drone safely, you should definitely use hard shell bags that protect your drone and its batteries from external hit or possible damage.

If you are traveling with high powered batteries then hard shell bags are very important and necessary. As we know batteries on a flight can generate heat so these types of bags can mitigate damage from combustion, reducing the possibility of igniting surrounding objects.

Drones are certainly allowed on flights in the United States but if you are flying internationally the rules can be a little more confusing. The easiest way to know exactly what you can and can’t do when bringing your drone on a flight is to simply contact the airline that you are flying with and ask them if they have any special rules.

If flying outside of the USA you can also ask them about that and whether your drone and its batteries are allowed in carry on or checked luggage.

Ultimately it is your responsibility to make sure that you follow the rules and regulations so be sure to know what they are so you can follow them properly.