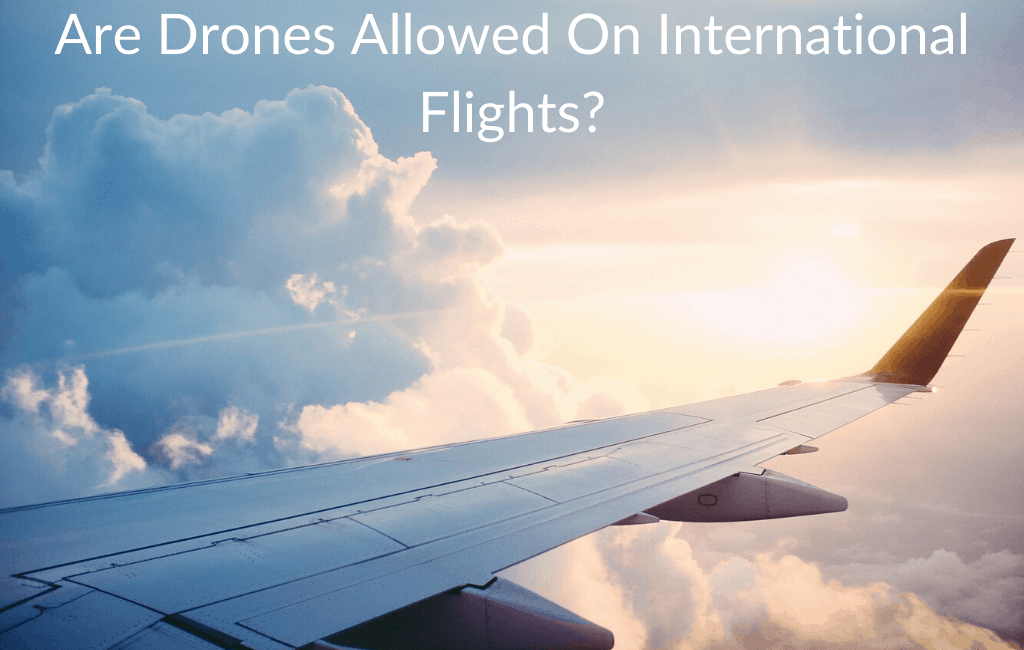 Are you planning a vacation and don’t want to leave your flying buddy behind? You’re not alone. No doubt, drones can be such a cool thing to travel with, especially when you’re an enthusiast who wouldn’t want to be missing your drone when you get to your final destination.

Plus, you might also have plans to work with your drone or take some amazing pictures or videos so leaving it behind isn’t ideal. The challenge seems to come in when you have to go on a flight with your drone and it gets even more complicated when you are talking about international flights!

There’s a lot of people wondering if drones are allowed on a flight at all, let alone, an international flight.

Drones are allowed on planes and, of course, on international flights but some countries don’t allow drones to be brought in or even be used there. Before you fly to another country you need to make sure to learn the laws in that country in regards to drones to see if you can bring your drone to that country.

One of the easiest ways to find out whether a drone is allowed in a specific country is to look it up online. There are many websites that are solely dedicated to the rules and laws about drones around the world.

You can also contact the airline that you are flying with and ask them. Airlines are normally quite helpful and also understand the more intricate laws that are in place in some countries.

There are rules to flying with a drone when traveling internationally and if you want to successfully get to your destination with your drone, you need to keep these rules in mind.

Rules for Carrying a Drone on an International Flight

Here are some of the rules to keep in mind when taking your drone on an international flight:

Related Post  What Is The Best Drone For Rock Climbing? (The One You Need)

This is really the first thing to keep in mind when you are considering travelling with a drone. Laws vary from country to country, so what applies in your country may not necessarily be the case in another country. Check the official website of the country’s aviation authority and make sure to respect all the rules concerning drones in the country you’re going to.

Many European countries have rules against flying drones within 50m of people, property, or vehicles. This can make it quite difficult to find a place to fly your drone, but it is still very important to check the drone laws of that country and follow them as closely as possible.

Also, a lot of countries have particular laws that restrict you from flying near monuments, important buildings, and other vital infrastructure. This means that you would have to get knowledge concerning the monuments in the country or city you are travelling to in order to be able to follow the rules and not end up with your drone confiscated or worse.

If you are not quite sure about the laws, take the time to as the local authorities before going out to fly your drone. Plus, as already mentioned, you can always check the official website.

Another important thing is to make sure that you carry your license when travelling with your drone. It’s important even for local flights but more so, for international flights. Of course, international standards generally differ, and drone laws differ from country to country, but having a drone license from your own country can make a significant difference when facing the authorities of another country.

Even if you aren’t required to have a drone license (as is currently true in the USA) it is a good idea to spend the money and get a drone license before traveling abroad to help make your drone use seem more official.

Have the batteries in your carry-on bag

When you’re traveling via an airplane, you can choose to check in your drone, or you can choose to carry it with you on the plane. If the drone you’re flying with is a larger one such as the Inspire 2, you may be required to check it in because it has a quite large case and may exceed the size requirements of the airline for carryon luggage. If you’re flying with a smaller drone, carrying it with you on the plane shouldn’t be a challenge.

Also, when you have your bag in the overhead compartment, any emergency can be quickly responded to by airline staff.

Stay below the watt-hour limit of the airline

The watt-hours of the batteries you’re taking on the airplane are a very important factor to consider. The FAA’s website says that if your batteries are less than 100 Wh, you can fly with as many of them as you like. On the other hand, if the batteries are between 101 and 160 Wh, you are not allowed to carry more than two.

However, keep in mind that the rules of the FAA do not apply to every country or airline. So, you would need to check aviation administration rules in the country you’re traveling to and check the rules of the airline as well.

In most cases contacting the airline you are flying with and asking about the rules for drones and their batteries is the easiest way to find out.

Use the right bag or case for your drone

Related Post  Why Should You Have a Brushless Motor In A Quadcopter?

These battery bags can hinder the possibility of an explosion as well as lower the risk of igniting other objects around them.

You can find a battery bag by clicking here.

You may have to declare your drone on your trip

Some countries require you to declare your drone at customs or possibly register the drone with the country before you fly. Joining a drone community will help you know what specific drone regulations your destination country has.

Here, you can learn from the experiences of other people to ensure that you don’t make a mistake that will cost you your drone or a hefty fine.

You can always use the internet to do your research and make findings but rules and laws change quite regularly so if you can have a direct conversation with the airport authorities, that is an excellent idea.

Sometimes, the drone regulations of certain countries are so strict that you may consider traveling without your drone. However, some people may have pressing reasons why they need to travel with their drones so if this is you, do everything you can to get the necessary approvals to take your drone with you on your trip.

Basically, learning about the drone regulations of your destination country is a good place to start.

Drones can certainly be taken on flights both domestically and internationally but when flying internationally you have to worry about what the rules and laws will be for drones when you land.

Some countries won’t even allow drones to come into their countries through customs so it would be a good idea to actually know that before you ever take off.

Other countries just put serious restrictions on where and when you can fly a drone and not following the law can result in fines or imprisonment.

No matter what the laws are where you are going it is ALWAYS best to know them in advance.