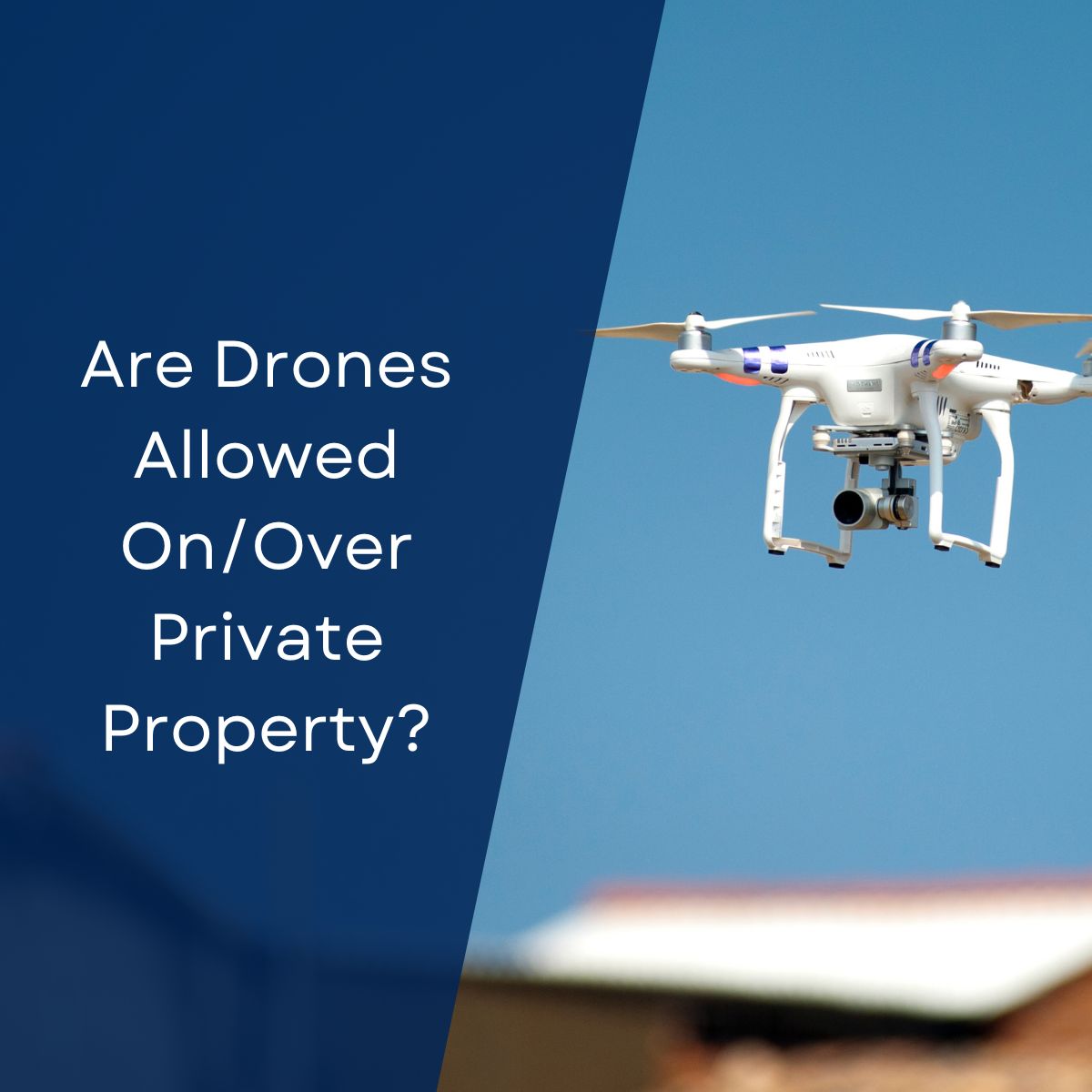 At one time or another you have seen a drone hovering in the sky. They are unmanned aircraft controlled by a pilot on the ground using a remote.

These drones are used for recreational use and photography as well as commercial use such as delivering packages and and helping in natural disasters.

One conecern that many people have is a drone flying on or over their property and invading their privacy. But is that allowed?

You cannot fly a drone low over someone’s property without permission as it is considered trespassing. Generally flying a drone above house height is considered airspace that the property owner does not own.

Drones should not be flown over private property as it may cause people to be scared they are being spied on. If you are asked not to fly the drone over someone else’s property and still continue to do it anyway they have every right to report it and you can be fined with trespassing or being a private nuisance.

If you find a suspicious drone flying over your property, call law enforcement.

There are some places where flying a drone is not permitted and it is always a good idea to stay within the Federal Aviation Administration( FAA) guideline given. By following the rules, you will avoid unwanted arguments and fines and enjoy an exciting drone flight.

What do you do if a drone is flying over your property?

It may come as a surprise to know that you do not own the airspace over your property. The air space your property takes up is yours but the FAA is in control over the rest.

According to the Federal Aviation Administration they own the airspace over your home and drones can fly in the air just like people walk on sidewalks.

Anyoine is permitted to walk on the sidewalks just as anyone is technically able to fly a drone over your property. Now, this may sound controversial according to what we already discussed about private property.

The difference is really where the drone is at in regards to height. If it is hovering near your windows or doors or just a few feet off the ground it is likely in your airspace.

Related Post  Can A Drone Open A Garage Door?

However if it is flying a long way above your house or land then it is likely not breaking any laws.

The point is, that as long as the drone is not doing anything illegal then it is okay that it is hovering in the sky. It becomes a problem when the drone is flying really low over someone’s yard or next to their house.

For this, someone could be turned in to the authorities as being suspicious and trespassing.

If a drone is flying so high over your property it can barely be seen, then there is no cause for alarm. But if it constantly flies really low then the user needs to be contacted and asked to stop.

If failure to comply with the FAA guidelines continually occurs, then the property owner has the right to contact law enforcement and report the drone user. By following the rules set in place for drones, you can avoid all of this.

The drone guidelines are there for a reason.

How to keep drones off your property?

Let me reassure you that a drone is loud and you will most likely see it if it is spying on you. But what if your neighbor just won’t stop flying his drone directly over your house?

Or what if happens so often it makes you fear that your privacy is being violated?

If the drone is coming close to your house, windows, or doors then you need to contact law enforcement and report the issue. Your first thought might be to try and trap or destroy the drone but if you do that you will be breaking the law yourself.

From getting a drone yourself to drone jamming systems, there are many ways you can keep drones away from your property but virtually all of those involve you breaking the law.

Despite the drone being over your property that doesn’t give you the right to throw (or shoot) something at it to try and disable it. If you damage it you could be ticketed or even sued for destroying someone’s property.

That is why if you feel like your privacy is being violated your first call should be to the police.

Drone surveillance laws prohibit the use of drones on property that are a private nuisance, trespassing, or an invasion of privacy. However even if the other person is breaking the law that doesn’t mean you can turn around and do it too.

If you are uncomfortable with the presence of a drone, reach out to the user to let them know. If this does not solve the problem, you can post signs on your property concerning the drones and of course contact the police.

Where can you not fly a drone?

Drones are fun to fly and you can capture the most amazing images. If you are going to be piloting one of these robotic devices, it is important that know where you are not permitted to fly them.

There are several different locations where drones are not allowed to be flown.

You should not fly your drone at populated places such as parks, beaches, and sporting events. You cannot fly the machine over 400 feet in the air since this may result in collision with an airplane or interfering with radio transmissions. A drone should also never be flown in any area where it may interfere with emergency response.

Remember that a drone must always stay within your line of sight as well. Also it is good to check up on and know what laws your state/city has concerning drones to know where and when to fly them.

Some states or cities will have even more strict rules than the FAA regarding drone use so be sure and check the law before you take off.

If you operate a drone properly you will enjoy the experience it has to offer but if you don’t follow the law you could end up with a ticket, your drone confiscated, or both.

In what states can you legally fly a drone?

Did you know that some countries have banned drones? Places like Argentina, Cuba, and Saudi Arabia do not allow drones to be flown in their country.

By doing this, they wanted to get rid of possible drone issues altogether. Luckily, in the United States we are allowed to fly a drone. It’s just one of the many freedoms we can enjoy here in America.

Twenty-seven states do not have any laws concerning drones at all. There are eight states that do have laws specifically for drone use but none of them prohibit flying drones in the state.

Can drones see at night?

You are gazing up at the star filled sky taking in the wonder of the constellations. A blinking light distracts you from your trance as you look to see where it is coming from. It is too small and too close to be an airplane.

Drones can see at night but in order to see clearly or to take a clear picture or video there must be enough light and the drone must be at a close range.

The only way a drone would be able to see you clearly at night is if you are standing still in a well lit area. If you are outdoors in an area with a lot of light then it has a good chance of seeing you if you are within 50 yards.

The further away a drone gets, the more blurry the images will be especially at night.

If a drone is close enough to be filming you, then you have a good chance of seeing it and even hearing it. Its lights and loud humming sound will be a dead giveaway of its whereabouts.

But as was stated earlier in this article, contact authorities if you feel your privacy is being invaded by a drone. Most recreational drones flown at night are just wanting to capture a photograph of the city’s lights so they shouldn’t be close to your house at all.

Drones are used for many purposes and one of them is just for fun.

You are able to fly your drone over non-populated areas and as long as you are within the FAA rules and guidelines concerning drones then enjoy your flying as you experience new perspectives and reach for new heights with your drone.