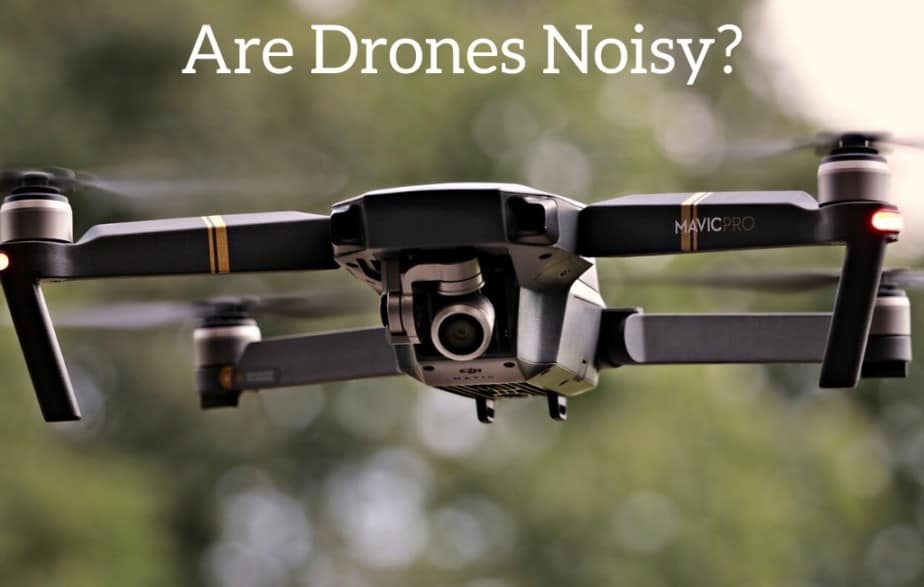 If you are considering buying a drone for yourself, a friend, or loved one then you probably want to know how noisy they are before you purchase it. Drones have a very distinctive sound that most people will be able to notice immediately but how loud are they really?

How loud drones are varies from model to model and by how close you are to the drone. As drones go higher or further away from you they will become more quiet and harder to notice. A more quiet drone will normally be between 50-60 dBA when flown at a height of 20-25 feet while a louder drone will be from 65-70 dBA.

The larger the drone is the louder they will normally be while some of the more expensive models are designed to run quieter. Even at the high end of the decibel range with a louder drone they will only be approximately the loudness of a normal conversion (based on the numbers from Yale).

Of course every drone will be different so yours might be louder or quieter than the dBA mentioned above. If you want to know exactly how loud your drone is you can buy a decibel meter on Amazon to get an exact loudness for your make and model.

You can check out the video below for some specific models decibel loudness and to see how the loudness is measured.

What exactly is it that affects the loudness of a drone and what can you do to make your drone quieter? We will discuss those things and more in the rest of the article.

How high you are flying your drone plays a large part in how loud the drone sounds to the person on the ground. Of course the drone doesn’t get any quieter as it goes higher but since it is further away from people then the sound that we hear gets quieter.

Related Post  How Much Weight Can An RC Plane Carry?

Once a drone is 200-300 foot off the ground the sound will be barely noticeable to anyone on the ground. Since a drone can only go 400 feet above the ground according to FAA guidelines then you will have to be flying your drone at the top of its max altitude before you won’t hear it at all.

The make and model of your drone will affect how loud it is quite a bit. Many people assume that all drones are about the same loudness but that would be an incorrect assumption. The more expensive DJI drones are considerably more quiet than a drone made by a cheaper manufacturer.

All of DJI’s drones are relatively quiet when compared to similar sized drones from other manufacturers but some models are noticeably quieter than others.  If you would like to know how loud each DJI model is then you can check out the comparison video below.

But what if you haven’t dropped a ton of money on an expensive drone? Will a cheaper drone blow your eardrums out?

Of course the answer is no. Cheaper drones will normally be a little louder than their more expensive counterparts but only 10-20% louder which isn’t a giant swing in volume.

The difference between the loudness is not something that should be a deciding factor when it comes to choosing a cheap or more expensive drone as the loudness will be very close with most makes and models no matter how much they cost.

Of course this is similar to altitude in that the further away you are from your drone, the quieter it will sound. Once you are a few hundred feet away from your drone you will hardly be able to hear it at all.

Of course the volume of the drone won’t change at all it will just be harder for you to hear because of the distance it is away from you.

Related Post  RC Plane Going Backward? Here’s What To Do.

If you are flying your drone in a park or other area with many people around flying a drone very close to them could at the very least be annoying and in some areas of the country or world could even get you a fine or your drone confiscated.

Knowing the laws where you a flying your drone at is important to ensure that you don’t get into trouble with having your drone too close to other people or their property.

If you want to know how noisy a specific drone is then you should test it out! A decibel meter is relatively cheap (as mentioned earlier) and is the best way to know exactly how loud a drone is.

If you are interested in buying a specific style of drone then buying a few different models from different manufacturers and then testing out their loudness is a great way to decide which one you prefer. As mentioned earlier DJI drones are normally the quietest but they are also almost always the most expensive models as well.

If you have a specific price range that you are looking for then buying 3-4 drones in that range and testing them out is a great way to make sure that the one that you buy is as quiet as possible compared to its competitors.

If you are more open to different price points and want to find the quietest possible drone then these are a few models that you should look at. They are considered some of the quietest drones on the market and often have sound levels below 40 decibels at a normal height or distance.

This drone comes with a built in camera and allows for up to 25 minutes of flight time while filming. It comes with a folding remote that can be connected to your phone.

When you are within a few feet of the drone it is approximately 65dBa but is virtually impossible to hear once you are 50-75 feet away from it.

You can read some of the reviews of this drone on Amazon here.

If you want to watch this drone in action and see how loud/quiet it is then you can check out this video below.

This model is considerably cheaper than many other models that are on the market and is a very budget friendly option. It offers up to 15 minutes of flight time per charge and is extremely quiet in flight even when you are close to it.

You can learn more about it and check out some of the reviews on Amazon by clicking here.

The video below has a full review of this drone model but you can see exactly how quiet it is (even when flown indoors) at the 4:30 mark.

This model is a great middle of the road drone when it comes to pricing and specs. It won’t set you back a fortune but it certainly isn’t the cheapest drone on the market.

This drone can be up to 2,000 feet away from you without any problems and comes with a built in camera and GPS positioning. Of course it has tons of other cool features as well.

The best feature (in my opinion) that this drone has going for it is how insanely quiet that it is!

Even at close proximity this drone is amazingly quiet! That combined with the other features makes it a great choice for a quiet drone.

You can find this model on Amazon here.

The full review video can be found below. At the 5:05 mark you can hear exactly how quiet that this drone is!

Traditionally drones are quiet noisy but in recent years there have been many newer models that have been released that put an emphasis on being quieter. The best way to find a drone that is quiet enough for your liking is to buy a few different models, buy a decibel meter and test them out!

All drones will vary in loudness but the three mentioned above are ones that are reasonably priced and are some of the quietest ones that are currently available.