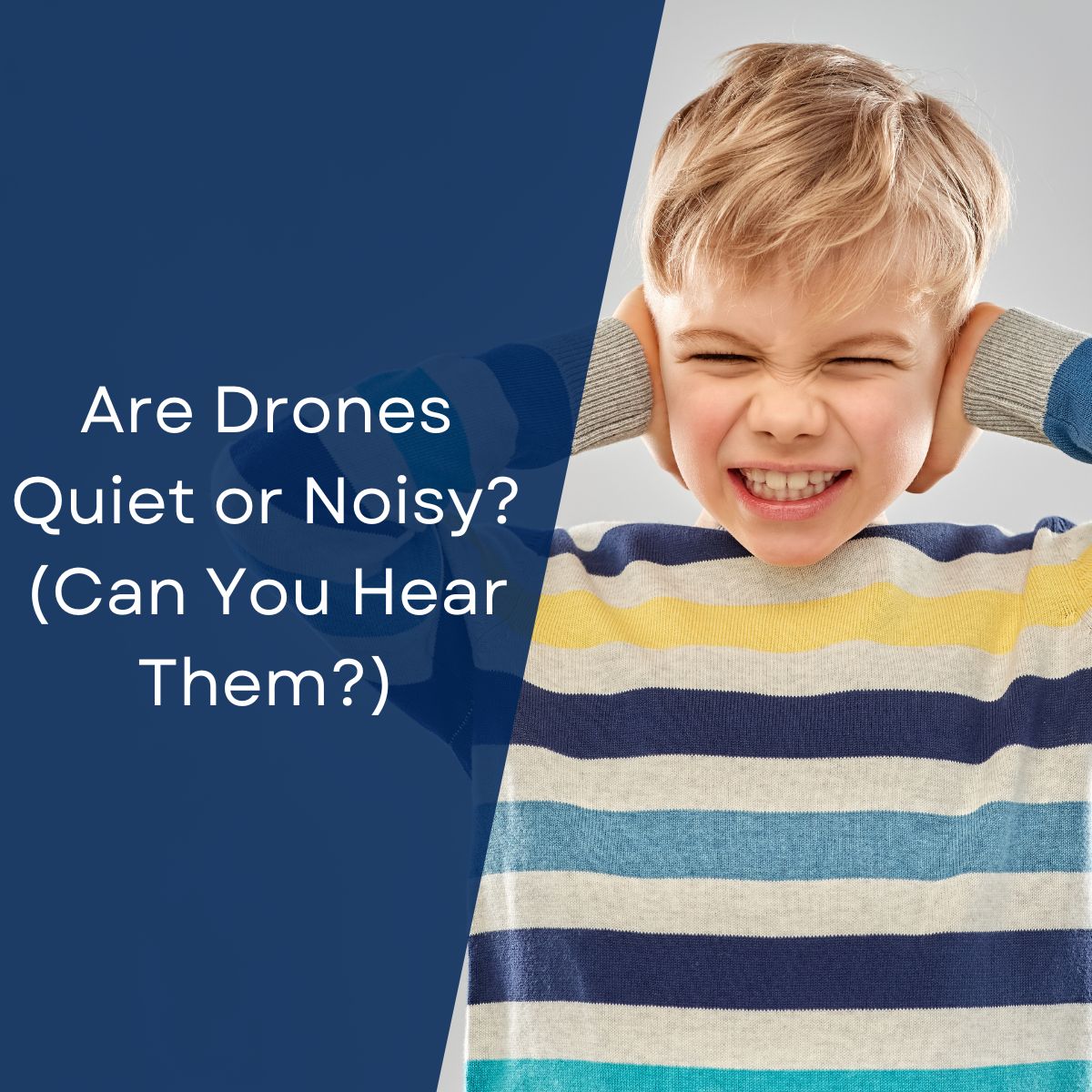 Have you ever looked up in the sky and seen a robotic flying device with blinking lights and propellers? This is a drone and it can be used to capture some amazing pictures of scenery from a sky-high perspective.

These drones have a lot of working parts to make it soar up into the clouds. Its propellers vibrate and move rapidly to make this happen.

Because the propellers are moving so quickly, they emit a sound. If a drone is in your area you will most likely be able to hear it.

They are not necessarily quiet devices although most aren’t really incredibly loud either.

Large drones when they are close to you will be about 70-80 decibels which is the approximate noise of standing next to a busy road. Once you are about 100ft that noise level will reduce significantly however you will still be able to hear the drone. Smaller drones will normally be half (or less) as loud as their larger counterparts.

Hobby or recreational drones are known to be noisy enough that you will hear their distinctive sound pretty easily. Drones are never completely silent because of the vibrations their spinning propellers make, they produce a buzzing sound when in use.

The military may have a silent drone for stealth missions or one that is close to being completely silent but as far as normal consumer drones go, they are pretty loud devices.

The average sound of a drone is about 75 to 80 decibels when it is 3 to 5 feet away from you. The sound is similar to a loud vacuum cleaner.

A quieter drone will produce a sound that is about 60 decibels.

However, the higher the drone is or the further it is away from you the easier the sound will be to miss. A drone that is flying a few hundred feet in the air will be hard to hear over traffic noise or other noise around you.

Saying this, most drones are rather noisy when near the ground unless you purchase one that is quieter. There are also some ways you can try to reduce the sound the propeller of your drone is making which I will go into later in this article.

Related Post  What To Do When A Drone Lands On Your Property?

A drone is not likely to sneak up on you since you will be able to hear its humming sound. You can hear the drone flying in the air and it is not a quiet aircraft.

To see the most popular drones just click here.

Are Some Drones Quiet?

There you are enjoying your drone flight when someone mentions how loud it is. Or maybe your neighbors constantly complain that the buzzing sound gets a bit old after a while.

If you are looking for a quieter drone, there are some that are more quiet than your average drone, but remember that because of how they are made, you cannot purchase a drone that doesn’t make a sound at all.

Some drones can be quieter than the average consumer drone but all drones will make noise to some extent.

Now, some drones are quiet like the DJI Pro Platinum that is said to be 60 percent quieter than the other Mavic models. The loudest this drone ever gets is 60 decibels.

Another is the Parrot Mambo and is considered the cheapest quiet drone. The sound it makes doesn’t get above conversation level sound.

Then there’s the Yuneec Q500 which keeps its vibrations in check thanks to the insulator material on its body. The DJI Phantom 3 Pro has a feature that prevents the drone from shaking making it quieter as well. This feature also helps the aircraft to get clearer photos.

The Funksy 913 drone is small and the sound it produces is similar to a high-pitched conversation.

The DJI Mavic 2 is another quiet drone that resembles the sound of driving in a car at about 60 mph.

The MJX B3 Bugs 3 sounds like you are running a small vacuum cleaner and is cheaper than the DJI drones.

Then there is the Holy Stone HS720E which offers a lot of features with less noise. The Holy Stone HS160 Pro is lightweight and a good starter drone for beginners.

Lastly, the Parrot PF728000 Anafi drone blocks out unnecessary noises normally produced by drones. Keep in mind that more expensive drones will be better quality but if you want a quieter drone so you don’t annoy your neighbors, these are some great options.

Can You Hear A Drone Flying?

Some people may get annoyed by the high-pitched noise a drone makes. Then there are those who may be a little worried that a drone could be flying right above them and they won’t hear it.

This however is not the case, You will hear a buzzing sound as well as see the device in the air.

You can hear a drone when it is flying especially in a quiet residential area because of all the distinct sounds the device makes.

Since we’ve talked alot about quiet drones, let’s take a quick look at the noisiest drones. The DJI Inspire 1 & 2, DJI Phantom 4, and the Mavic Air are considered to be the loudest drones.

If the sound doesn’t bother you then these are still great drones. But if you’re sensitive to the loud buzzing sounds, this will be the drones to stay away from.

In the end, all consumer drones will make a sound you can hear and none are totally quiet especially when close to you or your property.

Knowing this, there isn’t a drone that can sneak up on you and video you without you knowing it is there. First of all, you will hear it’s buzzing sound and second, It will have to be really close to get a clear image.

The reason it is noisy is because of all the features it has and how fast the people move to bring it up into the air. When a drone is flying, its propellers are moving really fast and this makes a sound as it hovers.

So if a drone is flying above you you will know it.

How Do I Make My Drone Quieter?

You are shooting a video with your drone making sure all the images are perfect. When you play back the recording you notice a humming sound in the background that takes away from your beautiful images.

You need a way to make it quieter.

There are some ways you can make your drone quieter by following some simple steps.

First you can replace the propellers with a “raked wingtip”. This is a more acoustic friendly designed propeller blade to make the drone quieter.

Next, drones with electric motors are quieter so to reduce the sound coming from the main rotors you can install a simple motor glider to help with the unwanted sound.

Another way you can make your drone quieter is by using noise reduction shrouds of nano-fiber materials to capture the sounds it is making and directing them upwards. This doubles as a protective covering from objects for the blades as well.

The last tip for a quieter drone is you can sand down the surface of the propellers or even just make your own. A smooth propeller will produce less sound and when you sand them down or create your own blades you can make them however you want.

Flying a drone can be an exciting adventure. However, drones are usually noisy and not many of them are quiet.

Some quiet drones can be purchased but they are never complete without sound. If you want to make your drone quieter, try replacing the propellers or putting on noise reduction shrouds.

If you want a quiet drone, consider purchasing one of the quieter models. A drone is noisy and you can hear it as the aircraft hovers in the sky.