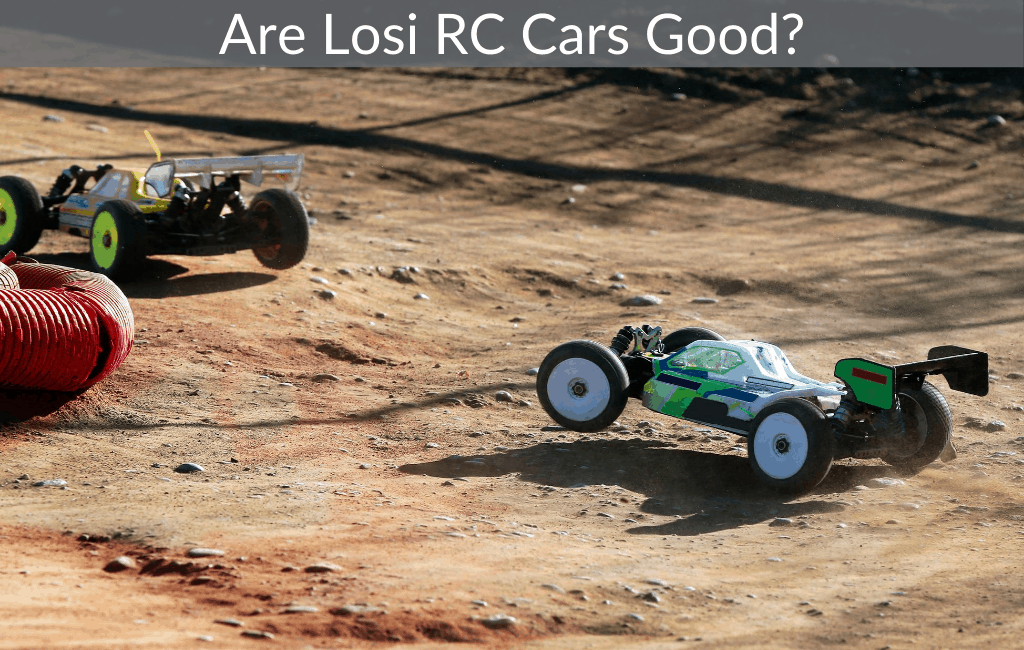 If you are looking for your first RC car or are simply looking to get a new one then you have likely noticed many RC cars available from Losi. Of course that then brings up the question of whether Losi RC cars are good or not.

In general Losi RC cars are quite good and should last you a long time but unfortunately there will always be some models that aren’t as good as the competitors. If you are looking at a specific model be sure and read the reviews and compare it to a similar model made by a competitor.

Often RC manufactures will all have very similar models that will all function very close to the same. What you should do in that case is compare the Losi model with the models from Traxxas, Redcat, etc. Once you have done that then you can much more easily make a decision on if Losi is your best option or not.

Losi makes great RC cars for sure but just because they have good models doesn’t mean that all of their models are the best!

To see a comparison between a specific Losi and Traxxas model and what you should look at when comparing models you can check out the video below.

Losi is absolutely a good RC brand to buy a car from and it is one of the main brands in the RC car world. As long as you do your research on the specific model you are considering Losi will be a good choice for you.

Related Post  What Is The Cheapest Traxxas RC Car? Should You Buy It?

That isn’t to say that everyone should immediately get rid of their RC cars and buy a Losi as there are many reasons why you SHOULDN’T.

Since Losi is a good brand you will also pay a lot more for an RC from them than you would buying from a lesser known brand. Although the quality of that other brand will certainly be worse than Losi’s if it’s your first RC car you probably won’t want to spend tons of money on a new hobby.

Another reason why people shouldn’t choose Losi is if there is a better model available from different manufacturers. No company can make the best of every single item so there are certainly going to be some models that you are better off buying from someone else rather than Losi even though Losi is a great brand.

Despite all of these reasons why it might not be best for someone to buy from Losi that doesn’t change the fact that Losi is a good brand but just because they are a good brand doesn’t mean that they are right for everyone.

Virtually everyone would agree that Apple is a good brand and makes good quality phones and computers (albeit at extremely high prices) but that doesn’t mean that everyone should own an Apple product (sorry to all you Apple lovers out there).

Is Losi better than Traxxas?

Ahhh now there is a question that has been dividing the RC community for decades. Is Losi better than Traxxas? Is Traxxas better than Losi?

These questions are constantly asked and will likely continue to be asked for a long time to come.

Ultimately you have to do the comparison of the two specific models that you are looking at rather than trying to compare brands. For example, the age old question of whether Ford is better than Chevy is impossible to answer but if you look at the Chevy Silverado vs the Ford F-150 it becomes a little easier to compare.

You should do the same with Losi and Traxxas and compare the two similar models so that way you can hopefully decide between those models rather than trying to decide between two great companies.

When you plan on buying a Losi or are at least looking at one you will likely want to know who actually makes Losi RC cars. Although this might change in the future we will give the answer as of now.

Losi RC is currently owned and operated by Horizon Hobby. This company has purchased many different companies in the RC space including buying Losi in 2000.

Prior to 2000 when it was sold Losi RC cars were made by the independent Losi company but of course that changed when they were sold to Horizon. Horizon has continued to amass many different RC brands so it’s certainly possible that in the future they will rebrand those other models under the Losi name or even rebrand Losi to be under the Horizon name but as of now that hasn’t happened.

Is Losi metric or standard?

This is another common question that we get quite often when people are looking to buy a Losi RC car or when they need to fix a used one.

Losi RC cars are actually designed to be standard on virtually all of their parts but there are a couple of parts on some models that are metric as well.

If you are planning on working on your Losi you should be able to do the majority of work using standard but if you happen to have some models you will need metric to work on certain parts as well.

Honestly not having a standard across the entire industry is frustrating not just in RC cars but also in normal cars too! I recently replaced the alternator on a Ford Crown Victoria for a friend and on that one part it used both metric and standard! For one part!

To be on the safe side it is always best to simply have both metric and standard tools in your toolbox to make sure you are never without the right sized tool for the job.

I hope this article has been helpful in answering your questions about Losi as a company and whether they are a good brand or not.

In most situations if you pick a Losi RC car you will find that it will work just fine for you and last you a long time since they are quality RC vehicles. In some cases you could do better to choose a different model over Losi but you certainly won’t be stuck with a horrible model if you choose a Losi.