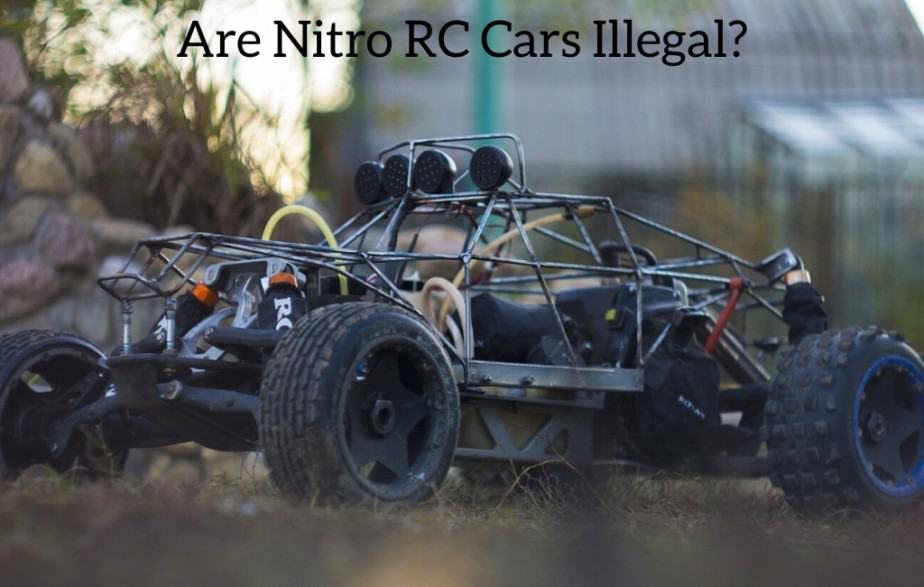 There is a lot you can do with your nitro RC car such as bashing, driving, jumping and racing. Some newer people to the RC car hobby might wonder whether Nitro RC cars are even legal to be used in places like parks, city roads, or similar places.

Nitro RC cars can function just like a regular car and many parks have notices posted that no motorized vehicles are allowed. Does that apply to Nitro RC cars? Will you get in trouble for using your RC car in places like that?

That is what this article is all about.

Are Nitro RC cars illegal? Nitro RC cars are fine for you to own and use and is a popular hobby in the United States and in many other countries too. If a park or other place has signs posted that says no motorized vehicles in most cases that does not apply to a Nitro RC car as they are considered toys and not vehicles.

Since the definition of vehicle is: A thing used for transporting people or goods (according to the Oxford dictionary) then a nitro powered RC car would not fall under that definition. However, even though a sign like that wouldn’t prohibit you from using a nitro RC car in the park there may be other laws on the books that do prohibit its usage.

If you are in a new city or town it is important to know what the laws are as you are much more likely to rub some people the wrong way with the usage of a louder nitro car then you would with a quiet electric one. Many people feel that nitro RC cars are way too fast to be used in public areas and should only be used on private land or at a specific track but what those people don’t know is that electric RC cars have a much higher speed possibility than their nitro counterparts!

Electric RC cars have gone over 200MPH while the fastest a nitro car has achieved is just over 120MPH.

Of course facts don’t matter to some people so you are still likely to rub some people the wrong way while using a nitro vehicle. If you know exactly what the laws are in the area where you are using the RC car you are much less likely to get in trouble and you will be better equipped to deal with issues if the police happened to get called.

To see some of the best Nitro RC cars you can check out the reviews and prices by clicking here.

Yes, there are some people who are stupid enough to call the police over an RC car. Check out the video below

Can you use your nitro RC car in a park?

You will find most local parks have signs that say no motorized vehicles! In most cases, a nitro RC car is considered a toy and not a vehicle so you should be good to go. However, some areas were designated for driving RC cars, especially electric trucks, which might not include the nitro models.

One thing is for sure, You don’t want to take your RC car onto privately owned property unless you have permission from the owner. You also don’t want to use your vehicle in restricted government areas. (although this is less of a problem with cars than it is with RC planes, drones, or helicopters.

You might find certain locations that have signs that strictly prohibit the use of RC cars or even nitro RC cars specifically. Of course if there is signage saying that then it would be illegal for you to use your car in that area.

Most of the time if there are no signs then you will be alright using your nitro car there as long as you aren’t being intentionally obnoxious (such as driving circles around a group of people).

If you come across a mouthwatering track or place that looks suitable for RC bashing with no sign that says no to RC cars, then go for it. Some bike trails and even skateparks prohibit RC cars while others do not so look for signs and take the time to read them before you get started.

Quite honestly even if you are in a place where it is prohibited you probably won’t have much more happen to you then getting told to go someplace else if you do get caught.

Since nitro RC cars run on fuel then they can be more of a fire hazard than their electric counterparts. This is especially true if the RC car isn’t well maintained or if you aren’t careful when mixing the fuel.

Common safety issues associated with nitro RC cars include the fuel as well as the noise they make. The vehicle uses nitromethane fuel which is highly flammable and the fumes can be very poisonous if in a confined area.

In most public parks driving your nitro RC car as fast as possible and as close as possible to people could be a safety issue as you could hit them or the noise could frighten them and cause them to respond irrationally. As mentioned earlier electric RC cars go faster than the nitro ones but since nitro is louder than people think they are going faster.

Another necessary caution is to be sure and watch out for pets and other animals. This of course isn’t just for nitro cars as everyone should make sure that they aren’t running into people and animals alike.

If you are new to nitro RC cars then it is a good idea to find a local hobby shop and ask them for some safety tips and tricks for your nitro car.

Some general tips for people new to nitro RC cars can be found in the video below.

Nitro RCs Have Limitations on Use

The risk of use in public areas is very high. Fumes generated by the nitro fuel (as described above) are very toxic, especially at high speeds. The engine makes a lot of noise as well so they can certainly upset people who are trying to enjoy a nice quiet day.

If you are driving your nitro RC car in your own neighborhood where the sound echos around the houses you are more likely to have the police called on you then you would be in a wide open field.

Even if you are on your own property, unless you own many acres of land you are still likely to get complaints from people (even if you aren’t breaking any laws). If you like your neighbors (or at least don’t hate them) it is a good idea to limit your driving of your nitro car to only daylight hours.

Common sense seems to get less and less common as time goes on. If you use a little bit of common sense it can go a long way to avoiding getting in trouble with the police or making your neighbors mad at you.

If you avoid driving your car on the city streets, public places with large crowds, driving on other people’s property and don’t run into anyone or anything you shouldn’t have any issues with using your nitro RC car to your heart’s content.

Related Post  Why Should You Vent Your RC Tires?

A park with caution signs or posted signs limiting anything with RC cars should be avoided as you certainly don’t want your RC car to be taken because you clearly disobeyed posted signs.

Sometimes it’s easier to use your common sense and only use an electric car when there are a lot of people around or if you live in a crowded area of a city with no large parks nearby.

Nitro RC cars should only be used when you have a large open area with only a few people around.

You can also find out where the rest of the RC enthusiasts run their cars and go there too. A local hobby shop is often the best place to find out about some hidden local gems.

Nitro RC cars will often have more power and will certainly be faster than the RC cars that you grew up with. Nitro RC cars can also be more challenging to control since they are often larger than their electric counterparts.With a larger vehicle it can be more difficult to avoid running it into things as it takes longer to turn or stop than you might anticipate.

At high speed, there is also a tendency to crash more often at higher speeds. In public, you won’t just destroy property but you will also destroy your car.

If you are new to using a nitro Rc car you definitely want to get used to how long it takes to accelerate, turn, stop, etc. so you don’t wreck it or injure yourself or others.

For additional driving tips check out the video below.

Nitro RC cars are not illegal (in the USA) but there are some places where they are prohibited and other places where it simply isn’t a good idea to use them at. If you are are brand new to having a nitro RC then it is a good idea to avoid any location with a lot of people or houses or businesses around.

Get the hang of your new RC car in open fields, the woods, etc. before you try and control it around a lot of other people.

Using some common sense about when and where you use your nitro RC car will go along ways in helping you stay out of the trouble with the police, your neighbors, and the public in general.