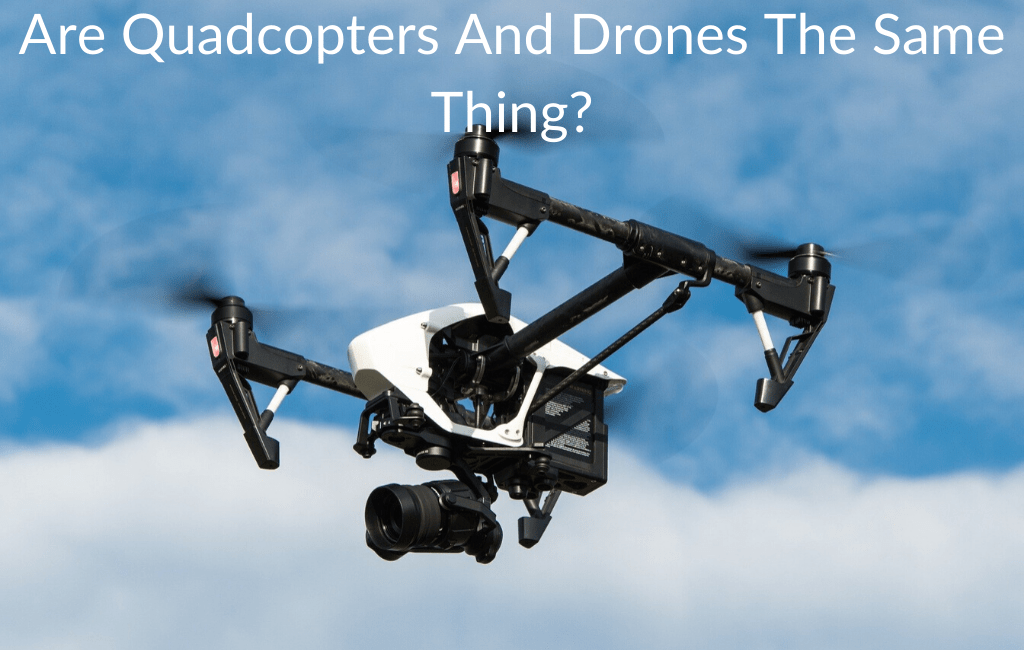 You may have noticed that both of the terms, quadcopters and drones are used relatively frequently. It may, at times, seem as if these two terms are interchangeable as well as many people use them that way, but are they really interchangeable?

Are quadcopters and drones the same thing or is there a difference?

Quadcopters specifically refer to aerial vehicles that have 4 rotating blades while the word drone simply means any unmanned aerial vehicle. So while a quadcopter is always a drone not all drones are quadcopters since some drones do not have 4 blades.

If you are talking about recreational drones then using the terms interchangeably is not that big of a deal since virtually every recreational drone is also a quadcopter. However some drones that are used by militaries and for other commercial purposes are not quadcopters because they don’t have the four blades so calling them that would be incorrect.

The correct terminology for those types of unmanned aerial vehicle is a drone.

What are drones and quadcopters?

To avoid misunderstanding and to help you locate the right recreational drones that will work best for you, a helpful thing to know is exactly what a drone and quadcopter are. Let’s define these two terms to help you understand better.

These types of aerial craft can look either like a small airplane or even like a helicopter but can come in a wide variety of shapes, sizes, and styles. They have two main characteristics that set them apart as drones: they are engine controlled, and they can fly for an extended period of time.

The quadcopter is a more exact term used to refer to a drone that has four rotors typically on the four corners of the vehicle. Quadcopters are also called a quadrotor or quadrotor helicopter. The rotors on the quadcopter each consist of a motor and propeller.

Quadcopters resemble helicopters but instead of two blades like a helicopter they have four. Quadcopters can balance themselves by the movement of the blades and not by use of a tail rotor. From the definition, it’s relatively accurate to think of a drone as a broad category and quadcopters a specific type of drone within that category.

Many other types of UAVs also fit the general description of a drone.

Uses of quadcopters and drones

Besides their structural differences, drones and quadcopters also can have many different applications. For example, drones, as a general category, have a very wide variety of applications. One of the most common of these uses is as a military aircraft. In this use, a drone delivers attacks, conducts search and rescue operations, and can even conduct reconnaissance, surveillance and intelligence missions.

In addition to military uses, drones can also be put to work in civilian and commercial purposes.

For instance, they can be used to keep track of livestock or track the progress of wildfires. They can also be used to conduct aerial surveying, and can even be used to take a photograph and to film. Drones are also used in law enforcement and to research areas where human-crewed aircraft cannot safely go.

Drones require significant regulation to keep their uses safe and predictable because of their robust capabilities and their full ranging applications.

Quadcopters can be used in many of these same implementations. When it comes to your mind of drone flying as a recreational pursuit, you are often thinking specifically about quadcopters. They are almost entirely the type of drone that is used for recreational purposes.

Related Post  Can I Fly A Remote Control Plane Anywhere?

There are many different types of quadcopters on the market today all designed to offer varying degrees of recreational uses. For instance, you can purchase nano copters to fly for fun around your yard or house, or you can invest significantly more money in state of the art technology that allows you to take photographs and aerial videos from long distances.

These recreational quadcopters are generally subject to less regulation than other types of drones. However, there are still specific rules that guide where and how drones and quadcopters can be flown. For instance, no quadcopters are allowed within a certain radius of the White House or airports. Also, to avoid frightening the neighbors, it’s wise to tell them that you will be flying a drone near their property. (although not illegal in most places).

How a quadcopter works

Quadcopters can fly autonomously through programmed waypoint navigation software and fly in any direction going from point to point or they can also be controlled manually via a remote or even your phone.

Let’s look at the quadcopter technology, which makes this possible. It’s the propeller direction along with the drone’s motor rotation and speed, which makes its flight and maneuverability possible.

In the manufacture of quadcopters propellers and motor design, the four forces which affect all flight are essential considerations. Mathematics is used to calculate quadcopter motor thrust while aircraft aerodynamics is used for propeller design and the movement of air above, below and around the quadcopter.

Related Post  The Drone Will Not Connect To The Controller

The most popular quadcopter brands

They are the global leader in developing and producing high performance, reliable and easy to use small unmanned aerial systems for commercial and recreational use. They are committed to making aerial photography and videography accessible to professional photographers, cinematographers and hobbyists alike.

The most common drones/quadcopters that you will see from DJI are:

As you can see from the current prices at the links above DJI is certainly the most expensive recreational quadcopters but they also have some of the best features on the market.

They manufacture and sell a whole range of quadcopters, including accessories such as gimbals and cameras. The Walkera branded series of items bring everything together such as the mechanics, electronics, software and aerodynamics.

These are again quite popular drones. Their drones cover from the fun to the professional photographer. The AR drone was the first quadcopter piloted through wifi network. Parrot is continuously coming up with new ways to address the UAV market.

Drones and quadcopters are very closely related and honestly using the terms interchangeably is correct most of the time since all quadcopters are actually drones. Specifically however these two terms are each slightly different from one another.

As a particular type of drone, quadcopters are generally used for recreation, offering you numerous options for enjoying a drone flying hobby. While the word drone can be used for a variety of unmanned aerial vehicles used for recreation or even military use.