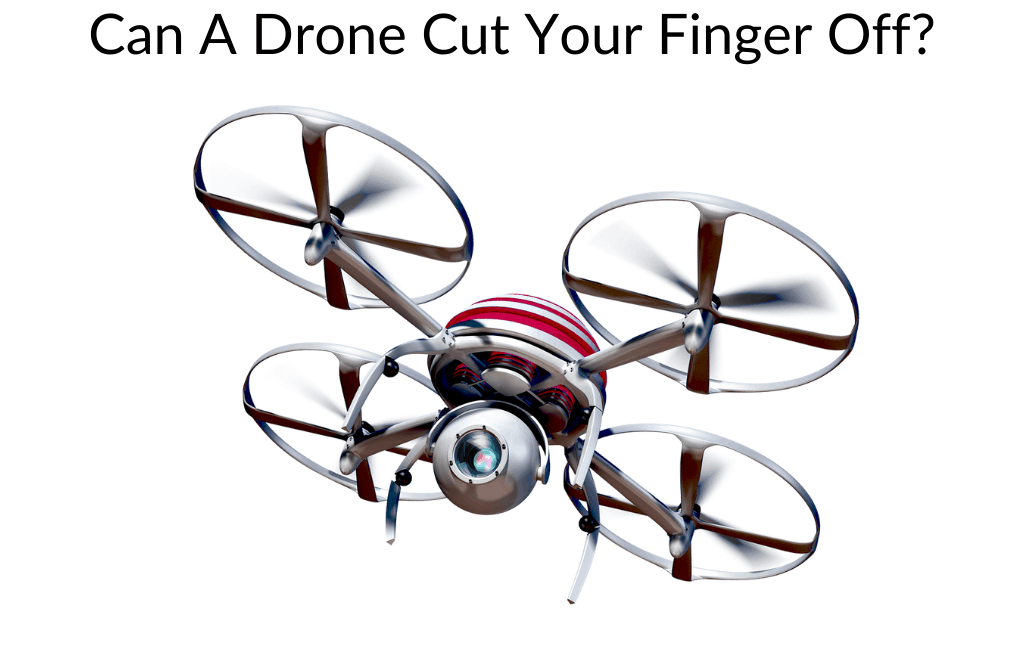 The drone’s worldwide popularity is growing each day since it is one of the most significant inventions in the aviation industry. One huge downside to drones is that they can be dangerous if you are not careful and being that the propellers turn at such a high rate of speed they can certainly harm someone who touches them while it is flying!

So, can a drone cut off your fingers?

Depending on the size of the drone’s propellers and the material that they are made of they can certainly draw blood but are unlikely to cut an entire finger off. A drone that is larger and made for commercial application with metal propellers could certainly slice a finger off but hobby style drone propellers would likely only hurt or draw some blood but not remove an entire finger!

Are you thinking about giving a drone to a friend or family member? A drone can be a perfect choice given he/she knows how to operate one and they are careful when flying it.

Drones can pose a significant danger to human safety, and abundant caution must be exercised while taking one on a flight. For this reason many countries have put in place aviation laws that govern the possession and operations of these devices.

Drones come in a variety of shapes and sizes, with the larger ones being able to cause more severe injuries compared to the smaller ones. Again, remember these are not toys, and numerous factors must be considered for their safe operation.

To see how dangerous drones can be if you are not careful when piloting them check out the video below.

What injuries can a drone cause?

Depending on the part of the body the machine comes into contact with, the injuries vary in type and severity. Some of the most often injured parts of the body are the fingers and the face.

A drone crashing into your face may severely injure your eyes leading to blindness or cause some deep cuts. There are documented cases where an accident has resulted in bodily injury. From experiments, it has also been indicated that death could result from a drone injury if the drone dropped from high enough or at a fast enough speed.

For example, when the device crashes into someone’s neck, it can cut the large neck veins or arteries resulting in acute blood loss followed by shock, which could consequently lead to death.

With the increasing number of drones being flown daily, there is a real chance of invading the  real airspace. This can result in plane accidents, especially if you lose sight of your machine.

In connection with this, aviation legislations in most countries prohibit drone flights near airports.

The major determinants of the injury sustained are the size of the drone, the type of error encountered, or the height of the fall.

What can cause an accident?

Injuries while flying a drone can occur in 2 incidences, i.e., human error and technical malfunction.

Even though there is increasing use of drones, a large portion of the operators are not adequately knowledgeable about the safety guidelines of using a drone which in turn can have serious consequences.

Human error is by far the leading cause of drone accidents and injuries. When you fly your drone to a range beyond the reach of the transmitter signal, a crash is inevitable on many drones (although some of the newer ones will automatically return to where they were launched from).

Inexperienced pilots can easily lose their line of sight on the device, and the outcome can be devastating. This can also be facilitated by adverse weather conditions such as mist or fog.

Another likely issue is losing flight direction in terms of front and rear sides, making the operator steer the drone to an unintended side. With human error, the injuries tend to be more severe since the device often falls full throttle as the functionality is not affected.

As with any other machine, drones can have technological failures. Most of these are electrical; for example, water getting into the battery system may cause short-circuiting. Cell charge depletion or battery eliminator circuit burnout are also possible occurrences.

For older devices, the propellers can break off, causing a crash as well. With any of these mishaps, the machine will stop working suddenly and will often free fall from the sky.

The injuries sustained are mainly due to the impact of falls and not from the blades, as seen in human error.

Can a drone cut off your finger?

Not all drones can sever body parts, but it is certainly true that large drones can leave you without fingers. Drones have propellers made of either plastic, glass, or carbon. The choice of material used depends on the required strength and durability.

Besides the type of blade material, the speed of rotation of the propeller influences the nature of the damage caused. The propeller speed is determined by its diameter and the motor’s velocity.

Large drones can have blade speeds of more than 700 mph. This is why they have a higher likelihood of chopping off your fingers in case one crashes on your hand or if you accidentally touch the blades while it is in motion.

These larger drones are not used by hobbyist and hobbyist drones are unlikely to ever sever a finger although if a small child put their hand in a more professional style propeller it could happen.

We have seen the possible damages that a drone can cause, but the good news is; the majority of these are preventable. The following are some of the questions that should be answered before embarking on the flight to avoid accidents:

To prevent any injury after landing, you should immediately turn off the machine and disconnect the battery. Do not try holding or stopping the blades while they are spinning.

To protect the propeller from damage and user from harm, drone manufacturers have designed different kinds of propeller guards such as;

Lap bar- which has the shape of a circle segment and is meant to guard against lateral impact. It is usually placed between the propeller and the motor. The blades are free and may not necessarily protect the operator.

Propeller cage- It is the most favorable guard as the thin bars surround the blades, thereby keeping both the user and propeller safe.

A bounded guard is the other type and it encircles the propeller such that it guards against impact from all sides except the side which remains open.

Drones can cause various types of injuries depending on the size and the part of the body encountered. Large drones such as those used by the military can easily cut off your fingers, but hobby style drones should not sever a finger entirely.

That isn’t to say that hobby drones can’t hurt you, they can. However, drone injuries with hobby drones are often when the drone flies into a person.  The plastic propellers can draw blood but should not be strong or fast enough to cut off a finger.