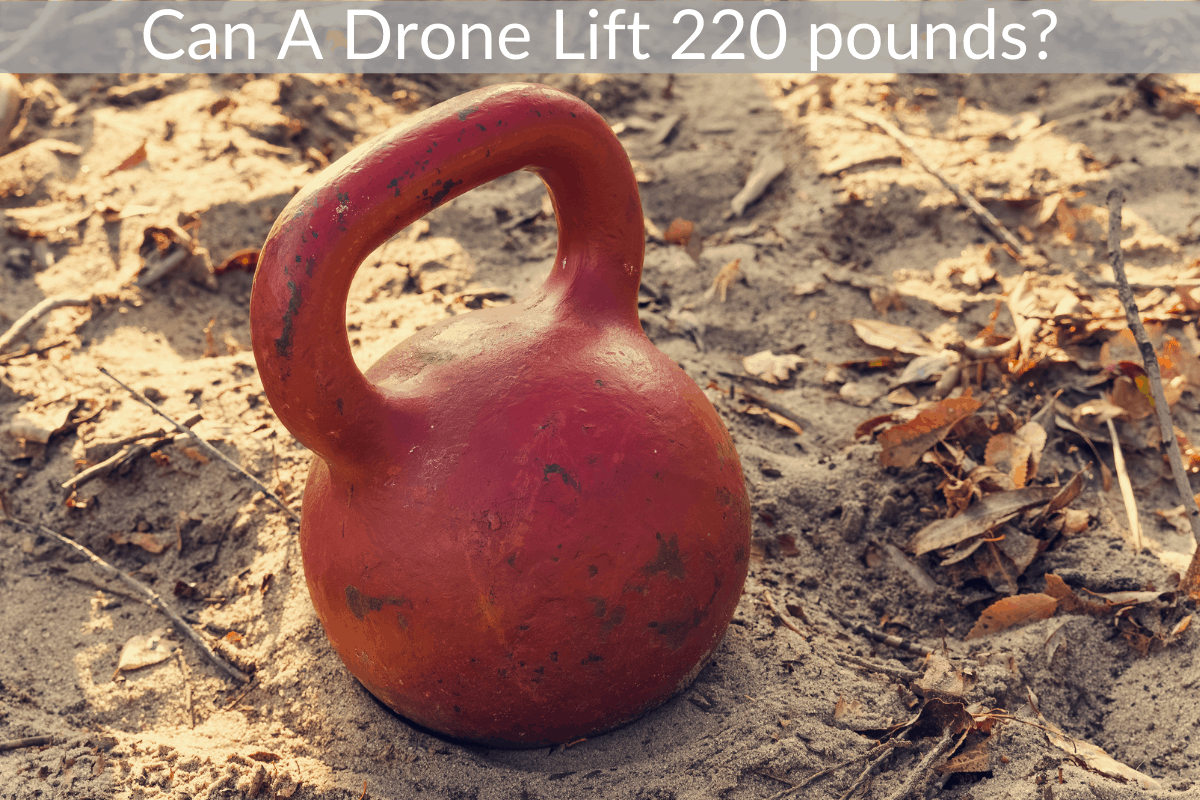 An unmanned aerial vehicle (UAV) (or uncrewed aerial vehicle commonly known as a drone and rarely as an uninhabited aerial vehicle or unoccupied aerial vehicle) is an aircraft without a human pilot on board and a type of unmanned vehicle. UAVs are a component of an unmanned aircraft system (UAS); which include a UAV, a ground-based controller, and a system of communications between the two. The flight of UAVs may operate with various degrees of autonomy: either under remote control by a human operator, autonomously by onboard computers or piloted by an autonomous robot.

Most recreational drones are not going to be able to carry anywhere close to 220lbs and in most places they will only be able to carry a few extra pounds at most. Although each drone is going to be different in how much weight they are able to hold, there are some commercial drones that can lift that much, but they are currently not available to the public.

If you want to see the best drones available for consumers, you can find them by clicking here!

If you would like to know more about if a drone can lift 220 pounds, please keep reading or check out this video!

What drones can lift 220 pounds?

Listed below are some drones that say they can lift over that amount.

EHang is a company that is based in Guangzhou, China. They develop and fabricate an autonomous aerial vehicle. This drone is the world’s first electric passenger-grade autonomous aerial vehicle that provides safe, eco-friendly and smart Urban Air Mobility. A manned version traditional drone that provides transportation for a single passenger that does not exceed 220 pounds in weight. Do not get too excited though, because 220 pounds is a combined weight of the passenger and its luggage. So during winter, you weigh more than your original weight because of your winter clothes and boots.

It was named EHang 184 because it can only take one (1) passenger with its eight (8) propellers and four (4) arms. Ehang 184 has a similarity with multicopter UAV with an X* configuration. This manned drone is not a quadcopter of course. According to their press release, it takes 23 minute flights. The battery charging time is around 2-4 hours which is interesting since it only requires a minimum charging time compared to other drones that are even unmanned. It can fly as high as 11,480 feet.

As of this time, its real price is unknown but most likely it will range to $200,000 dollars to $300,000 dollars. Though there are already helicopters that can carry passengers of 2-3 and cost $355,000 dollars then maybe this manned drone will be cheaper. As for its availability in the market, it is still unknown. This item is not yet sold in the United States.

This drone is designed to be accessible by both amateur and professional navigators. This is recommended for those who love nerve-wracking adrenaline-inducing sports. Also, to those who are not afraid of height and speed at the same time. Its primary designs are just an ordinary motorcycle with propellers on all corners. If it is not flying, it certainly looks like a motorcycle. It can even be stored in your garage. This means that whenever you like flying you do not need to have your helicopter or even an airplane. You just need this hoverbike.

This drone can only accommodate one passenger. Its weight without the passenger is already 110 pounds. Its battery is SD Li-PO and weighs 40 lbs. It can be fully charged in 180 minutes or three hours. It can fly for about 20 minutes in the air without using its reserve. It can speed up to 43.5 miles per hour. This is a very unique electric-powered vessel that brings speed, agility and stability to bother beginners and professional navigators. It is built with diverse conditions in mind that also employs built-in software that can fully control it manually as well as automated. In case you think this is unsafe, well think again. The platform that is acting as the base of this drone is equipped with a safety system that is powered by the art flight controller which is a special logical programming and computer-aided speed and altitude limiting program. The price for this drone though is around $150,000 dollars.

This drone was launched by the company Griff Aviation and can carry a payload of 500 pounds! In choosing a drone, we go with the drone that can carry our camera or other items,  but you will definitely want to look at this drone. It is made to carry so much weight. This drone is from a Norwegian based company. Reportedly, this drone weighs 165 pounds alone. Its name is from the mythical creature, the Griffin. It is a legendary beast that is a combination of the strengths of an Eagle and a Lion. It has been a symbol of vigilance and protection during those mythical eras.

This has been an amazing design used in industrial services. It was setting both its amazing strength and grace while flying. What makes it carry so much weight is the fact that it has eight strong propellers that uplift the entire drone. Though this is not the quietest of all drones it is most likely the strongest and crafty looking drone of all.

This drone is known today as an unmanned aerial system. It is a perfect host of professional applications that start with law enforcement to search and rescue operations. It is also the first drone to sell in the civilian market that was certified by both European Aviation Safety Agency (EASA) and the Federal Aviation Administration (FAA) that are known to be top aircraft certification authorities in both Europe and USA. It has three models available for the drone. They are the 125, the 300, and the 800. These models are designated due to the weight of them and the weight they can carry.

The Griff 300 is so impressive to look at, and it performs even better than expected. It is specifically designed for delivering heavy goods. It was said to have a flight time of approximately 45 minutes. Which builders could easily use to raise tools to a high location.

This drone is our best heavy lifting drone listed here. It is known as the “hulk” because of its massive size and payload capacity. Currently, it holds the Guinness book world record for the largest payload lifted by a single drone with a weight of 141 pounds in 2016. It can lift for about 551pounds of payload and be even said to increase it to 882 pounds. It can even reach up to 217 miles across a flight time that takes up to eight hours.

This drone is from the SKYF company, a company known in developing a universal platform with a high cargo carrying capacity that is available in the global market. It has excellent aerodynamic capabilities and has very adaptable heavy lifting and lowering functions. What is most interesting about this drone is it is economically efficient than those helicopters or drones with the same specification in the market.

It also uses ordinary gasoline unlike those helicopters or flying machines that use expensive aviation fuel. This makes maintenance cheaper and accessible to everyone.

Now that you know some drones are also made to carry more than a 200 pound payload, you can see why they are not available to the public. Drones have changed so much since they were first used, and have gotten a lot better since 2016. They have astonishing and undeniable amazing capabilities that are hitting our market today.