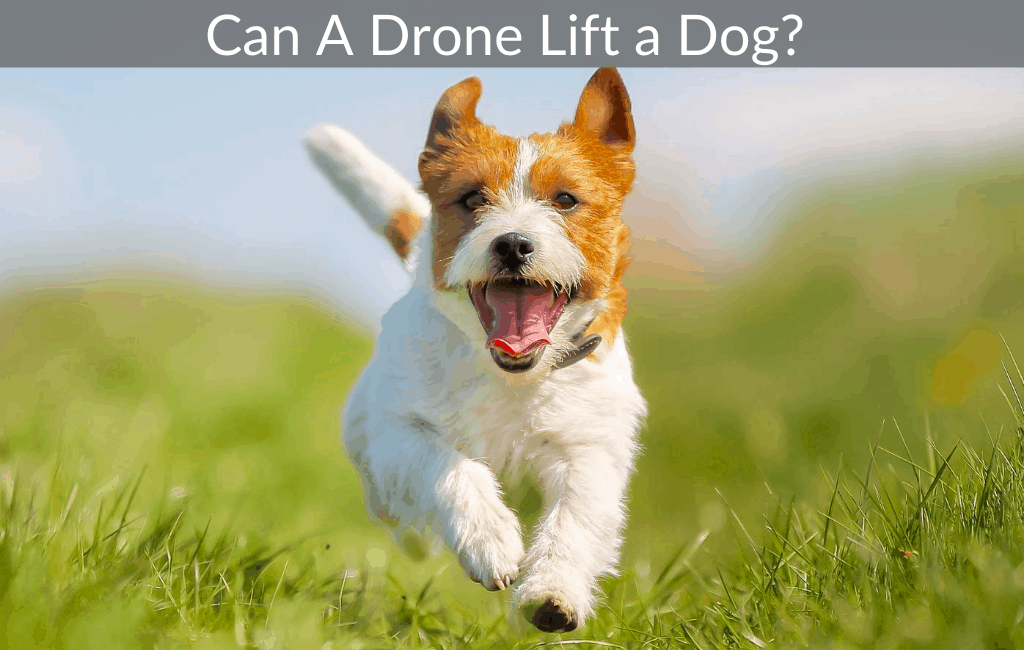 Drones have become more and more popular over the years and even now they are one of the most sought after electronic devices. Drones are popular with their many different uses but a common question that people often ask is how much can drones lift?

Of course there are many different things that people wonder if a drone can lift from humans to animals with tons of inanimate objects in between but in this article specifically we will be talking about whether drones can lift a dog as well as how drones can be beneficial to a dog owner.

They are now making larger drones designed to carry multiple hundreds of pounds so those drones would easily carry a dog but they aren’t very cost effective.

Although these large drones can carry large amounts of weight they typically are the size and cost of a helicopter so certainly far from the size of a traditional  drone that most people think of. Even if you have a really small dog that weighs only a couple of pounds picking it up with a drone is likely to scare it if not injure it in other ways because of it jumping out or trying to.

Carrying a dog safely with a drone on a recreational scale isn’t really possible but they are currently making drones that can fit people so those type of drones could certainly work for carrying your dog with you however just like those drones mentioned above, they aren’t cheap.

So although drones can pick up or carry a dog and even recreational drones can carry the weight of a small dog it still isn’t a good idea to attach your dog to one and try to take off. That’s a sure fire way to hurt the dog or the drone which obviously no one wants.

Although recreational drones won’t work well for carrying a dog they certainly can be helpful to dogs and their owner in a variety of ways. We will discuss some of those ways in the rest of this article.

As mentioned above drones can be incredibly helpful in a variety of situations and under many different circumstances so we picked out 5 different ways that drones can help dogs and dog owners and have described them below.

As time goes on the photo quality of drones have consistently gotten better and better on a very regular basis. This is the most common feature of a drone and the one that will be used the most by many people.

Since these cameras on drones have gotten better and the drones have also gotten cheaper over time it is now much easier for dog owners to capture great pictures of their dogs in action while running or playing. There is nothing quite as exciting as getting some great shots of your dog while they are having fun and with a drone this is really easy to do.

One word of caution however, you should make sure that you are good at handling the drone and taking pictures with it before you try to use it to capture images of your dog. The last thing you want to do is accidentally crash the drone or hit your dog with it injuring it or destroying your drone.

Learn how to properly take off, hover, and land, while taking pictures before you try it with a moving target like a dog.

Losing your dog can be incredibly frustrating and also dangerous as well. Although many people don’t even consider it, drones can be absolutely amazing for finding lost animals like a dog.

That is because drones work extremely well to see large areas as well as to move fast and cover large areas quickly as well. Drones are especially useful if you lose your dog in a large park or other similar place where the dog could have gone virtually anywhere as often the sound of a drone will cause the dog to run either towards it or away from it so once you spot the dog you can help push it back towards you or the search party.

Drones can be much faster at finding a lost dog in situations like these as their fast movements can help locate the animal before they get themselves into trouble.

Imagine a delivery man trying to deliver packages from your long lost family ending up being chased by dogs. Imagine the letters that were sent to you by friends ending up chewed by your dog. These scenarios are certainly sad but they do happen quite often. In 2013, many people were very excited when there was an announcement from Amazon saying that they were going to start using drones to do some delivery services.

Drones making deliveries can help keep your dog calm as eventually there won’t be any more people coming to your door to deliver a package and to scare you or your dog. They will even be able to leave your packages at a certain location so your dog can’t access it if you aren’t at home!

Drone as a Dog walker

A funny incident happened this year that showed a unique use for a drone.

Due to the fast transmission of the CoVid-19, everyone was locked down to their house and in many places were prohibited to leave it on the chance that they would be close to other people that might be a carrier of this virus.

A couple experimented with their drone and dog Nika and they were able to take their dog for a much needed walk without ever leaving the house!! Check out the video below of this happening.

This could turn bad if the battery starts to run down on the drone or if the dog is too hyper and pulls the drone to the ground but as evidenced by the video above it will certainly work for some dog and dog owners.

Ultimately the best part about taking your dog for a walk is that you get to spend time with them and hike also getting some exercise but it’s nice to know that this is an option if you are ever stuck in the house and your dog wants to go out.

There are actually many laws in most countries and states that deal with animal cruelty and if you are trying to pick up a dog with its collar when attached to a drone that would likely qualify as being cruel to the dog. Even picking up a dog with a harness on would still likely injure the dog and have you end up with a fine or jail time.

However as drone batteries and drones get better you can likely expect humans to be flying around in drones soon and when this happens it is also likely that man’s best friend will be tagging along too trying to stick their head out of the window!