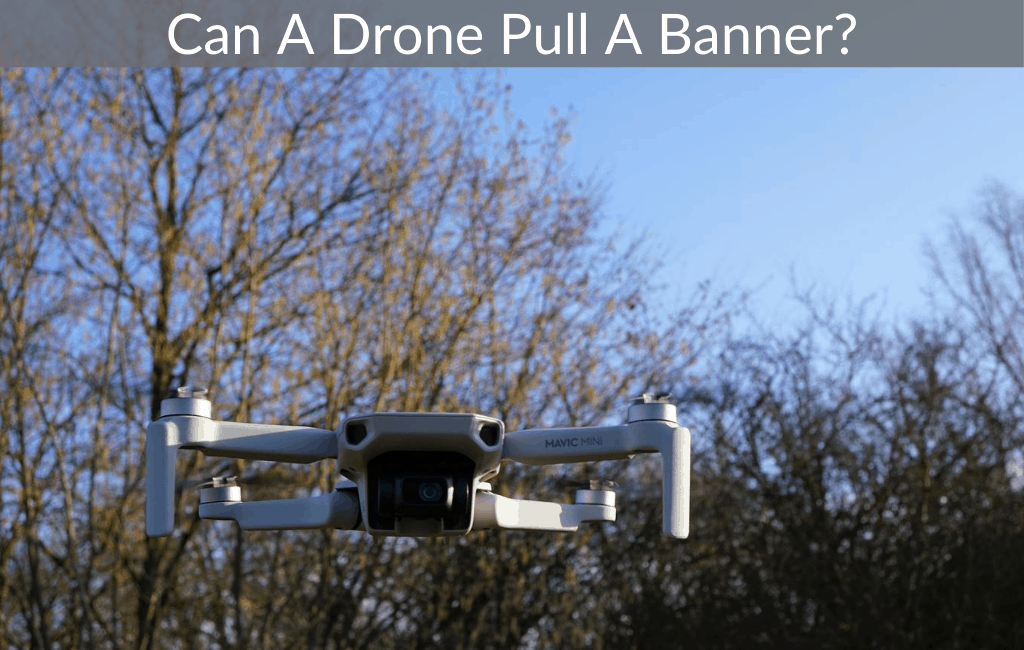 Commercial drones are now widely available for a variety of purposes, including aerial advertisements. The best thing about a drone is that it can be low flying, high flying, tiny or huge.

Their varying sizes and capabilities make them unique and possible to use for a variety of purposes.

The makers of drones can easily add lights, sound systems, cameras, microphones, or numerous sensors to any drone they manufacture. This gives them limitless possibilities for what they can do with a drone. The ability to combine different features and attributes will give different drones different capabilities.

Flying drones can stick to the side of a building, hover above the coast or a lake or go along the ground giving them agility and limitless possibilities as to how they can be modified and customized for specific purposes.

The specific purpose that we will be discussing today is whether a drone can be used to pull a banner or not.

Despite this multiple drones could easily be used to hold a banner in the air below the two drones but they would not be able to pull a banner around like you will see planes doing.

A single drone to conceivably lift up a banner as well but it would have to be attached to the underside of the drone and would likely have issues being visible since it might fold or spin on itself.

To see some of the issues that arise with a drone pulling a banner in a more traditional way you can check out the video below.

Drones can certainly be used to advertise your products or services. Aerial advertisements are one of the best and most effective ways of branding and promotion.

One such company that produces drones specifically for aerial advertisements is DroneCast. Their drones can be used in both outdoor and indoor locations and drones made by DroneCast also allow dropping products or promotional materials right into the hands of their targeted audience.

If you are looking for drones for advertising your brand or organization please be aware that not all drones are suitable or able to handle the additional weight of aerial advertisements. There are many companies in various parts of the world who provide specialized aerial advertisements as well as various types of indoor and outdoor advertisements that can be used beneath a single drone or multiple drones.

Drones have already been used in various countries of the world by major global brands like Ford and Uber to promote their company’s services and products and in the future it is likely that we will see more and more drones used for advertising.

Why use a drone for advertisements?

Drones themselves represent modernity and are futuristic in nature. They represent technological progress and are much more likely to stand out from other platforms of advertisements since they are still rarely used in that capacity.

So when they are used in advertising your product or service they give your brand a positive outlook which other forms of advertisements cannot compete with. Not only this, using drones for your advertisements makes your adverts more attractive and catches the attention of your audience because of their uniqueness.

Drones can also be used to carry and distribute promotional materials like promotional gifts as well as leaflets and brochures. In these ways, a drone is totally different and unique when compared to a simple sign or traditional advertising as it provides and adds a new dimension to your marketing campaigns.

Drones are poised to be a leader in aerial advertisements soon because of their ease of use and usefulness. Just like drones have been used in replacing fireworks on as large of platforms as the Olympics so too are drones likely to take over series advertising soon.

Why would you need a drone for advertising?

Drones have no other cost-effective alternatives and are best for a variety of business and recreational activities. Drones are widely used for these particular reasons.

They are used to take stunningly beautiful pictures, monitor an area to combat crime, used in hospitals to help reduce the spread of contagious diseases, used on streets to advertise different products or services, helps firefighters fight dreadful fires, etc.

Drones are used for all these various reasons and many more so being able to be on the cutting edge with your advertising strategy will make you look like an innovator and draw much more attention to your business or offer since other people rarely use drones to advertise.

Drones will be able to do many more things in the near future which you would probably not be able to guess. Being able to get started with drone advertising now will get you ahead of all of your competitors rather than trying to chase what is working.

If you are someone who is curious about what drones can actually do now and what they will likely be able to do in the future then you will want to keep reading the next section of this article.

The present and future use of drones

Drones embedded with multiple sensors will be able to in the near future detect tiny changes in our atmosphere and our surrounding environment. This will enable them to give us an early warning about natural disasters like tornadoes, floods, tsunamis, earthquakes, hurricanes, etc.

Related Post  What To Do With A Broken RC Helicopter

Drones will be and are in some cases already providing us with valuable emergency services. Drones are able to monitor, protect and provide data on endangered species. They are also able to give us information about traffic and help us combat crime by aiding in the catching of criminals.

Drones can also be used to provide emergency relief and aid to the victims of a region that have been affected by natural disasters or man made disasters. They can also provide information and data for analysis to take actions accordingly by providing emergency services to people most in need in situations where a human cannot easily access or it will take them more time.

In these ways, a drone can provide emergency services and help save lives as well as maintain the security and safety of people in a particular location.

Drones are already able to monitor changes in our surroundings like heat loss from buildings through thermal imaging. They are also able to undertake topological surveys and monitor the construction of large building projects from high up in the sky.

Drones are well known to be extremely useful in monitoring a particular region and undertake surveys to provide essential information to the appropriate people or authority for them to take proper actions.

Drones are already used to monitor the growth of crops and even to spread fertilizers. In the future, they could be used to monitor crop-destroying insects and crop diseases as well as possibly eradicate those by spraying repellants or by many drones being used to keep insects from entering specific areas. This would greatly benefit farmers, improve the quality and quantity of their products and benefit the global economy.

Drones can be used for advertising but pulling a banner like a plane will not work with drones. Any banners that a drone carries will have to be beneath the drone itself which in turn makes it difficult for the banner not to spin or move.

Another huge issue with drones pulling banners is that it will greatly reduce the battery life of the drone but as batteries get better and drone prices continue to drop it is likely that drones will be used more and more for advertisements in the future.