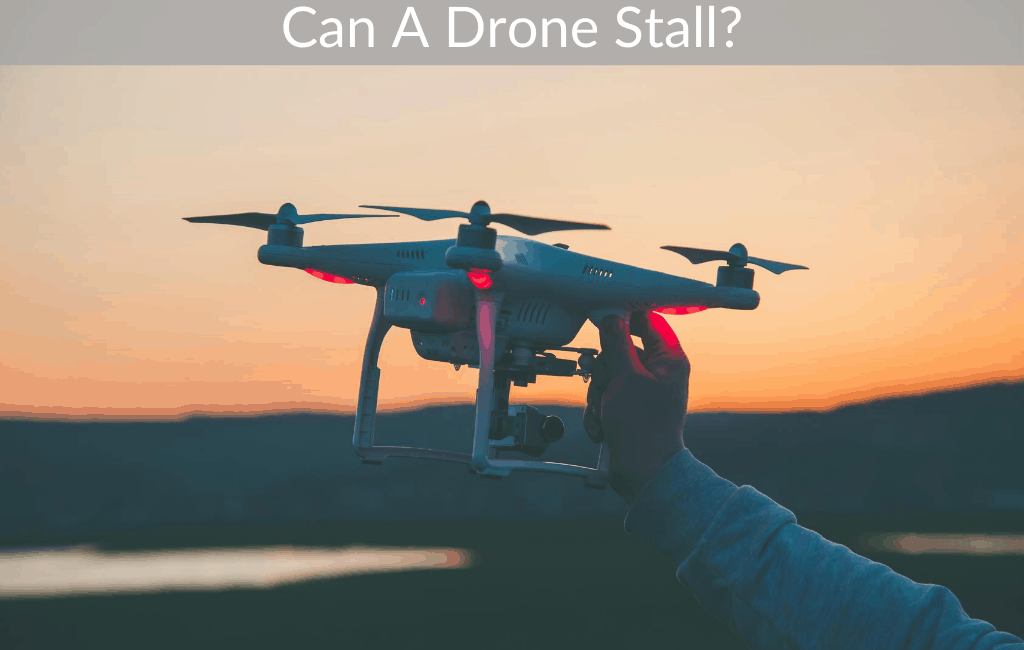 Drones are known to be very useful gadgets and they are undoubtedly a very advanced piece of modern technology. Drones are built for a variety of uses with some of the uses of a drone include delivering packages, taking aerial photographs, doing surveillance, helping in farming and agriculture, fighting wildfires, preventing poaching of endangered species, helping fight crime, doing aerial advertisements, and much more.

The purpose of today’s article is to find out if a drone can stall halfway through its flight leading it to crash down and fall from the sky and what we can do to detect such stalling of the engine. We will also look into how we can prevent drone crashes and take safety precautions to prevent our drones from getting into any accidents.

Drones can actually stall but it is a rarity and normally only happens when the drone is flying extremely high or if there is a storm blowing around dirt and debris. As long as your drone is well taken care of you shouldn’t worry about it stalling during normal use.

Now that we know a drone can stall let’s take a quick look at some of the things that can cause a drone to stall.

What makes a Drone stall?

A drone stall usually occurs due to dirty air, or when a drone is flying high in the sky and there are large dust particles or dirt in the air causing the dirty air to reduce the lift of the drone and leading its engines to stall. Stalling of a drone through its flight can also occur when the air passing through its rotors or propellers is disrupted leading to a malfunction and resulting in its crash.

If you are flying a recreational drone below 400 feet and avoid flying when it is extremely windy or stormy then you shouldn’t have to worry about these things happening to your drone.

How to detect drones stalling?

The technology behind the manufacturing of drones is advancing day to day. This means we now have many new features being added to drones likely even at this very moment. This makes them more capable of doing their jobs with the passing of time.

One such feature was unveiled only a few years back by UAVenture. They have built an AirRails flight controller which can detect when a drone is stalling while they are in their flight. It is not only capable of monitoring and detecting the stalling of a drone but can also detect and monitor free fall, altitude loss, airspeed loss, and motor loss.

UAVenture’s AirRails flight controller has an auto stall recovery mode which can auto switch to hover mode when a drone stalls in flight and helps it to land safely on the ground.

Many other factors can lead a drone to crash. We are going to look at how to avoid some of them in the section below.

Sometimes the propellers can malfunction because they are susceptible to bending as they are made of lighter materials. The propellers are usually made of light but strong materials to minimize casualty or harm when a drone collides with someone or something or crashes.

So it is always a wise decision to check the propellers are functioning properly before a drone is taken up. If you have any propellers that are bent, cracked, or are showing serious signs of wear then you will want to replace them prior to taking off with your drone.

It’s a lot easier and cheaper to replace a single propeller than it is to try and fix a drone that has crashed!

Under some conditions, especially indoors, GPS signals can be lost. So you should always check that the GPS signal you are getting has enough strength. A drone without its GPS signal is basically flying blind and you should not fly a drone under such circumstances to prevent accidents which can harm not only you and your drone but other people and their property.

It can also lead to an encroachment of their privacy and security, leading them to take legal actions against you with the appropriate authorities.

Many drones now have features that automatically have them return back to where they took off if the GPS signal is lost. For most people, buying a drone with this feature is well worth the cost.

A compass error can occur due to electromagnetic interference (EMI) or due to radiofrequency (RF). So avoid flying your drone close to high voltage power lines or cell phone towers to prevent your drone from crashing.

Loss of power can happen very suddenly in mid-flight if the batteries were not fully charged or if you use the drone for too long, leading to the sudden crashing of the drone. So you should always check to see before a flight that the drone’s batteries are fully charged, this will prevent the drone from crashing because of this issue.

Sometimes we can be in a hurry or might think that a battery less than fully charged would be able to cover the drone’s flight and we would be able to finish the job or flight pattern. Although this could be possible it’s still better to be on the safe side and not fly your drone unless it is fully charged to prevent unwanted accidents.

You can also get multiple batteries and in that way you can have all of them charged at once and then fly the drone, after a while when you see the charge from one battery is depleting you can replace it with another from your bag and in this way have less downtime between flights, otherwise, if you had only one battery then you would have to wait for that to charge completely before putting taking your drone up again.

Having extra batteries will save you a lot of time and is especially helpful in a more critical situation when you simply don’t have any time to waste.

A feature that is present on some drones will automatically cause them to return to home if the batteries get depleted to the point where the drone would crash before making it back but these aren’t foolproof as if the wind has picked up while you were flying the battery power left might not be enough to get all the way back.

In that case you are better off landing and then walking to where the drone is to prevent a crash.

You should also take proper safety precautions as given by guideline from The Federal Aviation Administration (FAA) when flying drones if you are in the United States and if you are traveling abroad or are in a different country then you should check the safety guidelines for flying drones in that particular country given by that country’s appropriate department or agency.

Flying drones are for some a recreational past time and for others a professional duty. Whatever may be your reason for flying a drone you should always make sure that you are following all of the laws regarding it and associated with it in the city, state, or country that you are at that time using the drone in.

All these measures should be taken to keep your drone from crashing and not to get into an untoward or unexpected situation with the law enforcement agencies.