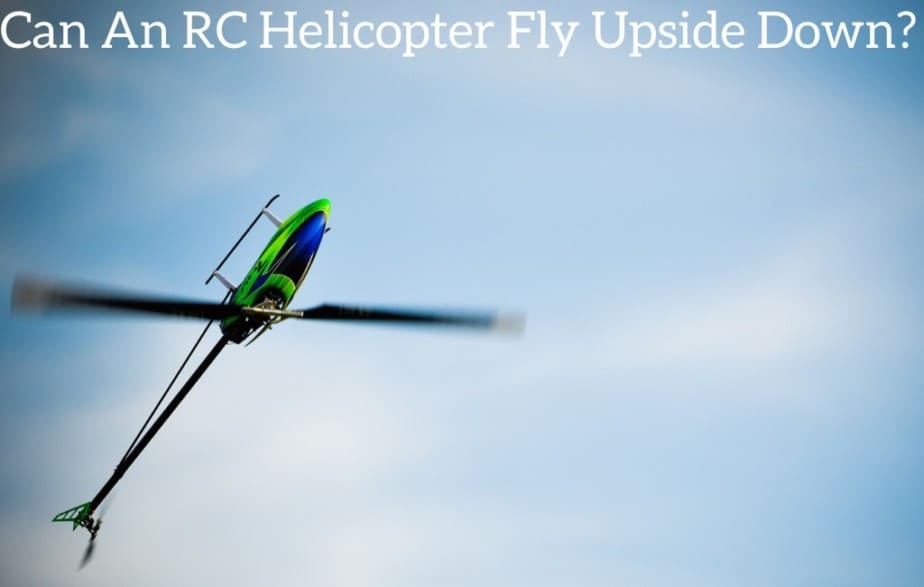 If flying an RC helicopter upside down sounds like an amazing feat to accomplish, check out what I found out about the skill.

Can an RC Helicopter Fly Upside Down?

We’ll talk a little more about  RC helicopter basics, but first, let’s get to the real question. Is it really possible to fly an RC helicopter upside down without crashing it? As we briefly discussed above, RC helicopters can fly upside down but it’s not exactly easy.

Flying an RC helicopter upside down wouldn’t be nearly as cool if all it required was a push of a button. What it actually requires is:

· Getting the helicopter into the correct position

· Getting it upside down with perfect precision

· Controlling it once it is upside down

Before we get into how to do this fancy pilot trick though, let’s talk about why an RC helicopter can fly upside down and a real helicopter can’t (or at least very rarely does and then only for a moment.)

Why Can’t a Real Helicopter Fly Upside Down?

All aircraft are able to fly by generating lift. This is an upward force that keeps the aircraft, including helicopters, in the air. Helicopters generate lift through their rotor blades, which spin at incredibly high speeds.

The rotors push air down, which keeps the helicopter up and while in theory, a helicopter may be able to fly upside down for a few seconds, but it cannot maintain that position. Take a look at a few of the reasons why this just isn’t doable in a real helicopter:

Related Post  Can An RC Helicopter Fly Upside Down?

· Engine isn’t designed for it

· Flight controls aren’t designed for it

Let’s take a look at how each of these factors contributes to a helicopter’s inability to fly upside down.

The next problem is that the rotor blades of a real helicopter are designed to flex with each blade having the ability to move up and down.

Engine Isn’t Designed for It

A real helicopter’s engine is not designed to fly upside down. Once the chopper turned upside down, the fuel and other lubricants would not necessarily be channeled to the proper locations. This could cause many problems.

The engine would need to be redesigned so that everything went where it was supposed to go even when the helicopter was upside down.

Flight Controls Aren’t Designed for It

Finally, there are no controls in a real helicopter that allow a pilot to tilt the blades of the helicopter down. This would need to be done in order for the helicopter to produce lift in the proper direction.

Why Can an RC Helicopter Fly Upside Down?

It’s all in the swashplate. Really, the key reason an RC helicopter can fly upside down is a simple device called a swashplate. This device is like a communication port between the body of the helicopter and the rotating blades of the chopper.

The swashplate has two main parts:

OK, before we get too far into piloting, let’s cover some basics about RC helicopters and how they fly.

How Does an RC Helicopter Fly?

Let’s start by clarifying exactly what type of helicopter we’re talking about. An RC helicopter is not one your 6-year-old son flies around the house that runs on a few AA batteries.

An RC helicopter is a radio-controlled (RC) model helicopter that is capable of some pretty dynamic moves. RC helicopters are similar enough to real helicopters that they operate at high speed and can actually cause pretty severe injuries if you’re not careful.

RC helicopters are generally powered by one of the following sources:

Nitro fuel was the original power source of RC helicopters, but electric powered RC helicopters have become more popular. The only catch is electrically powered choppers can’t fly as long as those powered by nitro fuel.

Although there is some variation when it comes to the controls, most RC helicopters have at least four controls. The controls are as follows:

RC helicopters are usually made from one of the following materials:

The rotor blades are generally constructed from one of the following resources:

RC helicopter pilots usually buy the helicopter as part of a kit. These models can take anywhere from 5 to 20 hours to put together. Just because it’s a model helicopter doesn’t mean it’s like a toy. The models actually have many moving parts similar to those of a real helicopter.

Related Post  Can I Fly My Drone Near A Wind Turbine?

Putting together and flying RC helicopters is complex enough that most people join a club so they can seek out help from more experienced RC helicopter pilots.

So, you’ve got the basics down. Now, for a step-by-step guide about mastering upside-down flight.

Flying an RC Helicopter Upside Down

Now that you know why an RC helicopter can fly upside down, let’s talk about how to accomplish the skill. First, you’ll need to have mastered the basic skills of flying your RC helicopter. Once you have that done, follow these steps:

1. Use your controls to lift your helicopter up to hover about 5-feet above the ground. Make sure you can hold the hover then increase the altitude.

2. Move the cyclic stick on your controls forward and increase your speed to get the helicopter to begin to make a loop.

3. Continue to increase your angle, and your RC helicopter will begin to roll forward while increasing altitude.

4. Move the cyclic stick further forward, and your helicopter will flip.

5. Move the throttle down as your helicopter flips. You want to hit mid-throttle at the exact point your blades are horizontal to the ground.

6. Move the throttle stick slightly down to create the negative pitch necessary to keep the RC helicopter upside down.

7. Use the rest of the controls in the reverse of normal to fly your RC helicopter. For example, to turn right, push the cyclic to the left.

Here is an awesome video explaining more in depth how to fly your RC helicopter upside down no matter how inexperienced you are.

Now, you can amaze all your friends by taking your RC helicopter out and flying it upside down. Just remember always to make sure the area around your helicopter is clear to avoid any injury.