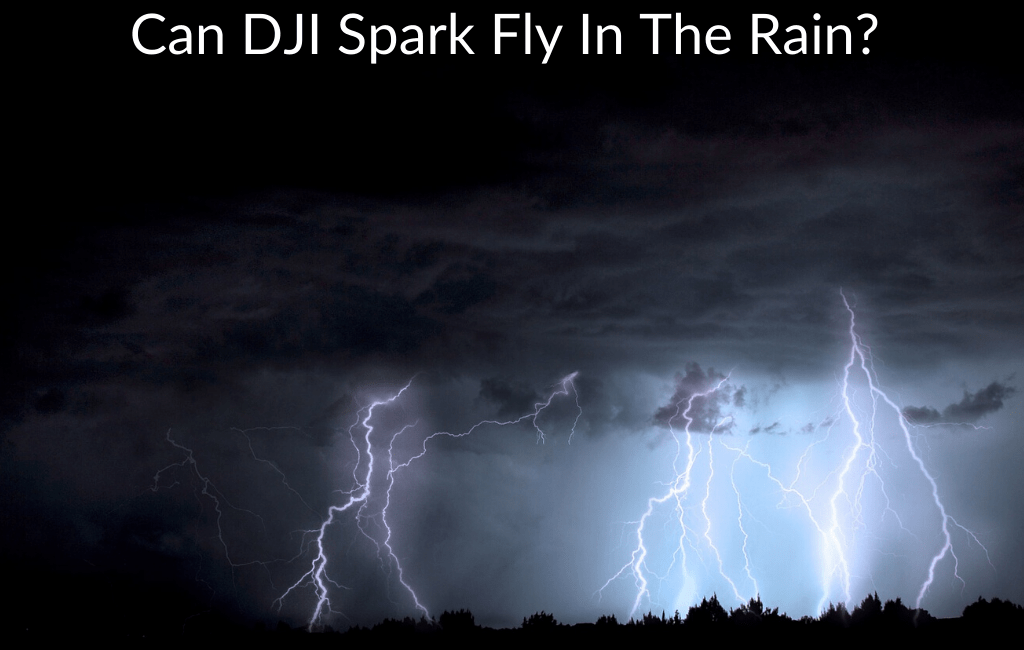 If you just got a DJI Spark or you’ve had one for a while it is quite likely that either you’ve seen other drones flying in the rain or you are at least curious whether yours can be used in the rain. With the great camera that it has on it it would certainly take some amazing photos or footage of a storm front but would that hurt your Spark?

Unfortunately the DJI Spark is not waterproof and should not be used in the rain. You might be able to fly it a few times in a light drizzle but all it takes is the wind blowing the wrong direction and you can seriously mess up your drone.

If you want to see some of the waterproof or water resistant drones that are currently on the market you can check out the video below.

Can DJI Mavic fly in the rain?

The DJI Mavic is an amazing drone that has tons of great features. Anyone who owns a Mavic is certainly lucky to have it and will be happy with all that it does. However what we are here for is to find out whether you can use the Mavic in the rain or not.

Related Post  What Is The Farthest A Drone Can Go?

You actually should not use the Mavic drone in rain even if it is a light drizzle. The Mavic is not water resistant at all and the electronics can easily be damaged by coming in contact with any water.

Despite the fact that the DJI Mavic is not water resistant and shouldn’t be used in the rain that doesn’t mean that it isn’t a good drone to purchase or own. It is a powerful drone that can be used for a variety of situations but rain is not one of them.

Can you fly the Mavic Mini in the rain?

The Mavic Mini is a great little drone that is perfect for new drone users. You will get tons of amazing features from DJI while still not spending a fortune. Another huge plus to the Mavic Mini is that it doesn’t have to be registered with the FAA since it is below the .55lbs limit.

Despite the Mavic Minis great features it is actually not water resistant and should not be used in the rain or any moisture at all. Some people have reported using it in the rain without causing issues but often issues caused by moisture won’t show up for a few weeks or months when the drone will just die completely.

Despite the Mavic Mini not being water resistant it is still a great option for many people who prefer smaller drones.

Can you fly the DJI Mavic Air/Air 2 in the rain?

The DJI Mavic Air and the Mavic Air 2 is another great option for those people who don’t prefer the full size drones but still want the great features and design from DJI.

Despite its many great features the DJI Mavic Air and Mavic Air 2 are not waterproof or water resistant at all. They should not be used in the rain no matter how light it is and using them in the snow is not recommended either.

The Mavic Air and Mavic Air 2 are both middle of the read drones in both size and price and are great options for those who want a drone that is bigger but not super large and expensive.

Can you fly the Mavic Pro in the rain?

The Mavic Pro should not be used in any sort of rain, snow, sleet, etc. The moisture will easily get sucked into the drone which will cause it to stop working either entirely or cause portions of the drone to stop working.

It is certainly tempting to take your Mavic Pro up in a storm to try and get some amazing pictures but if you do you are likely to damage your expensive drone which is not something that anyone wants to do.

Can you fly the Mavic 2 Pro in the rain?

The Mavic 2 Pro is the next generation after the one discussed in the previous section. The Mavic 2 Pro was released in August of 2018 and is a great choice for a drone. Despite it being a relatively recent addition to the DJI line that doesn’t mean that it is water resistant either… but is it?

The Mavic 2 Pro actually is not water resistant either and according to DJI should not be flown in the rain! The Mavic 2 Pro has an air intake that then flows right on top of the motherboard so if it pulls in rain that rain is hitting your motherboard and it won’t be long until you start having issues!

Just because some people have posted videos of them using this drone in the rain doesn’t mean that they didn’t damage it while doing so! DO NOT use your Mavic 2 Pro when it is raining or snowing or you will destroy your expensive drone!

Can the Phantom 4 Pro fly in the rain?

The DJI Phantom 4 Pro is one of the most recent releases in the Phantom line and it was quite well received but since it was released in 2016 it has begun to show its age in regards to the design and features and it could certainly do with an upgrade in both.

Despite it being a little bit of an older model and not being upgraded recently the Phantom 4 Pro is still quite popular and well liked by many people but is it waterproof? Can you use it in the rain without damaging it?

The Phantom 4 Pro is unfortunately not water resistant and by flying it in the rain or snow you risk damaging or destroying it. There are some covers on the market that say they waterproof it but if you expose your Phantom to water you will lose your warranty from DJI and any damage is up to you to fix.

Losing the warranty is a big deal for many people so if you don’t want to risk losing that or risk damaging your drone then you will not want to fly it in the rain or in any other moisture either.

Ultimately there are no DJI drones that are rated as water resistant or waterproof as of now. In the future as waterproofing technology advances it is likely that eventually DJI will have waterproof drones but as of now none of them should be used in the rain, snow, ice, or any other similar events.