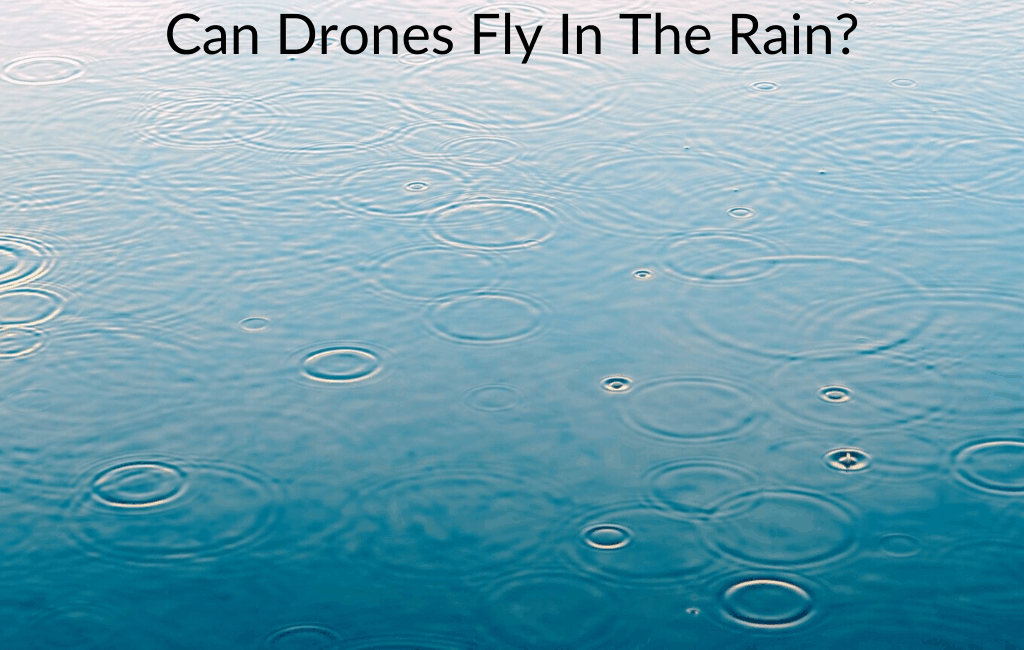 If you have ever been looking forward to a weekend flying your favorite drone all over only to have it ruined by one of those all day rains then you have probably wondered if you could just take it out in the rain anyway. Afterall, drones are pretty sturdy devices and can withstand a decent amount of abuse so they should be able to handle a little bit of rainfall… right?

Unfortunately drones should not be used in the rain unless they are entirely waterproof. Most drones will allow the rain to get in through the air intake which in turn will mess up the electronics inside and ruin your drone.

Now i know that right now some of you might be screaming at your screens saying that you took your drone up in the rain before and it was “just fine” but was it really? I’ve dropped phones into puddles before and they still worked afterwards but does that mean that I should keep getting my phone wet? Obviously not!

The same is true with your drone!

For more information about why this isn’t a good idea you can check out the video below.

Can drones fly in the snow?

Now that we know that you shouldn’t use your drone when it is raining outside what about snow? Afterall, snow is a lot different… right?

You should actually not fly your drone in snow as the moisture from it can damage your drone just like flying it in rain would.

You can get away with flying your drone in snow more than in rain since the drone won’t get as much moisture inside from snow as it will from rain however, flying it in the snow is not good for your drone long term and will likely cause problems in the future.

If you want to take your drone up one time in the snow to capture a spectacular picture or two that would likely be fine and not damage it permanently but if you fly your drone in the snow repeatedly it will eventually cause it to stop working.

Being that DJI drones are the best of the best and the most expensive they are surely waterproof… or are there?

DJI drones are actually neither waterproof or water resistant! Their drones are made well so they can withstand some abuse of flying them in conditions that they shouldn’t be flown in but it will eventually cause them to stop functioning properly or working entirely.

There are a few different drones that are waterproof that you can currently buy but none of them are made by DJI. It is certainly conceivable that as waterproof technology advances DJI will eventually get a waterproof drone but as of now that hasn’t happened.

One of the only drones that is currently available that is waterproof is the Swellpro Spry (found here) but its reviews and features are less than stellar and it is quite expensive as well.

Can drones fly in bad weather?

As we have discussed earlier in this article you should avoid flying drones in rain or snow but what about other weather conditions that are deemed “bad” can you fly your drone in those conditions?

Drones can fly in a variety of conditions as long as there is no moisture present but bad weather can often be more of a safety issue for the drone pilot than for the drone itself.

As long as it isn’t raining then you can get away with flying your drone in virtually any weather but just because you can fly your drone doesn’t mean that you should or that it is safe to do so. Flying your drone in a lightning storm might be fine for the drone but you could easily be injured or killed so you probably shouldn’t do it.

The same holds true tornados or other approaching storm fronts. It might not currently be raining but if the storm is approaching where you are controlling the drone from you should bring your drone down and get to safety.

Can drones fly in high winds?

High winds is something that many people face all of the time in their area. Some places in the world (or even in the United States) have much stronger winds on a regular basis than other places do. If you live in a place that is known for its high winds or you simply find yourself facing a windy day and you want to fly your drone, knowing whether you can or should fly it is important.

You actually can fly drones in high winds but you have to be extremely careful. High winds could easily blow your drone into trees, buildings, etc. so if you are flying on a windy day you should only use your drone in open areas.

Everyone also has a different definition of high winds so some people might think that 10-20MPH winds is high while other people don’t call it high winds until it is gusting over 30-40MPH. Basically as long as you are careful with your drone and aren’t flying close to anything then you can take it up in high winds (although it will be harder to control.

What is the max wind speed to fly a drone?

Now that we know that you can use your drone in high winds the next question you likely have is “how high”? Knowing how high of winds you can safely use your drone in will help you keep it safe from crashing or getting overpowered by the wind.

That is just a general guideline however since if the wind is gusting from 10-30MPH it would still likely be safe to fly your drone since you could just not fly it into the wind when it is gusting at those higher speeds.

If you have ever seen a bird trying to fly into the wind and not going anywhere that is what your drone will look like if you fly it in winds that are too strong for it. It will be impossible for your drone to move and the batteries will quickly die as well leaving you with a drone that is running out of juice with no way to return to you.

Drones can handle a wide variety of different weather conditions but the main thing that they don’t handle well is moisture. If you aren’t careful when flying your drone you can easily damage or destroy it by using it in rain or snow or flying too close to obstacles in high winds.

To keep your drone safe, only use it when there is no chance of precipitation and when winds are not expected to be higher than 2/3rds the maximum speed that your drone has.

Always be sure to remember that drone batteries will drain much faster in bad weather so don’t go too far in the air or away from the controller to help eliminate the risk of it crashing.