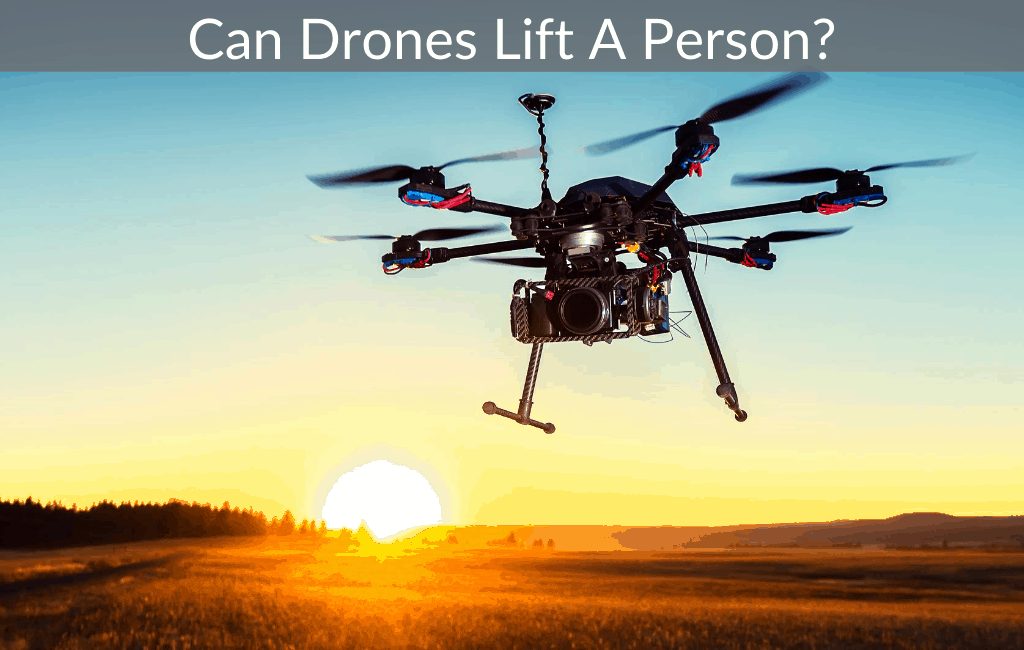 Drones have been around for quite some time with the first unmanned aerial vehicle actually coming out during World War I. Drones have certainly changed quite a bit since then as technology has continued to advance at a rapid pace.

While drones used to be only made by large companies and used by governments there are now many smaller drones that are owned and used by millions of individuals in the USA alone.

In regards to whether a drone can lift a person it really depends on the type of drone.

Government drones can carry ammunition, bombs, etc. which weigh much more than a person so they could certainly carry someone without any issues. On the other hand recreational drones such as those used by people all over the world are much too small to pick someone up.

There are now all kinds of drones that can make pizza and cake deliveries, as well as some that  can carry a person. An example of a drone that can carry someone comes from the Freefly system that is known as one of the best heavy lifting drones. It carries a total payload of 40lbs. Though a person with this weight is likely only a 3-5-year-old child it’s always a good thing to know such drones exist.

What drones have lifted a person?

There is actually a good amount of footage of a drone carrying people and even full sized adults have been carried by drones as well. In the video below it shows the EHang 184 which is a drone that is actually designed to carry a person comfortably.

This drone debuted in January 2016 and it looks like a mini-helicopter designed to have a human passenger. It is only capable of flying for approximately 25 minutes but it can fly around speeds of up to 60 miles per hour. Its passenger must be 220lbs or less but it is likely that the distance it can travel and the weight will increase as technology advances.

Is it possible to carry more than one person in EHang 184?

Although it is possible to carry more than one person in the EHang 184 the more weight that it has to carry the shorter the flight time will be. This is because this drone is actually electric not powered by gas so when it requires additional power to pick up more weight or to go faster then it will shorten the flight time significantly.

It is likely that in the future drones will become a much more important part of our lives as being able to take a drone everywhere is something that could conceivable happen soon. While self driving cars seem to be the wave of the future it’s just as likely that self flying drones will be.

Can you imagine how much money could be saved if another road never had to be patched or built ever again!

Everything about the EHang 184

EHang is a company that is based in Guangzhou, China. They develop and fabricate an autonomous aerial vehicle. This drone is the world’s first electric passenger-grade autonomous aerial vehicle that provides safe, eco-friendly and smart Urban Air Mobility. An manned version of a traditional drone, the EHang 184 provides transportation for a single passenger that does not exceed 220 pounds in weight.

220lbs is likely just the beginning as well because as technology advances this could easily turn into a multiple person drone and eventually even a family drone!

Currently the 220 pounds is a combined weight of the passenger and their luggage. So during winter, you weigh more than your original weight because of your winter clothes and bootS as well as anything else that you might be carrying with you.

Related Post  How To Hang An RC Plane From The Ceiling?

The drone was named the EHang 184 because it can only take one (1) passenger with its eight (8) propellers and four (4) arms. Ehang 184 has a similarity with multicopter UAV with an X* configuration but this manned drone is not a quadcopter of course. According to their press release, it can be used for up to 23 minutes of flight and its battery charging time is around 2-4 hours which is interesting since it only requires a minimum charging time compared to other drones that are even unmanned.

Moreover, it can be controlled entirely through a mobile app. In truth, passengers only need to carry out two commands. These are “take-off” and “land”. Once the details of the flight have already been set, the Ehang 184 automatically lifts off in a vertical position and uses GPS to keep you on the path.

Structure of the EHang 184

The EHang 184 is made up of composite materials together with carbon and epoxy. There is only one seat that can be found in the cabin with one control pad and an air conditioning system. A reading light can also be seen inside the cabin. On its four propeller arms, lights are placed there which are green which is located at the back arm propellers and red at the front propeller.

It flashes a light to signal and it also has a downward-facing video camera and a headlight. Interestingly, it also has a compartment that a 16 inch backpack can be fit in as well.

As of this time, its real price is unknown but most likely it will range somewhere between 200,000 dollars to 300,000 dollars. Though there are already helicopters that can carry passengers of 2-3 and cost 355,000 dollars it’s quite likely that this manned drone will be cheaper. As for its availability in the market, that is also still unknown as it currently is not sold anywhere.

As of now, laws in every state and country govern all aircraft. These laws vary from country to country but often the clearness of the information and how it applies to this aircraft is questionable. There is a passenger however the passenger cannot control the aircraft so that makes the licensing requirements difficult.

Honestly, it is quite confusing since the technology is so new. It is a manned vehicle but is not controlled by the passenger. Therefore, the use of this drone is very much complicated and will likely stay that way until these types of drones become more mainstream.

Does it need a licensed pilot to fly it or just a courier? Could it be used as a taxi or Uber to help people get home or would every person who uses it have to take a course?

All of these and many more questions are likely to have to be figured out in the next few years.

Yes, there are actually quite a few drones that are similar.  We have the Griff 300 Drone that is the first unmanned aerial system designed to lift a weight of up to 496 pounds. Though its actual payload might be less than that but it is already a promising drone product.

Do not get too excited, they are not sold commercially as of the moment because of some legalities to be considered.

Today, as technology is becoming more advanced it is likely that in a few short years there will be all kinds of robes flying above us that aren’t just used for fun but also for transportation and deliveries. However this time, drones that are manufactured will not be the kind that can be held in your hands but instead they will be large enough to carry a person or persons.

There are  manufacturers around the globe who have been building drones for all sorts of different purposes. These range from simply taking great photos and videos to delivering a parcel and to the extreme, for transportation or even carrying truckloads of products.

It is likely only a matter of time before we see drones that can carry larger payloads that will have even larger motors or even stronger ones that can be used for virtually anything that we need.