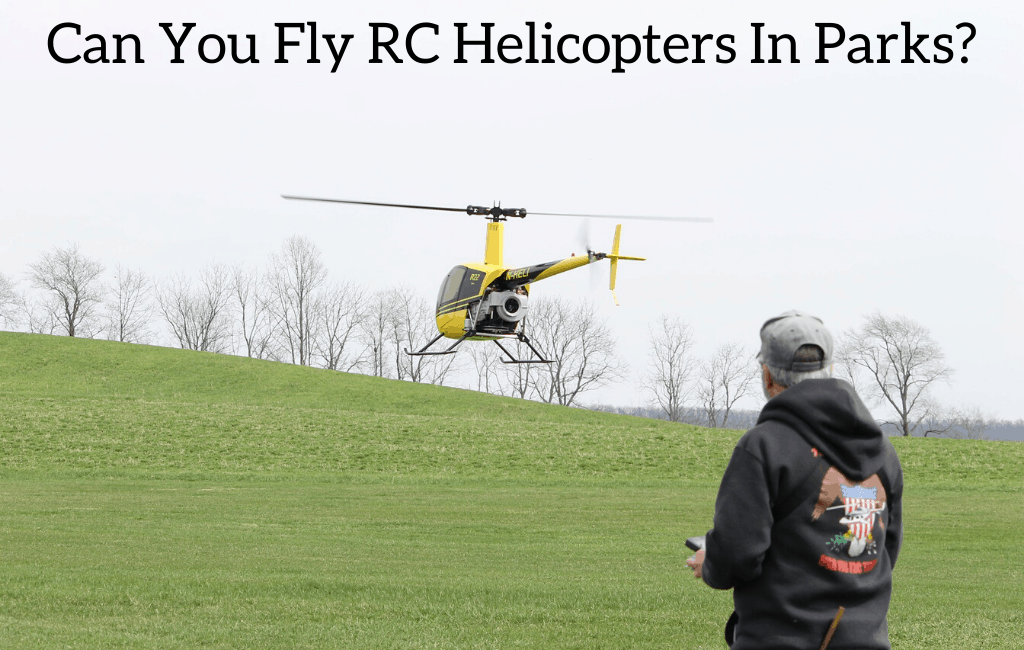 A radio-controlled-aircraft, also known as an RC plane, RC helicopter, or drone are small flying devices that are controlled by the remote of the operator on the ground by using a hand-held radio transmitter. RC planes, helicopters, and drones are tons of fun to fly but it is important to know where you can fly them at and where you shouldn’t. That is what this article is all about.

It is important to check your local laws to make sure that you are following them.

If you fly your RC helicopter in a place where it is forbidden then you are opening yourself up to fines, your helicopter being confiscated, and more. Often you will just be told it is against the law and if you cooperate it won’t be a big deal but you might have those other things happen so knowing the laws is important before you ever take off with your helicopter.

Things to consider when choosing a spot to fly

Sure, you can fly your RC helicopter in most parks, but it is important to be aware of your surroundings and obstacles that could cause your helicopter to crash or fly off course.

You can really fly your helicopter anywhere that is free from crowds and obstructions as long as it isn’t against the local laws. That only applies to public areas however as you can’t just fly your RC helicopter on someone else’s property without their permission.

If you upset enough people the laws could certainly be changed so it is a good idea to just avoid people all together.

It is also important to make sure that anywhere where you fly your RC helicopter is safe for both you and your copter. Just because you can fly it in a certain location doesn’t mean that you should!

Avoid places with lots of trees and power lines as well as any place that is experiencing high winds and you should be good to go.

Rules for flying in parks

Of course, you can fly your RC helicopters in the parks, but you need to be aware of some rules that you should follow. Some of those are:

Make sure your flight path is away from all of the people.

Never fly your RC helicopter close to anyone or over the top of them. It is important to remember  that small to mid-sized RC helicopters can still lead to significant damage to a person or the property if something goes wrong and the copter crashes.

You should always choose a flight path that is entirely away from everyone as safety is a must for flying your RC helicopter at a park.

If you see the parking lots are over-crowded with people, then it is a good idea to avoid that park entirely and find a different one or come back another day. Just don’t fly your RC helicopters in a crowded park and you will save yourself a lot of hassle.

Some public parks have their own large spaces that are specifically set aside to fly RC helicopters, planes, and drones. Not all areas will have these places but some will.

It is important to remember that even in designated places like these the FAA rules for flying RC aircraft still applies.

The best places to fly your helicopter

There are a few great places that you can take your RC helicopter out for a flight and not have any issues. Depending on your location and what is near you will determine which of these will work the best for you.

I think public parks are the best places to fly an RC helicopter for several reasons. Many parks will have hard surfaces such as paths, courts, or parking lots that can easily be used to take off with your helicopter. Even if the park doesn’t have any of those things most parks will have tons of flat grassy areas that you can use to take off and land your copter.

Another good thing about public parks is that they will often have a ton of open area. This makes them ideal for learning how to fly or trying some new maneuvers without having to worry about running into anyone or anything.

You still have to abide by the FAA rules on height and other restrictions but you don’t have to worry about a park’s rules or about annoying people that are at the park.

Of course some private land works better for flying a helicopter than others as wooded land is difficult to maneuver in without getting your helicopter stuck in a tree!

A beach can be an amazing place to fly a helicopter when they aren’t crowded with people. That normally means this option is really only open to someone during cooler times of the year or if you have a beach that is well off the beaten path that not many people know about or go to.

One huge downside with beaches is that you have to be very careful not to fly too far out over the water. When your battery dies your helicopter will go down and if it goes down in the water you will likely damage it or lose it entirely in the water.

If you don’t have a lot of experience flying an RC helicopter then a park is probably the best option for you. It is important to learn the basics of flying before you take on a more challenging location like a beach or even a backyard. Keeping an RC helicopter in a small yard is much harder than using it in a wide open space!

If you want to learn some tips and tricks for flying your RC helicopter then you will definitely want to watch the video below.

Hopefully, you now have a much better understanding of where you can fly your RC helicopter as well as important things to consider when you are flying it.

Flying your helicopter in a park is a great way to spend an afternoon but you have to make sure that the park has enough open places as well as not very many people around to avoid flying near to them or over them.

No matter where you fly your RC helicopter at, you need to always follow any local laws as well as the FAA rules for all unmanned aerial vehicles. Following these rules will help keep you and others around you safer as well as allow you to have more fun since you aren’t worried about possibly breaking laws or getting in trouble.