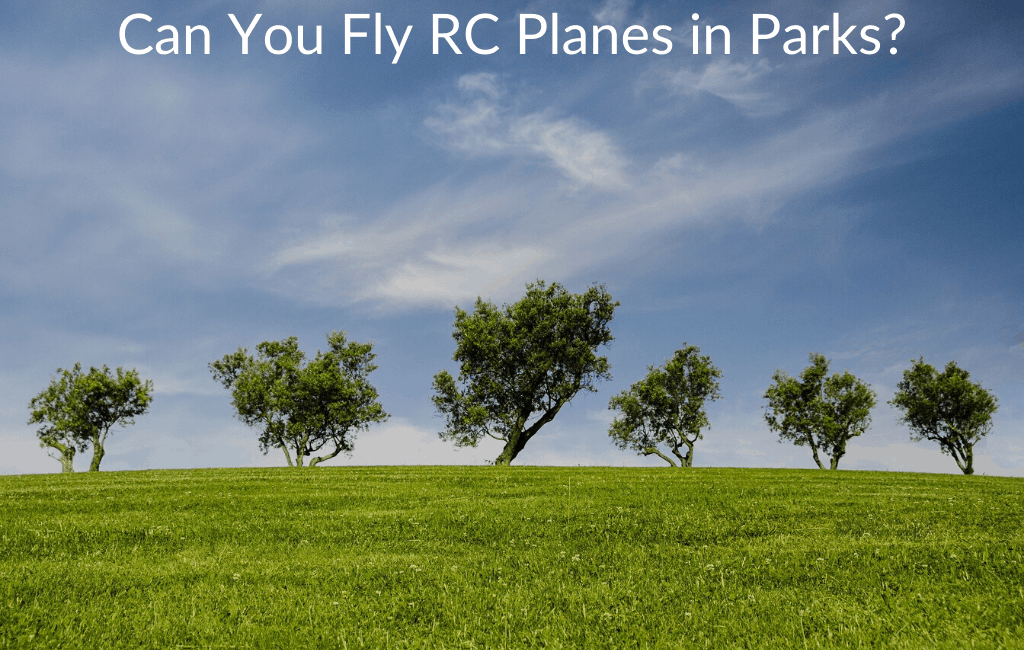 If you recently got an RC plane you may be wondering where you can fly it at. Most people won’t have a yard that is big enough for an RC plane to take off in and you can’t exactly use the street or sidewalk as a landing strip either. So, where can you go?

Most people’s first thought is a park or other large grassy area but can you fly RC planes in parks?

While there is no law expressly restricting flying RC planes in parks, there are some regulations that are given by the Federal Aviation Administration (FAA), that can limit flying an RC plane in a park. Some of these restrictions that might affect your flying are, not flying over a group of people and not flying near the airport, that’s if the park is near an airport.

This suggests that RC pilots can have fun in a park as long as there are large areas where there aren’t people that you would be flying over but some parks do restrict RC planes, drones, etc. from being used so be sure and pay attention to any posted signs as well.

Public parks are large and free, and their open spaces make them perfect for enjoying the hobby of flying RC planes. Yet while some parks are tolerant, sometimes, parks in rural areas that rarely see congestion, and even parks in cities might frown at you flying your RC plane there. So, while RC planes can be flown in parks, there are concerns about it.

What Are Those RC Flying Concerns?

The non-flying public might be concerned that RC planes can be:

1. Destructive: the non-flying public is weary of RC planes crashing and the destruction that could come with this.

Related Post  How to Land RC Planes on Grass

2. Noisy: when an RC plane is not working well, the sound it makes might be disturbing to others.

3. Threatening to manned planes: for a park that is close to an airport with manned aircraft, there will always be fear of possible midair collision

Are There Places to Fly If You Can’t Fly in a Park?

If you don’t have a local park that is large enough or not crowded where you can fly your RC plane then you will have to look elsewhere. Some popular places where people will go to fly their RC planes can be found below.

There are a number of RC flying clubs around that you could become a member of. There are some online as well so simplu search for their website and you might be lucky enough to find one not too far from you.

If there is, do consider joining, especially if you’re thinking of flying RC powered planes for a long time to come. Even if there could be a club nearby, but you don’t intend to join; their field will often work great to take off and land on and many clubs will let the public use them or only charge a small fee.

Going to a plane club is also  a good opportunity to share ideas with other pilots as well as learn more about the hobby.

While it’s true that most of us are using 2.4GHz radios these days, it’s still very possible that you have bought an RC airplane that utilizes a traditional MHz radio system. This is where you have to be very concerned about radio interference from or to other flyers nearby. If you and another flyer are both using an MHz radio within close range (a mile or less), then you need to be sure about who is on which frequency.

It’s awesome if you have access to some private open land as that can be the perfect place to fly your RC plane. Whether it’s your own, a friend’s, or even a farmer’s – then you can fly from this so long as you have permission to do so. Private land is the sweetest option and is even better than flying in the park because you are without regulations; it leaves you free to try new things and not worry about anyone saying anything.

Related Post  Are Quadcopters And Drones The Same Thing?

Of course, it could be that you’ve bought an ultra micro type electric RC plane and that your backyard is big enough to fly it in. Lucky you, you’re in an enviable position!

You can fly your plane in a public area, but these will depend on the size and type of your plane. Inasmuch as parks can be frowned upon, giving the right situation, you might be free to fly your plane in other public areas. Other possible places are sports fields, ballparks, beaches, open hillsides, etc.. Basically, any open space that is sure to be empty of people, plus you must be careful, and you must be sure about their stance on the matter.

Do’s and Don’ts of Flying in a Public Area

Safety is a prominent thing to keep in mind when flying in a public area. These following recommendations should help you.

As strange as it might seem, not everyone in the world enjoys watching an RC airplane zooming around the sky. It only takes the wrong kind of person to complain to a local authority, and that location can quickly and easily be shut down to pilots.

The obvious rule is wherever you decide on your flying location needs to be open and spacious. The size of your plane will determine what size area you need to fly in as well. For instance, a ballpark would be a good place for a 40-inch wingspan electric RTF airplane while larger planes would need a much bigger location.

Basically, you need an open space clear of any threat or nuisance to people or property. Hence, you absolutely have to check regulations and laws against RC flying. When you do not find any in an area, you can fly to your heart’s content.

Where is the sun in the space you’re settling for? This is another major consideration. You wouldn’t want the sun being right in your eyes when you are flying or taking off/landing. You should look for a place where the sun is behind you, so there’s no threat of losing your line of sight while you’re flying.

Should you get insurance?

Public liability insurance is another crucial point you have to consider; you will likely want to get RC flying insurance. If you’re flying on private land, it might not be really critical for you but it still is a good idea to have it. As a member of an RC club, this insurance is a must during registration in most places.

Where it’s most crucial is if you are flying in a public park. RC flying liability insurance protects you from things that could happen in unfortunate circumstances. In the USA, this function is covered by the Academy of Modern Aeronautics.

Another thing that will give you more peace of mind is third party liability insurance. Make sure to study it carefully and as well get on a call with the organization for further inquiries.

Although you can get lucky and find some parks to fly in, the reality is there are parks that won’t grant you permission. This is especially true in big cities or places like that.  However, you’re sure to find suitable places to fly in as long as you stick to the above recommendations.

No matter where you choose to fly you should always makes sure to stay away from people or other obstacles and be especially careful when taking off or landing.