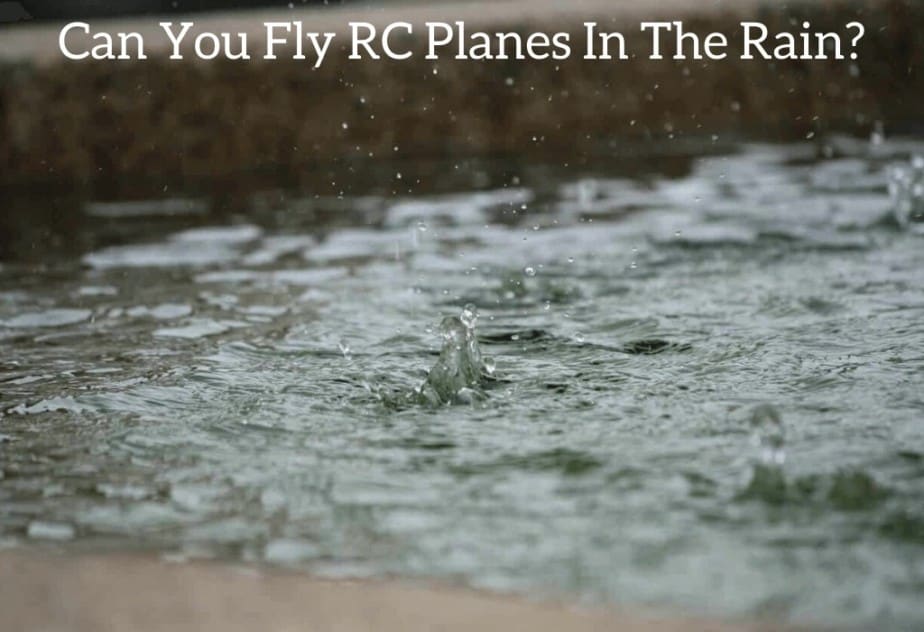 There is something that just sounds so invigorating about flying your RC plane while it is raining. The beads of water splashing off your plane as you whizz through the stormy skies can make it feel as though you’re on a rescue mission or flying through a battlefield. Whatever your dreams may be, there is one question you have to ask yourself: Can you fly RC planes in the rain?

Can you fly RC planes in the rain? It’s best to avoid water altogether when flying an RC plane. This is due to the fact that the motor or transmitter can short when exposed to water. You also have the dilemma of the lens becoming fogged up, the RC plane corroding, and the simple fact that standing out in the rain can be annoying after just a short time.

While it may sound like a thrilling adventure, radios and electronics don’t mix well with rain. Trying to fly your RC plane while it’s raining outside can have a negative impact on many parts of your plane. The amount of rainfall will have a direct impact on how much damage is done, but that still doesn’t mean you should feel confident even if you are only in a light drizzle.

Here are five reasons you probably shouldn’t fly your RC plane in the rain:

1. The Motor or Transmitter Can Short Out

There is a high chance of the motor or transmitter shorting out because they will most likely be coming into contact with water. Electronics and water don’t pair well, and there is a high risk of something happening to one of these parts when you are having your flying adventure through the mist.

Related Post  How High Can RC Planes and Helicopters Go?

The biggest concern, though, is with the transmitter. This is due to the fact that the motor in your RC plane is likely protected enough to withstand the elements, as long as it’s not pouring outside.

Does that mean you should risk it? Probably not. But if you’re going to test your luck, you need to pay extra close attention to the transmitter because it is normally not well protected and the most likely to get ruined from the water.

2. The Lens May Become Fogged Up

One thing that everyone does while flying their RC plane is to look at what’s being captured on the camera. This can make your flying ultimately more fun, but it also helps you to guide your plane, especially if you can’t see it very well. While the lens is an important and fun part of every plane ride, it can become disastrous if you can’t see because it is fogged up.

If you can’t see out of your lens you will have a more challenging time guiding your RC plane through the rainy sky. If the rain becomes any worse you might end up losing your RC plane altogether because you’re no longer able to see it with your eyes or navigate it through the lens.

3. Your RC Plane May Suffer from Corrosion

By flying your RC plane through the rain, you are risking your plane suffering from corrosion. As the rain continues to beat against your electronic plane, small deposits of minerals from the rain will begin to build up and cause corrosion. This not only makes your RC plane appearance more unpleasant, but it can also have a direct impact on how your RC plane operates.

Should you decide to fly your RC plane in the rain, the best way to avoid this is to spray down your RC plane with an anti-corrosion spray. This will help the plane to better deflect the rainfall and minerals, thus leaving it without the ill effects of the corrosion.

While some of us may like to ‘dance in the rain, I highly doubt it’s high on anyone’s list to stand out in the rain and enjoy a plane ride. The incessant sprinkles hitting against our face as we try to maneuver an RC plane through the sky is enough to make anyone annoyed enough to never want to do it again.

This is even more unpleasant for those who wear glasses. The rain hitting against your glasses will make it a big challenge to see and you will have to worry about clearing them off regularly. There is a high chance of fog building up in your glasses as well, which makes it even more challenging to see what’s going on.

Worrying about your motor or transmitter shorting out and dealing with foggy lenses and potential corrosion are the biggest worries when it comes to flying an RC plane in the rain. But what about the person who is driving the RC plane? Are they affected by the rain?

Yes, it is annoying to try and take your RC plane out in the rain. But aside from it being a downright nuisance, it’s also dangerous. You won’t be able to see your RC plane clearly in the rain, which means you will not be able to control it as well. This could lead to your RC plane running into a tree, someone’s house, or any number of obstacles that could destroy it.

You could also end up getting sick from standing out in the rain and no one wants to have to deal with a cold or other illness because they tried to fly their plane on a rainy day.

Want to see how nasty flying your RC plane in the rain can be? Check it out in the video below.

What About A Drizzle or A Slight Mist?

For the most part, there aren’t many people who want to take their RC plane out during a downpour. This will have a negative impact on the RC vehicle because it simply won’t be able to function properly and will be impeded by the weight of the rain. That may lead some RC plane owners to wonder, what about drizzling or a slight mist?

It’s best to avoid all types of rainfall when flying your RC plane. However, many users have claimed that they have seen no negative impact flying their RC planes through a light rainfall or mist. The problem really occurs when there is a heavy downpour or excessive amounts of fog.

If you are going to risk flying your RC plane in the rain, even if it’s very light, it’s always very important to protect the transmitter. You will want to place the transmitter in a plastic bag, under your jacket, or in some type of protective advice that will keep it from getting wet. The antenna should still be able to stick out, but the transmitter itself should be kept dry at all times.

When it comes to flying your RC plane in the rain, it’s best to avoid it altogether. Rain, even a light drizzle, can short out the motor or transmitter. You also risk fogged up lenses and corrosion, both of which can have a very serious impact on your plane and experience.

Ultimately it is your choice whether flying in the rain is worth the risks but for most people it’s best to keep your plane inside until the skies clear up.