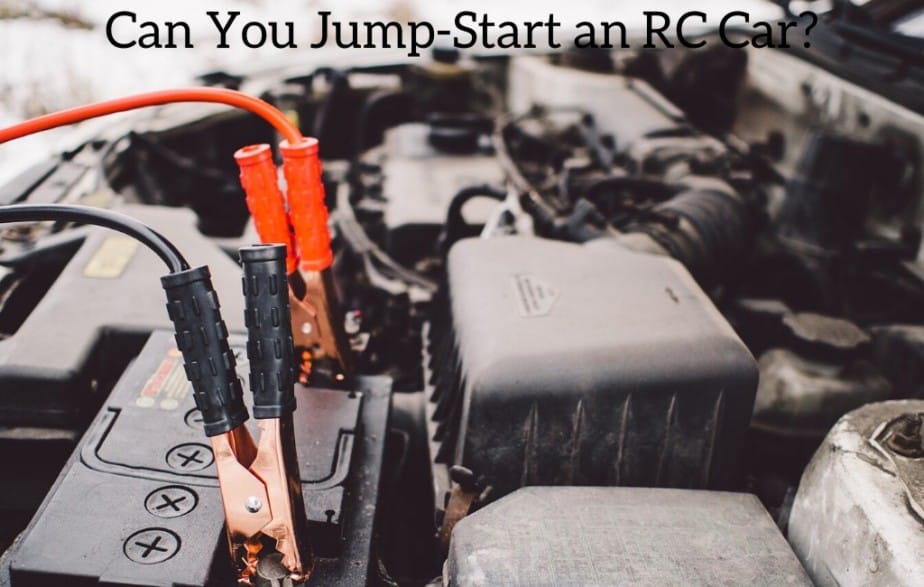 Radio-Controlled (RC) cars are great because you can pretend to dune buggy through the desert or race through the streets. However, RC cars are very precise machines that require knowledge and care if they are going to work right. Above all, you have to keep the battery charged up because when it runs out of juice you are done driving.

Can you jump-start an RC car?  Unfortunately, RC cars don’t have their own power generators, so simply starting the motor and letting the car’s battery charge itself the rest of the way, like a regular car, won’t work. If the battery is dead, your only option is to replace or recharge the battery as you normally would.

If you want to get the best performance from your RC car, it helps to know how they work. An RC car may look a lot like a full-sized car, just smaller, but internally they are very different. This means a jump-start just won’t work. Even if your RC car has a gasoline engine, the electrical system is not the same.

Why Won’t a Jump-Start Work?

You might think that it should be possible to hook up a fully charged battery to a drained battery so that electric power flows from one to the other, leaving you with two half-charged, more-or-less usable batteries.

But charging a battery in this way is very inefficient. A lot of power will be lost between the two batteries. Instead of having one charged battery and one drained battery, you will most likely wind up with two, almost drained, and unusable batteries. And frankly, that just isn’t a whole lot of fun.

The full-sized automobile that you ride around in will have a small electrical generator (your mechanic would call it an alternator) that is turned by the engine. Ordinarily, the alternator will provide electrical power to charge your car’s battery. So, it’s possible for your car to recharge its own battery in this way.

Why You Can’t Start the Engine with a Dead Battery

But when the battery is dead, you have a bit of a chicken-and-egg problem: you can’t start the car with the dead battery, but you can’t recharge the battery without starting the car.

That’s where the jump-start comes in. When you jump-start your friend’s car, you will connect the two batteries, but you will also have your own car’s engine running.

In the case of a full-size car, jump-starting takes more power than a typical car battery can produce on its own. That’s why you usually have the working car running. It’s also why you need special cables to connect the batteries.

Just remember that you need to be careful to avoid short circuits and sparks when you make the connections (You can learn more about how to jump a car battery, and how the jump works, here).

Now, unlike a full-size automobile, your RC car typically does not have an alternator, which means you cannot generate the additional electrical power needed to overcome the resistance of recharging a battery.

What Makes MY RC Car Go?

Most RC cars are totally electrical. An electrical motor will power the wheels and electrical servos connected to your controller by radio will provide the steering and brakes. Some more advanced RC enthusiasts will use cars that have nitromethane (“Nitro” for short) fueled engines, or two-stroke engines (“Gassies”) that run on a gasoline/oil mixture.

These will still have a battery to power the radio, steering, brakes, and throttle. But even the nitro or gassie cars typically will not have the alternator on board that allows them to recharge their own batteries or provide a “jump” for other cars. As a beginning driver, you will almost certainly be driving fully battery powered cars anyway.

Related Post  How To Make A Nitro Engine Quieter

How do I make sure my RC car’s battery is fully charged?

Since it isn’t practical to use a battery to charge another battery, you must have your batteries fully charged when you head out for a day of RC car driving. To make sure you get the most from your batteries, you should pay careful attention to your batteries’ capacity and the capacity of your battery charger.

RC car batteries generally all produce 7.2 volts of current, but their capacities vary. You will want to get familiar with the “mAh” (that stands for milliampere-hours) of your batteries. This tells you how much electrical current a battery can produce and how long it can produce that current.

Be Careful Not to Overcharge

You may want to leave it on a few hours longer, but don’t overdo it. “Overcharging” a battery, or attempting to store more power in a battery than it is rated to handle, will ruin it. Chargers with “peak detection” may cost more, but they will sense when a battery is fully charged and turn off, leaving you with batteries that will give you their best performance.

There are Different Types of Batteries for RC Cars

While batteries are safe to charge and rugged enough to handle whatever your RC car can throw at them, you should use some common sense.

If you want to learn more about how RC car batteries work then there are tons of videos on Youtube that will help you learn more about this fascinating hobby. One popular video is made by Horizon Hobby Products and as of this writing has almost 500,000 views!

Check it out and see if the information helps you too.

What else can I do to keep the fun going?

Replacement batteries for RC cars aren’t costly. A pack of four NiCad replacement batteries can be had for as little as $50. These might not be powerful enough for advanced RC drivers or competitive RC racers, but should be enough to give hobbyists several hours of RC driving enjoyment.

Having a few extra batteries around is a great idea as it will allow you to keep having fun for much longer rather than having to stop as soon as your first battery dies.

You can’t “jump-start” an RC car with a dead battery, but if you learn how to use your batteries properly, and maybe take a spare charged-up battery with you, you shouldn’t need to worry about running out of juice.