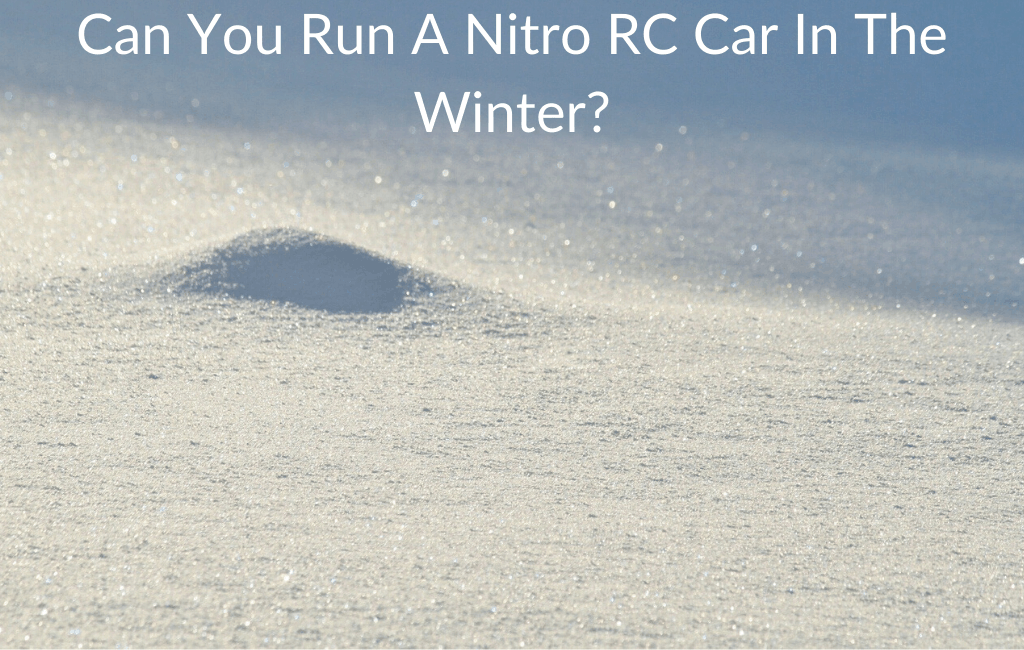 If you have recently purchased a nitro RC car then you may be wondering if you can use it in the winter. Afterall it uses fuel and a much different engine than battery powered RC cars so will a nitro engine work properly in the colder temperatures?

Nitro RC cars can be used in the wintertime but there are additional risks. For example the outer shell gets more brittle in colder temperatures so it is much more likely to break if you jump your car. There are also some important precautions that must be taken when using your RC car in the winter.

Taking precautions and carrying out proper maintenance practices after each use will ensure your RC car stays in perfect condition. In the rest of this article we will be talking about those precautions and other things you should do to use your nitro car in the winter season.

For one specific thing that you should always do in the winter check out this video below.

Racing your nitro RC car in the winter will mostly result in  brittle plastic and rubber parts especially if you are in the parts of the country or world where temperatures get to below freezing.

The reinforced plastic used on most RC cars will likely become brittle in lower temperatures, and depending on how much fiber is used, among other things, the likelihood of this happening is even greater. Using alloy parts instead of plastic during the winter season can help to curb this problem of brittleness. However, keep in mind that alloy may have other cons since they tend to bend rather than break.

In addition, with cold temperatures, oils and grease begin to thicken up. If you notice that the oil in the dampers is getting thick, you might want to use thinner oil until spring.

Related Post  Why Do RC LiPo Batteries Puff Up?

For example, if you successfully used a 40WT oil during warm weather, you should probably use a 20WT oil during the cold weather. You can also change the differential and transmission greases if needed. However, these would normally get thinner after the first few minutes when the nitro engine starts heating up the chassis and the things attached to it.

This also applies to the oils that are part of the model fuel, which will also begin to thicken when close to sub-zero temperatures. Make sure to always store your fuel away from frosty temperatures.

Getting the engine up to temperature is not easy when racing your nitro RC during winter. Purchasing a second-hand heat sink and removing a number of the cooling ribs can help the engine keep its temperature during the coldest months. Also, you can put a ring made of paper towels and duct tape over the heat sink to keep the cold air off. Try to use this ring to adjust the temperature of the engine and don’t lean the fuel mixture too much to keep the engine’s temperature high because this can make the carburetor setting too lean and destroy your engine.

You can definitely run your nitro RC car in the winter but there are many steps that you should take to keep it running at the optimal temperature as well as running properly. You also have to be careful about the plastic becoming more brittle as well as the oil in the car and in the fuel thickening up causing further issues.

Ultimately only you can decide if all of the work is worth using your nitro RC during winter or if it is better to just stick to a battery powered car in winter and break out the nitro model once the coldest temps are over.