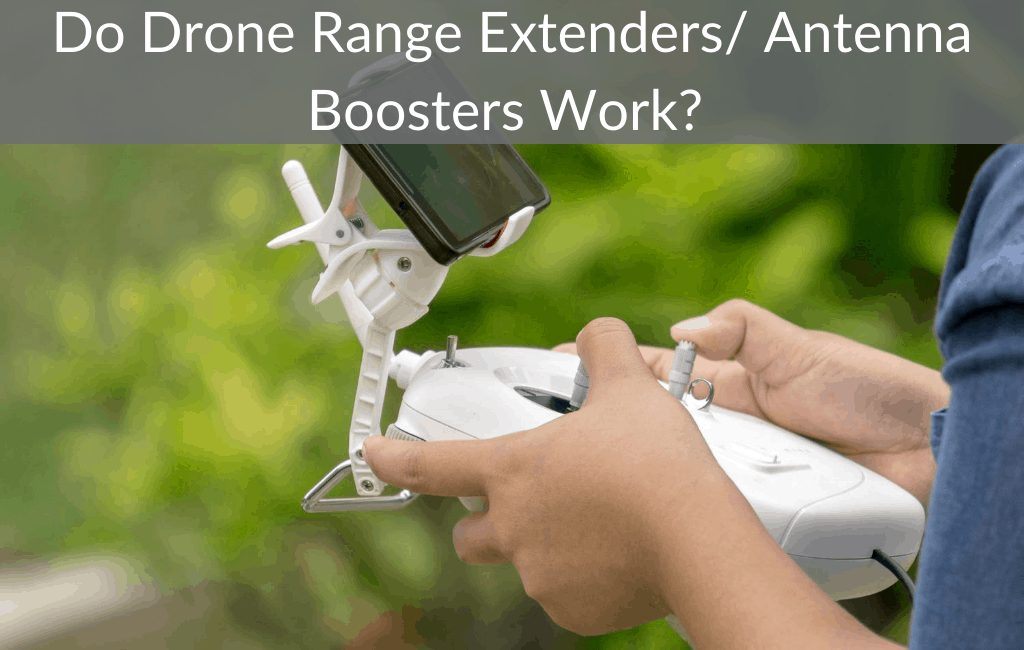 If you have a drone and have been looking for different accessories for your drone you might have come across something called antenna boosters or a range extender that are designed to increase the range of your drone.

Of course when you first see these devices your first question is likely whether they work or not. After all they are quite inexpensive (especially this one) so they can’t really work being so cheap… right?

Drone antenna boosters/range extenders actually will help you increase the range of your drone and allow you to control it from further away. Many users have even reported getting 30-50% more range using these types of devices!

Of course not everyone says that they work good and some people even say aluminum foil works better than some brands (see the video below) but in general the consensus is if you keep your controller pointed towards the drone then a drone antenna booster/range extender will actually work quite well in most cases.

How can I increase the range of my drone?

There are two basic ways that you can increase the range of your drone. Those are by using a signal booster and by using aluminum foil.

Yes, you read that right, using aluminum foil will actually help to increase the range of your drone by a considerable amount! Basically you just make a little “scoop” and insert it down over your antennas to help them pick up the signal from the drone.

That’s the same principle that drone antenna boosters are made on and typically both methods will work well to increase the range of your drone. The aluminum foil method is cheaper (obviously) but it doesn’t look as nice. The antenna boosters are slightly more expensive (but still cheap) but they look far better.

If you want to read some reviews from other real people who have used these antenna boosters to increase their drone’s range you can check them out by clicking here.

If you just got a drone that is 2.4Ghz you will likely want to know how far you can fly it before it crashes or more likely automatically returns to you (since most drones have that feature now). Knowing that distance is important to not only your peace of mind but also in letting you know where you do or don’t have enough range to explore.

Unfortunately the total range that you have on a 2.4Ghz drone will vary a considerable amount based on the obstacles and other interferences with the signal. Most people can expect to get their drone ½ to ¾ of a mile away before they start having signal problems in most areas.

In areas such as parks or the city that distance could come down a bit while a wide open field would allow the drone to be able to get further away without any problem.

If you add drone range extenders or signal boosters you can typically add a good amount to that number but again the distance will vary based on the terrain and obstacles.

Related Post  Can I Fly My Drone Near A Wind Turbine?

If that doesn’t prove that they work I don’t know what does!

If you have a DJI drone then you have likely seen many signal boosters that are designed specifically for use with DJI drones and wondered if they actually work or if they are put out by DJI.

As of right now there are no official signal boosters that are put out by DJI but the ones produced for DJI drones do work quite well from many reports.

Many people have said they were able to substantially increase their DJI drone’s range by using these signal boosters/range extenders for their DJI drone. If you have one of these drones it’s certainly worth the small cost to try it out and see for yourself.

If you want to see which drone signal booster we’ve found with good reviews and a cheap price to go with it you can find it here.

How far can a drone be flown?

Recreational can range in size and price from just a few dollars for cheap mini drones all the way up to several thousand dollars for the best drones available on the market.

Related Post  How Long Does the Mavic Mini Take To Charge?

Obviously the more expensive commercial and military drones will have a much longer range and can be flown further away from the pilot than any recreational drone can.

Recreational drones are typically able to fly ½ to ¾ of a mile away from the pilot before losing signal. If there are no trees or anything else interfering with the signal than a drone could be flown slightly farther than that but not much.

Recently with drone range extenders (talked about earlier) many drone pilots have been able to increase their range by almost an additional ½ mile so if you are in an area with no trees or buildings and add a good signal booster to your drone you should be able to get 1-1 ½ miles away from your drone before losing signal entirely.

The issue with this generalization is that it really is only a generalization. Every recreational  drone on market is different and although the higher priced drones aren’t affordable for everyone they do normally have the longest range when compared to cheaper options.

Another thing to be considered with how far a drone can be flown is battery life. Some cheaper drones might be able to go a long ways without losing signal but if the battery life isn’t long enough it won’t matter!

There are many different things that you can do to try and extend the range on your drone from getting any from obstacles to installing range extenders/signal boosters. For most drones installing signal boosters (or using aluminum foil) will increase the signal distance by several thousand feet over a drone that doesn’t have them.

That is a significant improvement and especially since range extenders are so cheap it is well worth it for many people to at least try it with their drone and in their area.