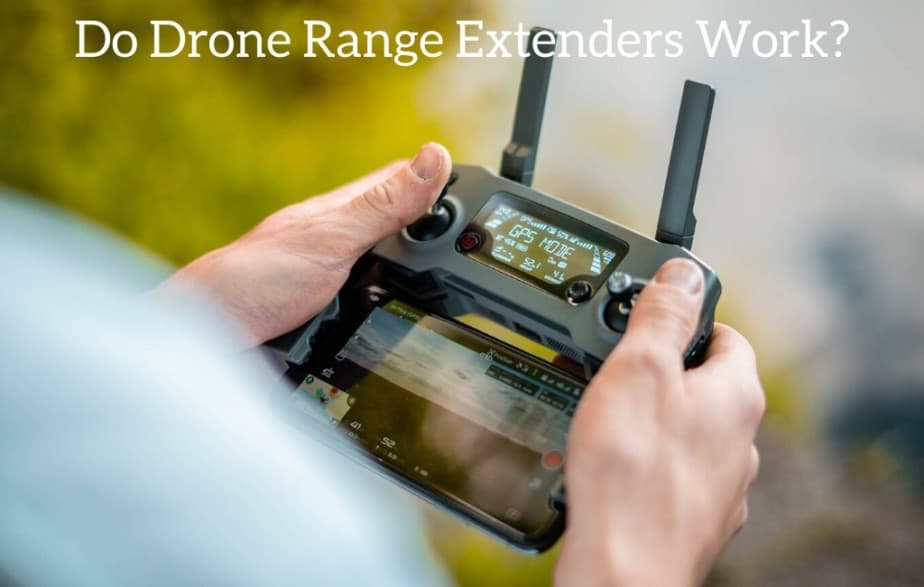 If you have issues with drones always going out of range then you may have heard of a range extender and wondered if they actually work then you are in the right place!

Many people swear by drone range extenders while other people think that they are simply a scam. Hopefully this article will help you make up your mind but ultimately the only way to know if a drone range extender works for you is to test it out for yourself. If it works then great and if not then it is pretty easy to return without much hassle.

Range extenders are relatively inexpensive so testing them out on your drone to see how they work won’t break the bank and as mentioned earlier if it doesn’t work with your drone or because of other reasons then you can certainly return it and get your money back.

Of course just because range extenders work doesn’t mean that you need to buy one. Some people wouldn’t own a drone without a range extenders while other people believe that they are overkill and not necessary. As mentioned above testing one out for yourself is the best way to see if they are worthwhile for your drone or not.

Just because they work doesn’t mean that the difference will be noticeable to your drone flying experience so testing is really the only way to know for sure.

If you want to see someone else test a range extender out on their drone then watch the video below.

Why do people use range extenders?

There is one major reason why people choose to use drone range extenders. The signal’s range!

Suppose your drone is far away or too high and you lose the signal to your drone. What will happen? Maybe your drone will crash or you might end up losing your drone entirely if it doesn’t have some sort of GPS home function that it automatically flies to.

Related Post  How Do You Make Your RC Battery Last Longer?

Certainly losing your drone or it crashing are not good options so range extenders can help you not lose the signal in the first place.

However, there is a bit of controversy on forums and among drone enthusiasts as to how well these range extenders actually work. Afterall, just because they work doesn’t mean that they work as advertised.

Some people who swear by them while others say they even hurt performance. It is actually possible that both people are correct as the improper use of a range extender and not pointing it directly at a drone can certainly hurt the range and not help it. However, if you are using the range extender properly it should increase your range significantly.

Your range is extended, now what?

Let’s assume that you were able to find a range extender that works for your drone, now what? Should you just fly your drone a long way up or away just because you can?

The first thing to consider is what do FAA drone flying rules say? FAA rules tell us that you need to keep a line of sight with your drone at all times or be in direct contact with someone who is able to see your drone.

It is a good idea to check the local weather before flying your drone as low clouds or fog can cause you to lose sight of your drone much faster than you would on a clear day.

This is probably the rule that is broken most often by drone pilots as it is super easy to fly your drone a long ways away and have it be out of your site while you control it with your smartphone.

Just because you can take your drone 5 miles away from yourself doesn’t mean that you should! You certainly wouldn’t be abiding by these rules if you lose sight of your drone.

Another rule to keep in mind is that you have to fly your drone below 400 feet in the USA and a maximum of 500 feet in the European Union. Just because your range extender makes it where you can take your drone miles into the sky does not mean that you should do it!

When you fly your drone too high you are risking hurting planes or other aircraft that are up there and there could be severe consequences if you damage a multi-million dollar aircraft. It is best to just follow the rules and stay below the 400 feet (in the USA).

How can you increase your drone’s range?

Get rid of obstacles

So if you notice that your signal is weaker or getting interrupted quite often then it is a good idea to take your drone to a location with less obstacles that will obstruct the signal.

The orientation of the control and the drone

Type of antenna on the control and the drone

Each antenna has a specific radiation pattern. Some antennas will broadcast equally in all directions while other, highly directional antennas, will only transmit in a narrow cone in front of them.

The more directional an antenna is the higher its gain. Usually, unidirectional antennas have 1-3dB and directional atennas usually 8-15dB. The impact of antenna gain is huge. For example, a 2dB antenna on 2.4 GHz will give you a range of 3-4 miles.

Range is proportional to the square root of the power. This means that doubling your power will only increase your range by around 40%. If your transmitter is underpowered then upgrading it to a more powerful one will increase your range significantly.

Frequency plays a massive role in a drone’s range and this is one of the critical factors. The lower the frequency, the longer the range. As such, if you choose the frequency on your setup be aware that unless you’re in an area of significant interference in the 2.4GHz band, then 5.8GHz will not be your best choice as the 2.4GHz will give you a longer range.

The positioning of the antenna within the drone

Most pilots face signal issues because the drone’s antenna’s radiation pattern is blocked by some of the drone’s circuitry. So a wise solution is to move your antenna that way it is located under the drone. That will ensure a better connection and a longer range.

Reflective obstacles behind and around the controller and drone

Maybe you know about multipath interference. It happens when the signal bounces off obstacles. Multipath is an issue that occurs when the signal reaches the receiver from multiple paths instead of a single one.

Related Post  How Do RC Bikes/Motorcycles Stay Upright And Balanced?

So, it is always a good idea to try to avoid controlling your drone when you are close to large obstacles. Even if those obstacles are behind you and your line of sight to the drone is clear it could still affect your drone’s signal and range.

The rules you need to know when flying a drone

Stay below the maximum allowable altitude

As mentioned earlier  a general rule from the FAA (in the USA) is that you should fly a drone below 400 feet (121 meters) in order to avoid conflict with aircraft like planes and helicopters. This rule can vary from country to country, for example in Canada you can fly drones a maximum of 295 feet (90 meters) high.

If you are flying your drone in a country that you don’t live in then it is a good idea to check the country’s maximum flying limit. It’s your responsibility to make sure that your drone stays within the laws and rules that are in place.

Flying drones over the people is not allowed whether it is a group of people or a single person. Suppose you are on a popular beach and you think you can capture a stunning view with your new drone.

You can’t do it without going to a place where there are no people around.

Always be alert and stay away from crowded places like stadiums, public events, and community events when flying your drone.

Do not fly your drone after dark even if your drone is equipped with lights for nighttime use. Dark is considered 30 minutes before sunrise and 30 minutes after sunset. This is simply a rule that is in place to ensure that people are safe and don’t fly their drones into unsafe areas that they cannot see.

These are the general rules for flying a drone that you must maintain. Always be respectful of local laws and make sure to know what they are when you travel to a different city or country.

Range extenders can be valuable tools to help your drone fly farther and to keep a more consistent signal. However, they do get mixed reviews with some people loving them and others saying they don’t work at all or even hurt their drone’s range.

Ultimately, the only way to know if a drone range extender works for you and your drone is to buy one and test it out. Most of them are quite inexpensive so testing a few different ones won’t break the bank and you can certainly return any that don’t work if you buy from a store with a good return policy.