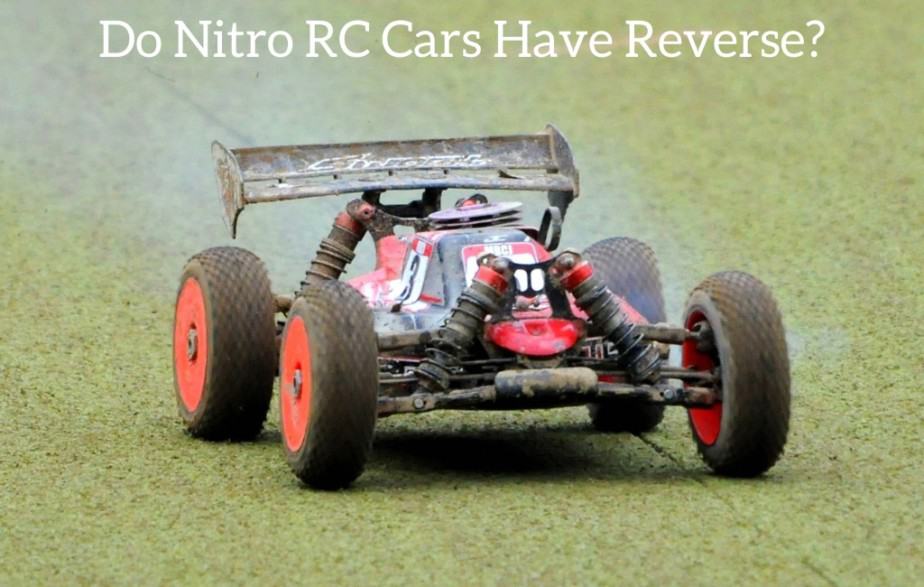 If you are looking to buy a nitro RC car or have recently bought one and are looking for the reverse on your new RC car then you have come to the right place. This article will answer your question about your nitro RC car’s reverse as well as give you additional tips and help with your nitro car.

Do nitro RC cars have reverse? It’s quite rare to find a nitro RC car that comes with reverse. Reverse is one of the main features that you will notice is missing from most nitro RC cars. The reason you barely ever see a nitro RC with reverse is because of the durability issues that can arise with the car having reverse. Generally, on-road nitro RC cars are not made with a reverse feature, but off-road trucks like the Traxxas Revo have optional reverse options.

However, in spite of the absence of reverse, you can still have the best and fun time while using your nitro RC. Since most courses are designed for you to go in a loop then using reverse will often be unnecessary and will allow your nitro car to go faster and break down less.

To see some of the best selling nitro RC models you can click here.

Which nitro RC cars have reverse?

If having a reverse on your nitro RC car is a deal breaker then you will want to check out the models below. Most nitro RC vehicles will not come with reverse on them but some models do. Some of the most popular models that include reverse on them are.

Related Post  The Best RC Cars For Using At A Skatepark

As of now the above are the only nitro models that come with reverse equipped or allow you to add reverse to them.

Many racers are reluctant about using a nitro RC because of the absence of a reverse option, but really, there’s a lot more to a nitro RC than simply going backwards and nitro RCs without reverse will normally last longer than those cars with it.

Here are some things you can do to ensure that your nitro RC ride will be a smooth one.

How to get the best out of your nitro RC

Don’t restrict the wheels: Allow the wheels to spin freely and ensure that the brake is off to avoid overheating and melting the nylon drive gears.

Take off the brake before you start the car: If the car resists when you try pushing it forward, the brake is likely on. Be sure to turn it off before starting the car to avoid the clutch overheating.

If your nitro RC is new here are a few other tips to keep in mind:

Charge the glow igniter: This is the first thing to do as soon as you open up your starter kit. You can’t start the car without it.

Fill the tank: Pour some fuel into the fuel bottle of the starter kit. Fill the fuel tank with nitro, and connect all fuel lines to their ports. Ensure that you are using the right hobby fuel with 20–30% nitro unless the manual states otherwise. Also, never bend the fuel lid too far back to avoid bending the spring in the lid.

Install your air filter: If your nitro engine does not already have the air filter installed, install it onto the carburetor. It may include a zip tie that you can fasten the air filter to the engine with.

Have your antennas all the way up: This is an important part of setting up your nitro RC car. First, insert the wire via the antenna mount of the car, going right through the tube, which will then go into the tube mount. If you have a longer wire, don’t cut the line. Just let it hang freely.

Check for proper operation of servos: When the engine is not running, you should check to see if the throttle, steering, and brake servos are properly functioning using the transmitter and receiver. RC servos serve to ensure actuation for a number of mechanical systems in the car, such as its steering. If you want to test how well the servos are performing, make sure that the wheels of your car are off the ground to allow it spin easily. When you apply the throttle, the carburetor is opened up, and when you apply the brakes, the carb is almost completely closed. And then, the brakes are engaged.

Checking the radio range: Make a habit of always testing your range before you put your car to work. Also, ensure that you are rid of radio interference, especially with the 27Mhz frequency, which power lines or 2-way radios transmitting on an identical frequency can cause.

If you want to carry out a range check, walk 15 yards away from the car with the antenna of the model completely extended and the aerial of the transmitter completely down. Next, turn on the radio system to ensure that all the servos are working as they should. If you notice any radio problems, don’t try to race the car. Also, avoid driving the car if you have any radio interference. In addition, make sure that the batteries are fully charged and strong.

Prime the engine with fuel: This one is a simple procedure. All you need to do is put your finger over the exhaust port and pull the cord a few times until you see that the fuel has gone into the carburetor through the line. As soon as the fuel gets to the carb, stop the process to avoid flooding the engine. When an engine is cold, it will require more priming than when it is hot.

Carrying out the above steps will make your nitro RC ride a whole lot easier in spite of the absence of a reverse.

For further information on how to get your brand new nitro RC car set up check out the video below.

There are only a few nitro RC cars that come with reverse (mentioned earlier) but that is for a good reason. You will rarely need reverse on your nitro RC car and having reverse will normally shorten the lifespan of the motor and could possibly cause other issues as well.

If you absolutely have to have reverse than choosing one of the cars mentioned earlier are really your only options. That is assuming that you decide to stay with nitro models as most electric models will come with reverse on them.

link to Can You Use An RC Car On The Beach?

When playing with your RC car, you have probably realized that your yard is not big enough to race and have fun for a long time. This is because RC cars need open space to race with each other and a...

Continue Reading
link to Are Traxxas Batteries Worth It?

If you have recently purchased a Traxxas RC car you may have noticed that not all of them come with a battery. This allows you to choose the battery that you prefer over being forced to use the one...