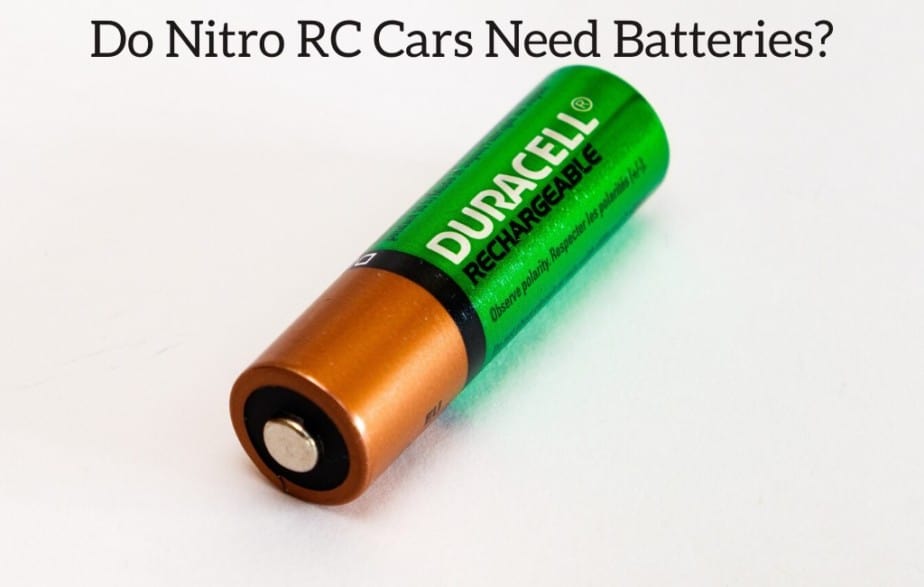 Radio-controlled RC cars have become a popular hobby among many people. A few years ago, there was a tendency to think of an RC car as something for kids, but the reality has changed. More adults are now indulging in collecting these cars and even engaging in various racing competitions.

RC cars are powered by different sources and those sources continually change based on newer technology. One of the best classes of RC cars is the nitro RC cars.

Nitro RC cars are for anyone who loves smoke and noise and they are the closest to a real car that exists in the RC community. A passion for fast cars will definitely be satisfied by a nitro RC car.

If you’re considering buying a Nitro RC car, you need to see the difference with other RC cars on the market.

Battery power on a nitro RC car doesn’t provide the energy to run the motor, but it’s needed to run the servos and receiver.

The receiver pack is designed to hold and accept four AA batteries, or a larger rechargeable battery pack assembled with NiMH or LiPo cells. A rechargeable pack requires a charger but will save you money in the long term as you don’t have to continually buy AA batteries.

If you still are unsure if you want to buy a nitro RC car then you should definitely watch the video below to see some of the pros and cons of each type of RC car.

Nitro RC cars provide pure realistic racing fun. The Nitro fuel is made of methanol, Nitromethane and lubricants. This mixture burns to give the much-needed power for the miniature internal combustion engine.

Related Post  Do Traxxas RC Cars Ever Go On Sale?

Most nitro RC cars are hard to start especially those that need a handheld motor to spin the engine. Some even come with a starter that works like the regular diesel engines.

To start a nitro RC car, there is often a handheld motor that is used to spin the engine, while simultaneously working the remote’s throttle. Newly-made RC cars will often come with a start button on the remote.

The Nitro RC remote turns on the car’s own electric motor that is powered by a lithium-polymer battery pack or some AA batteries. The motor turns a starter shaft behind the engine, which in turn spins the crankshaft until the engine’s suction draws in the nitro fuel allowing it to start.

The battery also lights a glow plug in the engine that works similarly to a spark plug. An RC engine works almost identically to a real car engine where the plug’s hot elements combine with compression of the fuel-air mixture when the piston rises, igniting the fuel.

The initial cost of a Nitro RC is much higher than a battery RC car would be. The amount of money that you will spend increases as you purchase the batteries, replacing fuel, oils, tires, shocks, and the body repair. A non-pill stat engine will even require the additional purchase of a starter box, electric start system and a power source such a charger or battery.

If you’re planning to buy your first nitro RC car, go for a semi ready to run car. This will allow you to get up and running much more quickly as there will be limited things that you have to buy or do before your first run. The initial cost of RTR nitro powered RCs is a bit higher in most cases, but they are much easier for a beginner to learn. It’s okay if you aren’t intimately familiar with how a Nitro engine works as it’s quite easy to get started.

In general, all Nitro RCs need some power to start. These make them ideal for intermediate and advanced users who enjoy overhauling and tweaking the car. Some nitro RC cars come with a pull cord to start the engine while others use a battery or plug in option to start it.

Related Post  Why Does An RC Car Go Faster In Reverse?

Unlike electric motors, nitro engines rely mostly on fuel and batteries come into play during starting or to control the car with your remote. Nitro RC cars have a fuel system that includes a fuel tank and exhaust so they are very similar to real cars.

There are three different ways a nitro RC car can be started. Which is the best? Read along to decide!

This involves a pull similar to a lawn mower or weed whacker. Pulling on the starter handle cranks the engine over causing a spark with the glow plug and the fuel to ignite. The process is tiresome, making the electric-start system easier and a better choice for most people.

The shaft stater uses a handheld starter to crank the engine with the shaft inserted in the back of the engine. You will need an igniter to heat the glow plug as you do with a pull starter.

This method works similar to the full-size car onboard electric starter that includes a gearbox and electric motor attached to the engine to crank it to life. The start battery isn’t connected to the vehicle and it is not used once the engine is running.

An onboard starter adds weight, but is worth it to most people because of the convenience.

Nitro cars are mainly designed to be used for outdoor racing. They are faster and more powerful and that’s what serious hobbyists go for even when the same model electric car might have quicker acceleration or faster top speeds.

The loud sound of a nitro RC car is something that you won’t want to miss. You can truly feel the thrill and excitement with every race as your car speeds up on the track and the engine roars. For some, this sounds like a con, but for many RC enthusiasts, having a small car that sounds and acts like a real one is quite a lot of fun.

The fuel-based power provides a longer run time than a battery powered car would have. Nitro Rc cars can often race for 30 to 45 minutes before the next refill. Unlike electric RC cars, there is no waiting for the battery to recharge and you can use your nitro RC car for hours only having to stop to refuel.

With nitro Rc cars there are some things that you have to consider that you don’t have to worry about with battery powered models.

One of the most attractive things about nitro RC cars is the sound of the engine and the smell coming out of the exhaust as you race. This makes the ride a more realistic experience but not everyone will be happy dealing with your loud RC car and the fumes from your exhaust.

If you are driving your RC car in the park or around people it is a good idea not to hit the gas hard as the loud sounds could startle people or make them upset at you.

Now I know that you are thinking that it isn’t that big of a deal and for many people that might be correct however all it takes is you making the wrong person mad and they might try and get RC cars banned entirely from the park or beach where you enjoy using yours.

It is a good idea to use your nitro RC car in the middle of the day when there are less people around, don’t run for an extended period, and stay away from social gatherings such as picnics, birthday parties, etc.

If possible it is a good idea to use a designated racing area to avoid affecting other people’s lives as much as possible. Even though we have as much right as anyone to be someplace RC cars seem to be an easy target for some people and they might be able to get them banned from a park entirely so being considerate of other people is a good way to ensure that you can use your RC car for a long time to come.

Nitro RC cars do require the use of batteries. Normally these batteries will be AAs or even be a rechargeable battery pack. These batteries aren’t used for powering the motor so they will normally last a long time before needing replaced or charged.

Nitro RC cars can race much longer than their battery powered counterparts since they only need a quick refuel before being able to be used again while battery powered RC cars will need the batteries charged.

Whether you prefer nitro or battery powered cars we can all agree that having fun with RC cars is a great way to spend an afternoon or weekend!