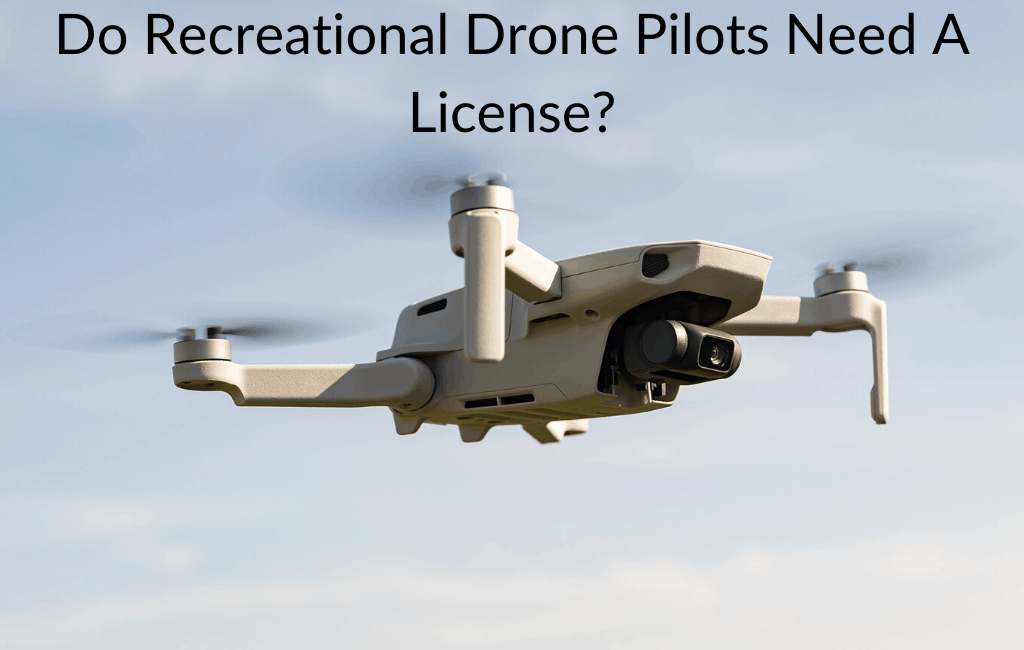 The drone industry has increased in popularity significantly in the past decade. There are thousands of new models that have been launched over the years with different features that are constantly getting better. That has caused many more people to take up the hobby of flying drones than what used to.

Flying a drone is a fun and entertaining activity for anybody interested in aviation and content creation, although they can be used for different commercial purposes as well.

Since there are so many more people using drones recreationally now the FAA (in the United States) has made some specific rules for people who fly a drone recreationally (for fun) and those who use it commercially (for business). These rules are important for you to understand so you can make sure to know whether you need a license as a recreational drone pilot or not.

The rules vary from country to country but in the United States recreational drone pilots do not have to get a license to pilot a drone. Each drone over 250kg does need to be registered but the pilot does not need a license to fly it.

Even though you may have recorded the video when you were just “having fun” now that you are making money with the footage captured with your drone it might now be considered commercial drone flying and you would then need a license.

As you can see what might be considered recreational at the time could then change to being commercial and require a license quite quickly.

Since drones are in such high demand these days, with an increasing number of people and industrie, some legal aspects need to be discussed and clarified.

In this article, we will talk about the issue of needing a license in different situations for flying a drone.

You can check out the video below for some of the relevant information from the FAA.

Do I need a license to fly a drone?

The answer to the question is not a simple “yes” or “no” because there are a lot of aspects to look at to be able to give a correct answer. Aspects like the location you want to fly the drone at, or the purpose of flying the aircraft all come into play when deciding whether a drone license is needed.

The Federal Aviation Administration (FAA) offers clear guidelines about flying your drone recreationally. All drones need to be registered with the FAA if you are flying outdoors.

According to the FAA’s website, these are 5 cases when you don’t need a license to fly your drone outdoors:

So, in a few words, if you just purchased a drone for recreational purposes, and would like to fly it in the park or a field, you can do that without having a license but you still need to take into account a few rules for safe flying.

When do I need a license to fly my drone?

If you only use your drone for recreational, hobby purposes, you do not need a license, but if you plan to operate your drone for a business or intend to make money selling the footage then you need to apply for a license.

According to the FAA’s website, here are the steps that you need to follow to get a license for a commercial drone:

How much does it cost to obtain a commercial drone license?

The Aeronautical Knowledge Testing fee is $150. You can pay that fee at any registered Knowledge Center when scheduling your test.

Also, there is a $5 registration fee for your drone, but this is necessary for any drone that is over 250kg whether used for recreational or commercial purposes.

In conclusion, it costs under $200 to get a Commercial Drone License. However, if you plan to start a business, it’s wise to take into consideration other costs as well, depending on the business you are starting. For example, paying for insurance if you accidentally crash into someone or something might be a good idea. You might also want to establish a limited liability company, which can cost between $150-$200.

As mentioned above in the article, you do not need a license for recreational purposes, so if you purchased a drone strictly for hobby and entertainment, or to use it indoors, you don’t have to obtain a license.

However, you will most likely have to register your drone with the FAA assuming that it is very large at all. DJI has made a drone that is specifically designed so you don’t have to register it since it falls below the minimum weight threshold.

That drone is the DJI Mavic Mini and it can be found here.

Drones are fun to use, and there are a lot of ways to entertain yourself with them, but always make sure you follow the rules and keep everyone safe, including yourself.