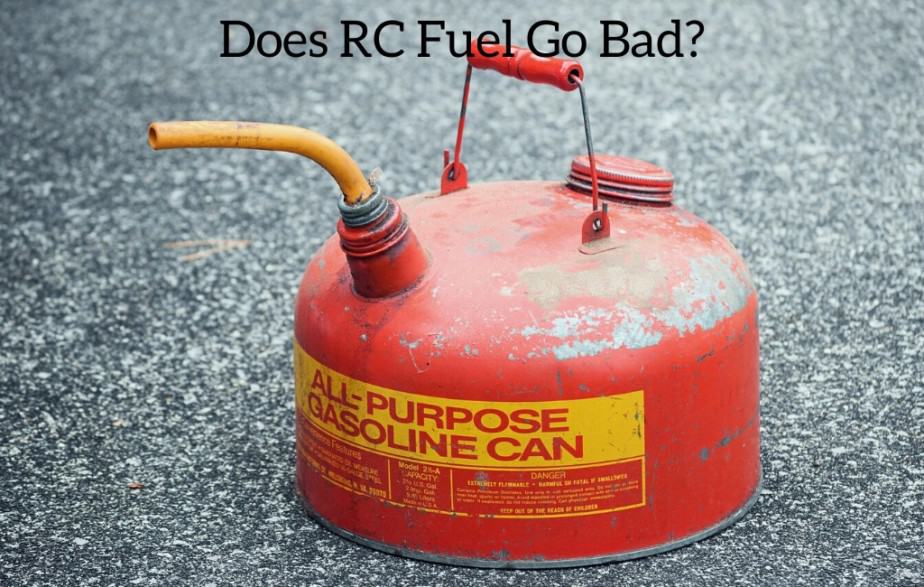 If you have recently bought an RC car or plane that takes nitro fuel then you may be wondering if the fuel goes bad. Well if that is you then you are in the right place as that is what this article is all about.

No fuel lasts forever and nitro fuel for your RC car or plane is no different. It will eventually go bad just like any fuel that you have for your vehicle, lawn mower, weed whacker, etc. Whether that fuel is sitting in a can or in your RC vehicle it will still go bad either way and once the fuel has gone bad it won’t allow your car to work properly.

There are a variety of RC cars and plane engines that work using nitro fuel. Nitro fuel is technically a methanol-based fuel combined with nitromethane and oil. The fuel contains about 20% of nitromethane, but sometimes it could be around 10% to 40%. For lubrication and cooling, castor oil or synthetic oil is also added.

What Can Cause RC Fuel to Go Bad

It’s necessary to store your RC fuel in the proper place and in the right conditions to get it to last as long as possible. The manufacturer’s instructions are really crucial and will determine the best way for storage. RC fuel, though it is capable of a long life span, can go bad just sitting in its can after some time.

One of the most common reasons it goes bad  is moisture contamination. Methanol can easily absorb moisture molecules from the atmosphere, and if they do get into the fuel, then it’ll certainly not work properly. When you begin to find droplets of condensation either inside of the fuel bottle or on the underside of the lid, then the fuel has gone bad. At this point it is time to get the fuel replaced.

Related Post  How Do You Make Your RC Battery Last Longer?

Not paying attention to the manufacturer’s instructions about storage can increase the possibility that your fuel will go bad prematurely. Keep it in its proper container with the lid screwed tightly on, at room temperature and well away from any sources of ignition are some important tips for nitro storage.

Another indicator of nitro fuel gone bad is its appearance. Typically, nitro fuel is clear. If this is the case with your nitro fuel, then your fuel is most likely good to go. However, if the nitro fuel looks cloudy, then that might mean that the fuel is unusable.

Another way to know if the fuel went bad is if the nitro fuel’s color has changed. This generally happens when you leave it in direct sunlight for an extended period of time. If you remember how colorful the fuel was when you originally bought it, contrast it to its color right now. Has the color changed in any way? If it did, then the fuel might have suffered some degradation, which might be slight or severe, depending on how long the bottle has been exposed to the sun.

On account of how RC fuel burns, it always leaves oily residue in the exhaust smoke. When this builds up on the surface of the car or plane over a day’s use it should be cleaned with a fuel cleaner before its taking home.

Generally, the less colorful the fuel, the more it has degraded. Now, this doesn’t mean that you can’t use it at all, but the fuel might not generate as much energy as before. If the fuel has degraded a lot, the fuel’s color could have even turned black!

What To Do If Fuel Goes Bad

When you are certain that your fuel has gone bad, you can still save some of it if you do the following:

If your fuel is not able to ignite by itself if you mix it with a new bottle of fuel, the chances are that it will work. The new fuel is the trick; you don’t have to get a sizable quantity as just a quart will do. The performance might not be top-notched, but it would still do the job.

If you are looking to have the best possible performance than mixing old fuel in with new fuel is not a good option.

This is applicable if the fuel has a black color, then it is degraded. Here, add methane and nitromethane. This black color becomes concentrated oil that accumulates due to the evaporation of certain components in the mix. If the black mix is not too sticky or too thick, then you can simply re-add the ingredients that have evaporated, namely nitromethane and methane.

You can add only nitro when the color of the fuel has gone a bit off but is still clear. A little bit of discoloration suggests that the fuel mix has lost some nitromethane. You can solve this by adding pure nitromethane and mix it with the existing fuel mix. This will make sure that the fuel gets back to the correct mix that it should be at.

How to Avoid RC Fuel from Going Bad

More often than not, fuel goes bad as a result of improper storage, especially when it is stored for a long time.  So if you are thinking of storing away nitro fuel for a longer time, you will need to heed these recommendations so that you don’t lose your fuel to degradation. Most of the time if you are planning on storing your fuel for more than a few months then it is better to simply use it all and start fresh when you are ready to race again.

Get a thick metal container for your nitro fuel storage. This is the probably the most important recommendation. There are a number of reasons for this. First is that a thick metal container will protect the liquid against the sun’s UV rays, which contributes to nitro fuel degradation. The second one is that when compared to plastic bottles, metal ones do not let as much moisture pass through. Water is another factor that contributes to fuel degradation, and metal does a good job of keeping that out. Third is that metal is obviously much more resistant to impacts and punctures when compared to plastic, which can easily break with even the smallest of impacts so your fuel will be much less likely to leak out.

Don’t Expose the Container to Heat

Keep the container away from hot temperatures at all costs, as this is also one of the main causes of degradation in nitro fuel. Always make sure the container rests in a cool, dry, and dark place. While it’s fine at room temperature, the colder temperature will be just fine too. Sunlight is not good for fuel so that is why a dark place is best.

Finally, make sure that in the container, there is no air at all. The degradation of fuel is greatly affected by air, especially when the oil is exposed to air for a long time. So, do a thorough check of the container to be sure there is no opening.

For additional tips for how to properly store nitro fuel you will want to check out the video below.

Even with all of the above precautions your fuel will still go bad over time. If you have ever left some gas in a lawn mower over the wintertime and the mower was virtually impossible to start in the spring then you have experienced the effects of bad gas.

If you are not planning on using your nitro car or plane for an extended time you will certainly want to empty the gas and then run the vehicle until it dies to ensure that no fuel remains in the tank or in the fuel lines. This will ensure a much easier time starting the vehicle the next time you go to use it.

It is also a good idea to try and plan ahead and use all the nitro fuel up that you have so that way it doesn’t sit around all winter not being used and then be wasted in the spring.