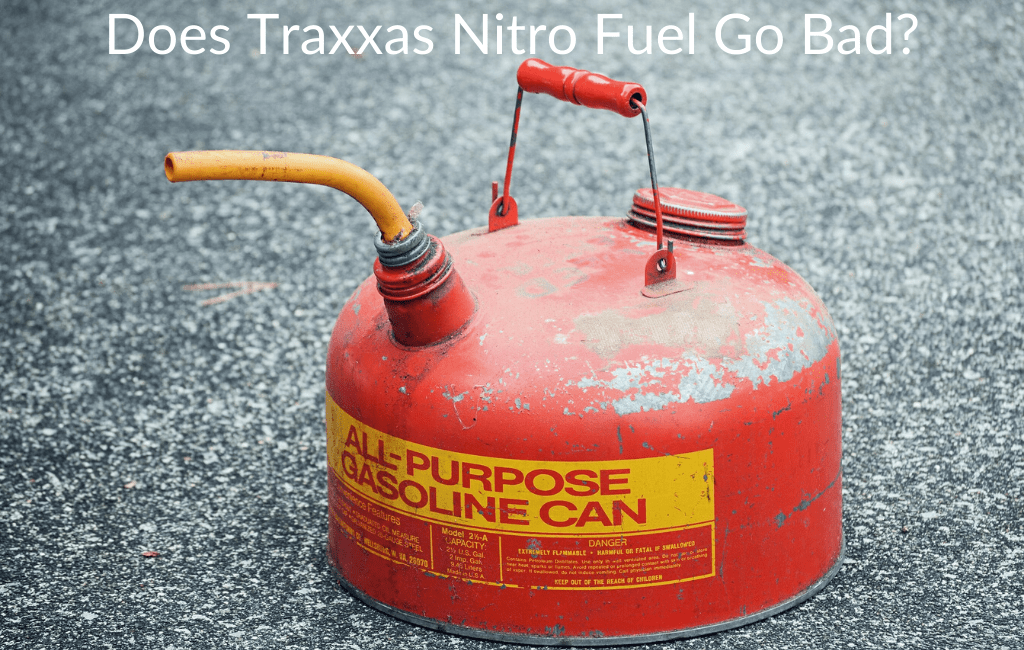 If you have a Traxxas RC car or simply have some Traxxas Nitro fuel then you may be wondering whether it can go bad. Certainly the last thing that you want to do is put some bad fuel into your nitro RC car and damage it or cause yourself tons of additional work.

Whether Traxxas nitro RC fuel goes bad is certainly an important question to know the answer to and we will try to answer it in this article.

Traxxas nitro fuel can go bad but how long it takes before it goes bad depends on a variety of factors including where you store it, the container it is stored in, and more. Nitro fuel that is stored properly can last many years and even decades but if you store it in the hot sun and not in an airtight container it might last months instead of decades.

As you can tell the answer to this question is far from a simple yes or no since so many variables are involved. Where and how the fuel is stored are the most important things to take care of since if those are done right the fuel will last a very long time.

Personally I prefer to use the fuel as quickly as possible and the best suggestion I can give you  is to buy around the exact amount that you need because storing it improperly can be bad for the fuel. If you never have an extra fuel left over then you never have to worry about it going bad!

If however, you find a great deal on the fuel or simply have a little extra fuel that you have to store then there are some important things to know about storing nitro fuel that we will go into next.

For some additional information about nitro fuel and how it works with your nitro RC car you can check out the video below.

How to properly store nitro fuel

Many people have reported that they have used nitro fuel that is years or decades old without any serious issues, but that is only because they were sure to store it properly. If you want your Traxxas fuel to not go bad and still be good years from now then storing it correctly is vitally important.

You should store your fuel in a cool, dark place. It is better if your nitro fuel is stored when the bottle is mostly full as this prevents excess moisture from going from the air in the bottle into the fuel each time you open the bottle up. Constant heat is one of the main reasons for degradation in nitro fuel. So if you store it in a cool place it will prevent this from happening.

Never expose your fuel to heat, sparks or static electricity. Do not store your Traxxas nitro fuel on concrete either because the moisture from concrete long term can allow moisture to get into the bottles.

Never leave your fuel in direct sunlight. It can degrade your fuel and sometimes the amount of nitromethane can decrease as well. Degraded fuel can’t generate a maximum amount of power so you will not gain maximum speed or run time with fuel that has been left in the sunshine.

Store it in a metal container

Another top priority is using a metallic bottle or container in general to store the nitro fuel. The first important thing to know is metal containers can protect your fuel from UV rays of the sun. Another thing is plastic bottles can’t protect your fuel from moisture. Compared to plastic bottles, metal containers are quite good. Another reason why metal works better for storage is that they are simply stronger than their plastic counterpart.

Avoid Air as much as possible

Air is also one of the major factors that contributes to fuel degradation so try to make sure your container is filled up to the top and is always sealed as tightly as possible. The tighter the seal the less likely you will be to let air in which in turn will keep the fuel from drawing moisture.

These are all important steps to make sure your Traxxas nitro fuel doesn’t go bad for many years to come. In the next section we will discuss how you can know if your fuel has actually gone bad.

How do you know if your fuel has gone bad?

Typically nitro fuel is clear and if you find your fuel is still  clear then the fuel is most likely good to go. If somehow you find your nitro fuel cloudy then there is a chance it has gone bad. To make sure if your fuel is still good you need to warm the cloudy fuel to a temperature over 25 degrees Celsius (77 degrees Fahrenheit). If the cloudiness goes away then your fuel is good to use but if you see the cloudiness is still present after it has been warmed up then the fuel is most likely unusable.

This is not the only way to check your fuel, there is another way that you can use if your house isn’t warm enough to get the fuel to a high enough temperature. If your fuel has gone bad then its color will change. Sometimes it can happen generally when you leave it in direct sunlight for a couple of hours or more and other times it takes longer.

Related Post  Why Are Traxxas Batteries So Expensive? (Pros & Cons)

Generally the less colorful the fuel is the more it has degraded. In this case, you have to remember the color it was when you originally brought it. If your fuel color is not as bright as when you bought it that doesn’t always mean you can’t use it. Of course, you can still use it but it won’t generate as much energy as it did before. The fuel color can turn black if it has degraded a lot so if your fuel has gotten to that point then you shouldn’t even try using it.

Another important thing to check is if the bottle has less fuel than before it was stored. If the fuel container was left in direct sunlight then it may happen.

What to do if your fuel goes bad?

We have already covered how you can know if your fuel has gone bad and how you should store your fuel to make it last as long as possible, but if your nitro fuel goes bad  then what can you do?

Well, there are some ways to make it usable again but these methods can’t provide you with 100% original fuel like what you bought from the store. You might not get the maximum run time or speed but you can still use the fuel if you have to.

Next we will discuss some of the other things you can do to make the fuel usable again.

Mix the old and new fuel

The reason you are doing this with only a small amount is the performance might suffer a little bit depending on the mixture. So if the performance is really bad with a half and half mixture then you might have to go with 60/40 or 70/30.

This method can be a little difficult to get right but it is by far the easiest way to use your fuel.

If your fuel has degraded a lot then it will turn black in color. If this happens then you need to add Nitromethane and Methane. As long as the original niro fuel mixture isn’t too gooey or viscous then you can simply add more of the ingredients to make the fuel mixture work properly again.

Related Post  This Is How RC Car Tires Are Measured

If your fuel has only lost a little bit of color but it is still mostly clear then adding nitro can help you to reuse the fuel. As we know the fuel should be clear so if your fuel has lost its color then just add pure nitromethane. You can buy it from a nearby hobby store or even online at places like Amazon (by clicking here)

So i saved the obvious one for last but sometimes it simply isn’t worth saving the fuel if it is too far gone. Discarding the fuel should be done properly and it shouldn’t just be thrown into your normal trash bin. If you contact your local RC car hobby shop they should be able to tell you how to properly dispose of the bad fuel in your area.

There are two different types of RC cars that are currently available on the market. These two main RC cars are electric and nitro cars. Nitro RC cars are actually run by using real fuel which is of course the nitro fuel we have been discussing in this article. Nitro fuel has between 10% to 40% nitromethane but then the question is which nitro fuel percentage is best for RC cars?

The simple answer is that the best nitro fuel percentage is between 15% and 25% but it may change depending on your specific car model. Different car models need different mixtures of the  nitro fuel. For example a 1/5 scale RC car with a bigger engine will generally need a 25% or more mixture to run properly. You should check out the owner’s manual of the RC car that you have to see what specific mixture it needs to operate the best.

All nitro fuel is not created equal. The main difference is the nitromethane percentage that it consists of. The more nitromethane in the fuel mixture, the more powerful the fuel is. You want the fuel to be as powerful as possible but also not have it be too powerful. If the fuel is too powerful for your RC car then you can damage the engine so having the right mixture will give your RC vehicle the maximum performance without damaging it.

This is why the percentages of nitromethane in the fuel mixture are very important.

Over time Traxxas nitro fuel will go bad but the amount of time that it will last varies a lot based on whether you store it properly or not. Properly stored nitro fuel can last many years and even decades while fuel that is stored improperly will only last you a few months.

If you follow the proper storage techniques mentioned in this article then your Traxxas fuel mixture will still be good to use many years from now.