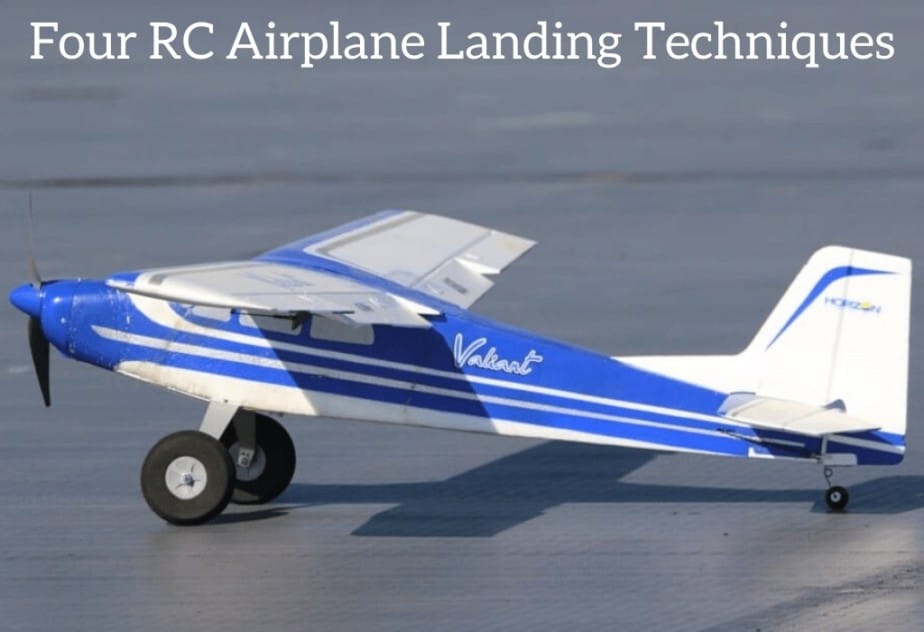 There is an old saying among pilots: “Taking off is optional, but landing is mandatory.” Without a proper landing, the RC airplane’s maiden voyage on the summer breeze could be its last. Unfortunately, for both real-life and RC pilots, the landing is one of the most difficult maneuvers to perform with an aircraft, and it requires extensive training to master the perfect touchdown.

What are four landing techniques for an RC airplane? The perfect RC airplane landing can be attained by using the following step-by-step guide of essential techniques:

While more advanced RC pilots can add additional acrobatics and personal touches to their landings to create a “wow” factor at touchdown, the four techniques listed above first need to be perfected before adding any advanced maneuvers to ensure the safety and longevity of the aircraft.

While the list of RC airplane landing techniques may be able to be subdivided into countless categories, there are four overarching techniques that need to be mastered by any competent pilot.

By pinpointing the plane’s slowest speed, the RC pilot will ensure that his or her craft descends with a predictable sink rate and does not come into contact with the ground with excessive force capable of damaging the airplane.

There are a variety of steps that need to be taken in order for the pilot to accurately and consistently attain the slowest speed for landing.

Figuring out how to attain the slowest speed is essential in landing an RC airplane correctly. Many novice pilots do not understand how to use the throttle and elevators correctly, resulting in crash landings.

The Importance of the Throttle

The throttle (motor power) not only controls the forward velocity of the aircraft but also the rise and descent of the plane because varying amounts of lift will be generated at different propeller speeds. In fact, closing the throttle (reducing motor speed) will actually cause the plane to sink before slowing down.

Inexperienced pilots do not understand this concept and ignore the throttle to focus on the elevators at landing. The elevators do play an essential role in landing technique, but they are often misused.

While a down-elevator will make the plane descend, it will create a dangerous, nosedive landing scenario. Many novice pilots will simply try to land the plane by employing down-elevator, which is not correct.

However, too much up-elevator will reduce airspeed to the point that the airplane actually stalls in air. A stalled airplane is at risk of having a wing dip, which could lead to a freefall. Therefore, only a small amount of up-elevator should be employed, meaning that the plane’s nose will be angled slightly upward to attain the slowest speed for landing.

To correctly land an RC airplane, the pilot needs extensive practice in identifying the craft’s slowest speed, which will be the point just before the airplane stalls. This speed can be attained by trimming the plane’s weight before takeoff, closing the throttle to reduce propeller speed and induce descent, and utilizing the up-elevator to further reduce airspeed and attain ideal fuselage angle for touchdown.

After the pilot has become a pro at getting his or her plane to sink predictably at safe altitude levels, it is time to take the aircraft higher and practice landing from more realistic flight altitudes.

A perfect landing starts with a strong landing pattern, and the RC pilot should employ the same techniques in tracing his or her landing pattern as those used in full-size aircraft.

The landing pattern will trace a rectangular shape in the air and can be broken down into the following steps. A 90-degree turn should be made between each step.

There are some additional considerations for the RC pilot to think about as he or she sets up the landing pattern.

Related Post  Are Drones Noisy? Plus See The 3 Quietest Drones In Action!

The throttle and elevator techniques used in attaining slowest speed become critical when executing the landing pattern. Without being skilled in these areas, it will be difficult for the pilot to perform the many steps necessary in tracing an ideal landing pattern and preparing the craft for touchdown.

If the pilot experiences any problems or difficulties during any leg of the landing pattern, it is best to abort the current attempt and start a fresh run.

After final descent has been achieved in the landing pattern, the aircraft wings are level, and the plane has entered the runway properly centered at the appropriate altitude, it is time for the pilot to execute the flare, one of the most difficult maneuvers to perform with an airplane.

The flare is so difficult because it requires precise timing. If done incorrectly at the wrong moment, a poorly executed flare will cause the plane to bounce back into the air. The exact moment to execute the flare depends on the type of aircraft being flown, but it will generally be attempted within a few feet of the ground.

The flare requires the pilot to perform a couple of precise movements at one time:

The consequences of performing the flare at the wrong time can be disastrous.

If the pilot finds him or herself in the undesirable situation of having an airplane bounce off the runway, it is best to try and quickly add motor power and attain flight status and circle the aircraft through a new landing pattern for another attempt at landing.

Technology has improved society and made life easier for citizens in a multitude of ways. Fortunately for RC airplane pilots, technology can also help them through the complex process of landing their aircraft. However, it is important to understand the technology and the ways it can be used to perform landing functions.

There are times when the RC pilot can perform the four essential landing techniques to perfection, but Mother Nature has other ideas and wants to thwart the perfect landing. Try as the pilot might, he or she cannot seem to enter the final approach upwind, the gusty conditions creating a constant state of unpredictable crosswinds.

When there are strong crosswinds, the pilot will need to use the rudder to point the nose of the craft (heading direction) toward the wind while the body of the plane moves toward the runway (tracking direction). The strength and direction of the crosswind will determine the crabbing angle that the pilot needs to employ to keep the plane tracking straight down the center of the landing strip.

Strong, gusting crosswinds will affect all aspects of the lending process:

However, the presence of crosswinds becomes critical during the final approach of the landing pattern and transitioning into the flare. Crosswinds can blow the aircraft off-center of the runway, inhibit the ideal approach elevation, influence the timing of the ideal stall, and erratically tilt the wings.

Therefore, the need for an ideal approach becomes exacerbated in crosswind situations. If a strong, rectangular approach has not been achieved, the pilot should give it another try before attempting to land the craft using the crabbing technique.

As crabbing is an advanced landing technique used only in especially treacherous wind conditions, it is advisable that the RC pilot gains extensive experience before attempting to land his or her craft in strong winds.

The more experience the pilot has in operating the throttle (motor power), elevators, ailerons, and rudder in a variety of conditions, the more likely that a successful crosswind landing can be executed.

If you are a beginner watching how to best land your plane is a great way to start. The video below is designed specifically for beginners to help you land your plane properly.

There are a variety of different ways to land your plane but landing it without damaging it is incredibly difficult and requires a lot of practice. If you are newer to having an RC plane or don’t have much practice landing one it is a good idea to get someone to watch your landings and help guide you through them a few times until you are confident enough to land by yourself.