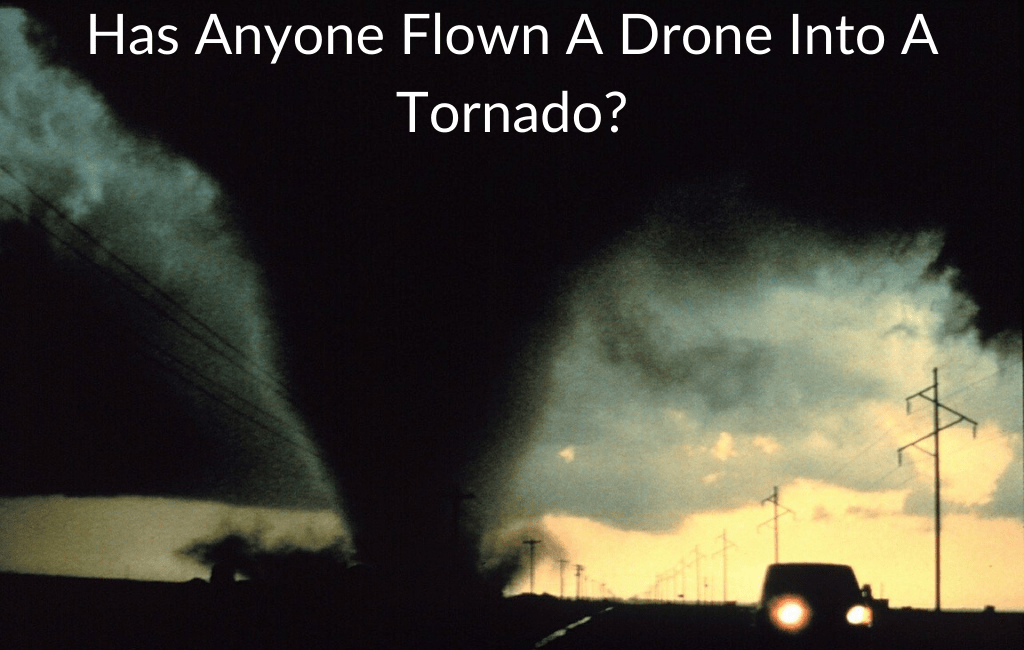 Footages of natural disasters remain quite scarce as often people don’t want to ruin their drones that cost thousands of dollars flying them near or into a storm. Most recreation drones that are on the market today are also not waterproof so flying them during a storm will likely damage or destroy them over if the wind from the tornado doesn’t.

Of course many people have been able to capture footage of a tornado using drones from a distance and some of them have even gotten quite close but has anyone ever flown a drone into a tornado?

Although drones have gotten quite close to tornados there as of now no one has actually flown a drone into one. The reason why is simply because drones can’t go fast enough. An F0 tornado goes 40-72MPH while most drones have a top speed of much below that.

Since tornadoes move much faster than drones (even the weakest ones) then a drone cannot catch up to it from behind. Conceivably a drone could get into the path of the storm and be launched while inside but doing so would require precision predicting that quite simply no one is capable of.

Tornados are honestly quite random. I’ve seen them heading straight for a town and then “jump” up into the air for a few miles before touching back down. I’ve seen them quite literally turn and head in a different direction. It is this unpredictability that makes them so deadly but also that makes it incredibly difficult to actually get inside the tornado with a drone.

In the future as drone technology continues to advance and the speed of drones continues to increase it certainly is possible that a drone could fly inside a tornado but even if it was able to it is likely that as soon it got inside the tornado it would become uncontrollable and would likely crash almost immediately.

If you want to see the difficulty that a storm chaser had trying to get his drone inside an actual tornado you can check out the video below. It is around the 8-9minute mark where he is trying to actually fly into the funnel.

In the rest of this article we will go a little bit more into how tornadoes are studied as well as some of the main reasons why drones have not been able to fly into a tornado… yet.

How are tornadoes studied?

Available data on tornadoes is very scarce and knowing exactly when or where one will hit is honestly a guess as meteorologists cannot accurately predict the occurrence of one only whether the conditions are right for one to happen. The main challenge with tornados is the data collection. One way scientists study twisters is through observation, which is quite unreliable. Doppler radars on trucks can also provide some information on tornadoes. With lower rates of success, probes have been used to study these storms by introducing them into the predicted tornado pathways so that they get hit. Use of drones appears to be a promising method of studying these calamities further, but the question remains:

Can I fly a drone into a tornado?

It would be a stupid idea to fly a drone of any size into a twister. The aviation rule of the thumb states, you can only fly in the wind whose speed is 2/3 of the aircraft’s maximum velocity. Tornadoes can reach speeds of 300mph, and in such a case, it is impossible to take your drone into one.

Related Post  RC Plane Going Backward? Here’s What To Do.

However, there are some low-speed storms in which you could possibly fly large and powerful drones with speeds of 100+ mph into the storm. Success with this experiment requires good knowledge of the twister inflows and outflows which makes flying a drone into a tornado even less likely. Some other hurdles that you might have to face can be locating the storm, being well-positioned, and having all the necessary equipment with you to try and get ahead of it or catch it from behind.

If you choose to try and fly into a tornado, do not expect the aircraft to survive and you should activate the GPS mode so that you can collect what might remain after the storm subsides.

Who has ever flown a drone in a tornado?

There are numerous undocumented cases of attempts to operate drones near twisters but as of now there has not been any recorded cases of a drone actually being able to fly into one. The high winds surrounding tornadoes as well as the battery life on a drone quickly dying makes getting a drone to fly into an actual funnel incredibly difficult.

It is likely that as more and more people get drones and the technology continues to advance that eventually someone will be able to have a drone that can fly fast enough and has the battery life to make it into a tornado but such a drone doesn’t exist yet. Right now it is all about luck of being close enough to the tornado and getting the drone in its path since most drones are unable to catch it from behind.

New developments are coming up in the meteorological field in a bid to demystify tornadoes. In the United States, a multi-million dollar project known as Targeted Observation by Radars and Unmanned aircraft systems of Supercells (TORUS) has been launched to gather the much-needed data on thunderstorms and the tornadoes that they produce. This will employ flight of at least four drones, as opposed to single drones that have been used previously.

Related Post  How Long Does It Take To Charge An RC LiPo Battery?

Researchers working on the Siren Project are also designing drones that will fly at speeds of 100mph to attempt to fly into one corner of the twister and get sucked in. Even these complex drones are not meant to withstand the conditions of the windstorm, which are incredibly fierce. Nevertheless, the data collection devices fitted on them will survive the weather extremes and are collected once the storm ends.

Why you should not fly your drone into a tornado

Enjoying and capturing natural moments can be amazing. Out of curiosity, you may choose to try and fly your drone near twister to get the experience. This is highly discouraged because:

Drone flight is affected by various weather conditions and extremes such as tornadoes are incredibly difficult to get close to with a drone because of their high wind speeds. Generally, flying a drone in storms is not a good idea except for when done by qualified meteorologists.

Some amatuer drone pilots have recorded some amazing footage of them flying their drones near tornadoes and even following them but as of yet no one has been able to fly their drone inside of one.