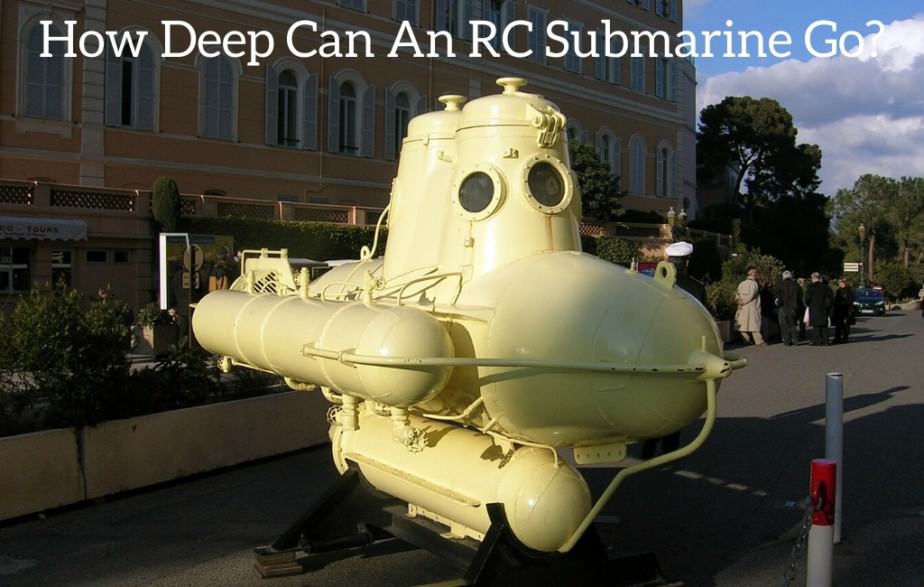 Radio-controlled toys have given many people plenty of fun in the air, on land and on the sea. Now you can take this fantastic hobby beneath the waves with an incredible range of RC submarines. There is no need to jump in at the deep end if you’re a novice either. Your first remote control sub can be an inexpensive toy that you can captain inside a pool or large bathtub if you so choose.

How deep an RC submarine can go depends entirely on the radio transmitter and receiver. The submarine is only limited by depth because at some point the receiver stops receiving the transmission through the water and it stops responding. As of right now most toy RC submarines cannot go any deeper than 3-4 feet without losing connection with the controller.

Unfortunately they haven’t even made higher end models of these submarines that can go deeper so the most that you will get from any RC submarine that is made for personal use is only 3-4 feet deep.

Of course that could change in the future but for now that is as deep as they can go.

In the rest of this article we will dive deeper (see what I did there?) and learn more about RC submarines and what their limitations are.

As the conductivity of a medium goes up, the more a radio signal passing through it is attended. More frequencies are also attenuated more than low rates and tend to reflect off the surface of the water more. Military frequencies are well below assigned hobby radio control bands, but the lowest hobby bands around 27MHz/40MHz can penetrate several feet of water at short distances typically less than 45 meters.

Penetration at these frequencies is excellent in freshwater, a lake or swimming pool and hard to impossible in seawater. The current radio control sets using the 2.4GHz band gets into the water very poorly, and are of no use for model submarines being controlled under the water.

For marine radio to function, even at these frequencies the receiving aerial needs to be completely insulated from the surrounding water. The wire which is covered with plastic provides adequate insulation. It’s not necessary to hold the aerial with an airtight container. But the cut end of that kind must be sealed to prevent water from getting inside. As per the water conditions, positive control can be maintained at perhaps 3 meters in depth.

Since the control of the model submarine may not be reliable at all times, such models typically carry a type of apparatus intended to prevent the RC submarine from being lost if the connection is. There is normally a safe system which detects loss of signal and automatically commands the submarine to surface so you don’t lose your RC sub. Such expert complexity usually makes a model submarine a costly item compared to an RCboat that is used on the surface.

Professional or military remote-controlled diving items may be controlled through a leash or by using a sound signal. Mostly such tools have onboard computers which allow autonomous operation following a set path, so constant information from the controlling base is not necessary. The advent of small cheap equipment such as the Raspberry Pi or Arduino has permitted model submariners to emulate their specialization brethren and provide autonomous control in cases where radio transmission or adequate visibility is lacking.

Of course these types of subs are still not prevalent in a mass produced way because they are far too expensive to build and there isn’t enough demand for these type of subs to make it worthwhile for companies to produce them.

Related Post  Can You Use RC Boats In Saltwater?

How do RC subs dive?

There are two ways that model subs dive:

Electric boats have inherent positive buoyancy and dive by the use of forward motion and angle on the diving planes. When the model stops, the ship floats back to the surface, which can be a big plus as it allows you to never have to worry about losing your submarine when there is a failure of the battery or other issues.

The drawback is that the speed needed to submerge is much more than scale. Dynamic diving models are both the easiest and simplest designed models accessible as complex buoyancy control systems are replaced by diving planes.

Static diving subs, on the other hand, take water into compartments called ballast tanks to increase their weight or reduce their buoyancy. They are the same as the above described dynamic models only much easier to control underwater. The model can dive at a slower, more realistic or scale speed. Many static boats can take on enough water to allow them to sink statically, without forward motion and hover at a fixed depth.

A note about saltwater

Impurities in water such as minerals and chemicals, will limit the ability of radio waves to get into water depending on the concentration of the contaminants. In entirely clean freshwater, for instance, you could expect to maintain radio communication with your submarine at depths of 6-8 feet. A treated swimming pool, however, can reduce that range immediately to something more like 4-6ft. Salty water like ocean water is even worse and the underwater range can drop to a matter of inches.

In summary wireless control of an RC submarine in saltwater is not possible without additional hardware, such as a buoy.

With the rise of technology, RC submarines have started to increase in popularity. RC submarines can be used in most areas due to their ability to transmit live video footage so the person in charge of it can guide it without actually being able to see it. RC submarines maximizes the use of their cameras which provide excellent entertainment to the person driving the sub and any onlookers as well.

Related Post  How Far Can An RC Boat Go?

The RC works like a pro. It can move around in any angle and is suitable for fish tanks or a bathtub. It floats to the surface when it goes out of range. The same happens if it exhausts the batteries.

The significant thing about this RC submarine is that you can capture underwater images with it. The camera can click pictures and at the same time, record a video. The only drawback is that the signal doesn’t reach very far and many people have reported a maximum reach of 3-4 feet away from the controller.

This RC submarine is one that has many classy characteristics. With two different modes, ROV and AUV mode, this single person deployable ROV can easily fit your needs. The RC is easy to control, it has Wi-Fi and LED lights.

This RC submarine measures only four inches and fits in the palm of your hand. This remote-controlled toy submarine rocks twin propellers for forward and reverse movement, streamlined aerodynamic design and can dive to the bottom of the shallow pool section, assuming that it’s no more than three feet deep.

Most remote control submarines will only work to a depth of 3-4 feet in most water types. If you are using the item in a pool with very little chemicals in it then you may be able to get a little bit deeper but that is rare.

Because of this downside RC submarines are not nearly as popular as RC boats, planes, cars, and drones. If you can barely go below the surface of the water what is the point of having a submarine?