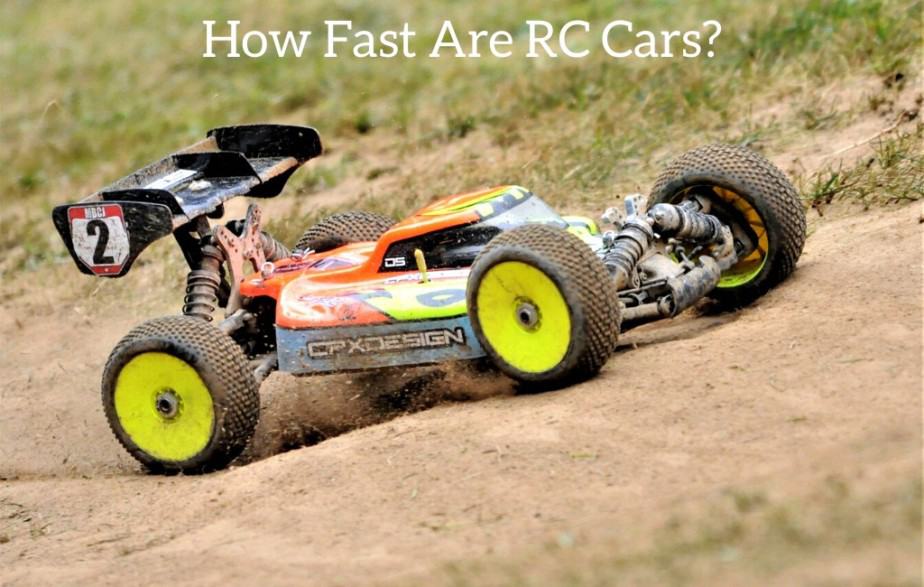 Lots of RC car enthusiasts often want to know how fast a particular RC car can go. It’s hard to get precise answers on the actual speed of all RC cars, but there are several factors and variables which affect and contribute to how fast a remote control car can be.

The speed of RC cars can vary depending on a variety of factors. Some of those factors include:

Each of these and other factors contribute to how fast an RC car can go but all RC cars have the possibility of being quite fast. A nitro RC car has reached top speeds of over 100MPH while a battery powered RC car has done over 200MPH!

No matter who you are, those numbers certainly qualify as fast!

If you are interested in seeing some footage of the fastest RC cars you can check out the video below.

In the rest of this article we are going to help you understand the factors that affect an RC car’s speed so you can get some idea on how fast your remote control car can go and what to do to improve speed if you decide that your car isn’t fast enough.

The first thing to consider is whether the car’s motor is brushed or brushless. Brushed motors, on the one hand, apply a charge to the motor with the use of friction, and this ensures that the power which is turned to actual rotation is less of the raw power.

On the other hand, brushless motors ensure that less energy is lost in the form of noise and heat. For this reason, it is about 10-15% more efficient. What this means is that if you want more speed, you should go for the brushless motor. Normally a brushless motor is a bit more expensive than a brushed one so if you are buying a cheap RC car then it will likely have a brushed motor.

Wondering how you would know if an RC car is brushed or brushless?

A quick online search of the car’s make and model will show you a lot of the car’s details from the manufacturer’s name to other minute details. When you visit the manufacturer’s page, which should include detailed information about the vehicle, the ‘Power’ section should tell you whether or not the car is brushed or brushless.

Related Post  What Are The Best Tamiya RC Cars?

The next thing to look out for in your search for speed is LiPo vs. NiMH batteries. NiMH (Nickel Metal Hydride) batteries usually have both a lower energy density and a lower efficiency than LiPo batteries. NiMH batteries are generally easier to maintain, and they’re safer too however, if more speed is what you really want, you should go for the LiPo batteries. LiPo (Lithium Polymer) batteries generally have more  energy density as well as a higher discharge rate. This means that the batteries can send more power at the same time, allowing for increased levels of power to be sent to the motors.

For most people either of these types of batteries will be fine but if you are trying to go as fast as possible then upgrading your RC car’s battery is a great way to increase its speed.

Acceleration and maximum speed can both be improved in your RC car, but increasing one often means decreasing the other. Acceleration is all about how quick your RC car gets off the line and to a specific speed. It’s commonly referred to as 0-60mph in a matter of seconds on normal cars and can be mentioned as 0-10 or 0-20mph on an RC car.

If your racing area is small or if it has lots of curves, acceleration is far more important than the car’s top speed. If you want to race at top speeds then you will want to have a track with large straight or slightly curved areas. When you have longer straights and fewer curves, you can sustain the top speed a lot easier which means the car with the faster top speed will be better.

Of course, you would also need to be a skilled driver to control the faster car. Below are factors that directly affect acceleration and maximum speed:

Related Post  Which Traxxas RC Car Should You Buy?

On the other hand, a bigger pinion and smaller spur are what you need for faster top speed, but again, you may have to deal with slower acceleration.

Knowing what type of track that you will be racing on will determine how you want to set up your car. If you are serious about racing then some people will even have multiple cars gears specific ways for a specific type of track.

Here is a secret that some people who are newer to RC racing haven’t heard about. Many manufacturers will deliberately make RC cars with sub standard tires so enthusiasts can come back for something better.

Poor quality tires are not durable, and they will have poor traction. With better tires, cars can get better speed and even handle curves and turns better.

Upgrading your car to better tires will help it achieve better acceleration as well as higher top speeds. There are some tires that are designed for asphalt or off road driving so make sure you have the correct type of tire for where you will be driving your car at.

Loose and uneven surfaces will considerably slow your car down. Wet or dry ground is also a factor that can slow it down. To have good speed, your car would need to be compatible with the terrain. Most of the time, you can achieve the highest speeds on flat surfaces that are smooth such as concrete or asphalt.

Since you don’t have to worry about obstacles or crashing as easily on that surface you can go much faster without worrying about damaging your RC car.

The surface that you choose will affect your acceleration and top speed so make sure to take this into account if you are trying to go as fast as possible.

How fast can a remote control car really go?

It’s a marketing effort geared towards making more money however not all manufacturers use this trick so be sure that you read carefully so you can know exactly what speeds to expect.

Actual speed refers to how fast the RC car really is. On a general note, hobby-grade RCs are a lot faster than toy-grade RC cars. Even though electric RC cars are famous for being super fast, you will want to make sure that the one you are buying lists the actual speeds or that you convert the scale speed to the actual speed so that you compare the models correctly.

Scale speed refers to the fastness of the RC car in comparison with the full-size model. To look at it in a much simpler way: a 1:10 scale RC would go about 1/10 the speed of the full-scale car, which it is modeled after.

The relationship that exists between the size of an RC vehicle and its scale and actual speeds is not always true. RC toy cars are a lot slower, especially those ones made for toddlers. Also, some modified RC cars could have actual speeds that are a lot faster than what you would expect, considering their size.

Generally speaking, even though size can actually have an impact on the speed of the car, this is not always the case.

RC cars are quite fast in general and as seen in the video at the beginning of this article can reach incredibly high speeds. Whether you are trying to go that fast or not hopefully this article has given you some helpful information that you can use to speed up your RC car to get more of an enjoyable experience.

If you would like some additional tips on how to increase the speed of your RC car you can check out the video below to find some more ideas.