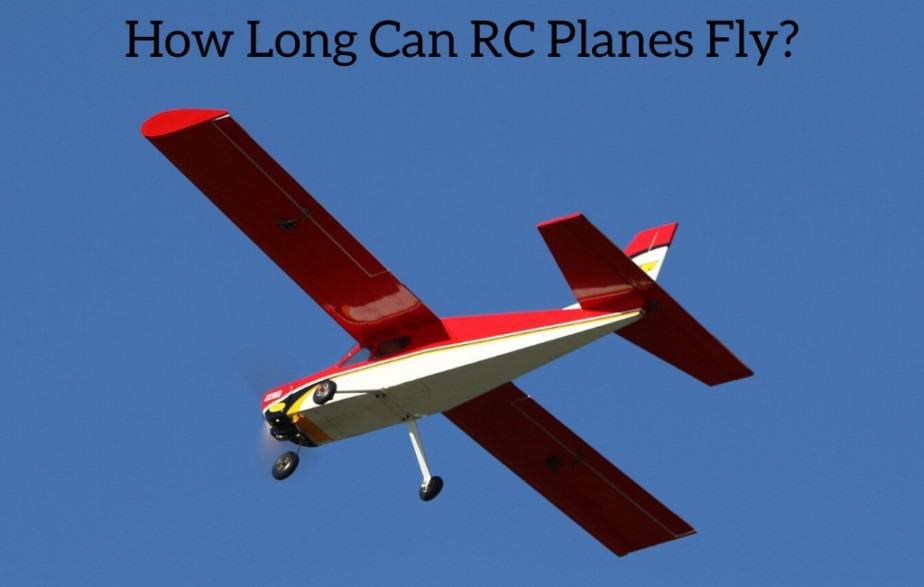 Radio-controlled planes can actually fly significantly long distances. Of course how far an RC plane can fly depends on a variety of different factors including the type of plane, batteries, wind, and more. Each of these factors will affect how long your plane can be in the air before you have to land it.

The easiest way to know how long your exact model will fly is to test it out. You can do this by fully charging the battery and then running the plane for 10 minutes. Once you land the plane then check and see how much power is left on your battery. If it is ¾ depleted then you know that you only have around 13 minutes or so of flight time.

One important thing to remember and one of the reasons why an answer to this question is so difficult is because of the wind. If you are flying your plane into a headwind the entire time then the batteries will drain much faster than if you are flying with a tailwind. Since crashing your plane is never a good option buying a plane that will warn you when the batteries are almost dead is well worth the cost!

Not only is wind a large factor but the varying types of models also make it difficult to get an exact flight time.  There are several types of transmitters and receivers, and this difference in the sophistication of the component parts can affect how long your RC plane can stay in the air.

The size of the RC plane can also make a difference as they can be either so small that they can be flown indoors, or so large that you may need a large outdoor space and a lot of training to fly it.

Each type, size and style of RC plane will have a different flight time for it which is why running a couple of quick tests on your battery life is the best way to know exactly how long your plane can fly for. The plane style that you choose to purchase can also have a large effect on the flight time of the RC plane.

We will discuss the different models below.

This style of aircraft is the best representation of a real aircraft. From its exterior design to its internal components, these planes will often mirror the looks and feel of a real plane.  This type of RC airplane has the ability to fly for a decent amount of time but that varies depending on the size and how many batteries they carry. The larger aircraft version of this type of RC plane can often fly for an hour or more while a smaller plan will only last 10-15 minutes of flight time.  This aircraft can be a lighter-than-air (LTA) model or the heavier-than-air fixed-wing model.

This style of plane is likely to last longer and get longer flight times than any other plane since it uses the air to stay aloft longer. Glider planes can vary in size as can the flight times but in average a glider plane style will last 2-3 times longer before needing to land.

Gliders are easy to operate, and you can fly them to relieve pressure or stress since they will often be slower and not as fast paced of a flight when compared to a normal RC plane. Gliders are normally controlled by a two-way channel that controls the elevator, the aileron, and the rudder.

Combat style gliders tend to last longer in the air because their rudders are stronger. However, to fly them, you must have great dexterity because they are normally faster than a normal glider. If they are flown by someone who does not know how to maneuver them properly it is easy to crash them into obstacles or “lose the wind” and have your plane go down. Gliders cannot be flown indoors since there is no wind or much air movement so they are relegated to only being used outside. Since gliders are traditionally larger planes then you will need large open spaces to use them in so large parks or empty land works best for this style of RC plane.

The advantage that gliders have over other types of aircraft is their large wing section. These large wings help the planes to produce exceptional levels of lift. The lift it provides ensures that once the weather conditions are favorable, you can fly the aircraft for a very long time without using hardly any battery power at all.

Of course this is only true once you master the use of the glider and know how to control it properly to take full advantage of the air movement.

With RC gliders, the only concern you may have is whether your radio controller has enough battery capacity to last throughout the flight.

Flying gliders for prolonged periods of time depends on your knowledge of how gliders work. Your glider can last longer in the air if you launch the glider and fly at an altitude that is convenient for you. Once your glider is in the air, and at your preferred altitude, turn off the motor and fly your glider without it.

Once the motor is off, you can use the wind to keep your glider aloft.  If your glider begins to lose altitude, power on the motor again and you can ascend back to the desired height before shutting off your motor once more.

Flying for a lengthy period can also be achieved by strictly following some basic flying rules. Some of these rules may seem inconsequential, but obeying them can be the difference between having your flight cut short  and having a long, enjoyable one.

If you want some additional tips about the proper way to fly your RC plane be sure and check out the video below.

How long your plane will be able to fly for is unfortunately not an easy thing to find out without testing the plane yourself. Manufacturers can often give some general guidelines but often those will be quite inaccurate and will rarely match up to the real flight times that you have.

If you are always flying into the wind you will often discover that your battery life is considerably shorter so knowing what direction the wind is blowing in before you ever take off is an important thing to consider.

If you are interested in purchasing an RC plane, our favorite models are: