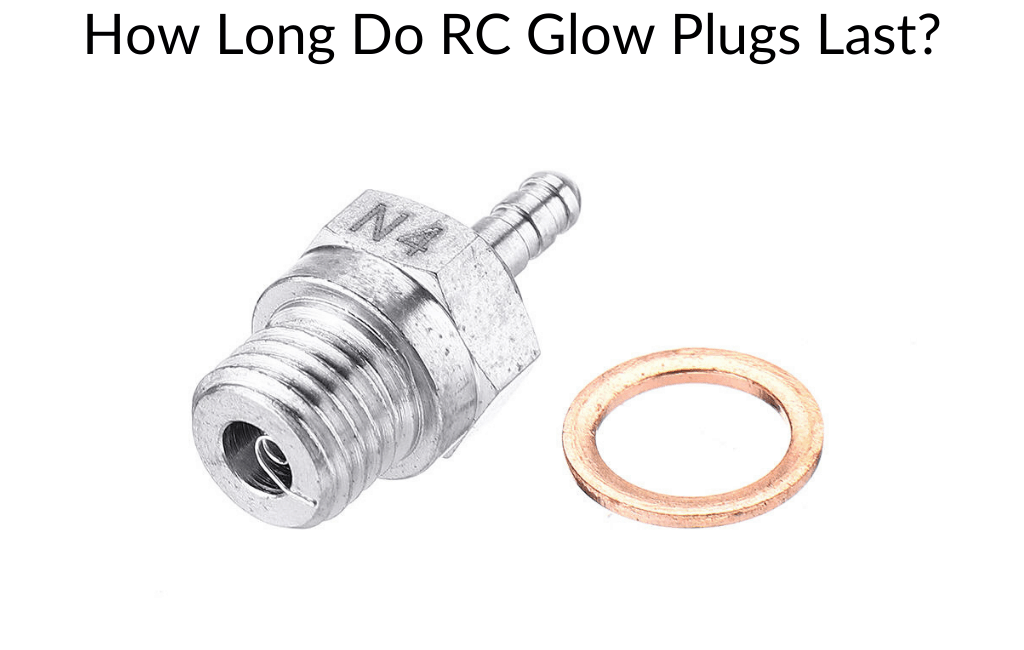 Each RC vehicle is made up of some of the smallest mechanical objects and each serve their own purpose. Each individual part is important for the proper functioning of the vehicle be it an RC bike, plane or an RC car.

RC glow plugs are considered to be the heart of a nitro engine on RC vehicles that use this type of motor. The glow plug is what causes the fuel to ignite and allows the engine to run. Without a glow plug starting and operating a nitro RC becomes difficult if not impossible.

Since glow plugs are such an important part of your RC vehicle that runs on nitro fuel knowing when exactly they will stop working and how long they will last is an important piece of information.

How long a glow plug will last will vary depending on whether your vehicle is tuned properly as well as what type of glow plug you are using. In general glow plugs will last for 2-4 gallons of fuel use if the vehicle is properly tuned.

Obviously having it measured by gallons of fuel makes it a little confusing for some people but those 2-4 gallons will average out to around 5-10 hours of actual use of your nitro RC before your glow plug will likely need replaced. The amount of time varies a lot because if you are running your RC vehicle at full throttle it will burn through fuel faster than if you are just putting around the park.

If you use your RC car once a week for an hour then you will likely find yourself needing to replace the glow plug once every month or two. Most of the time it is best to buy the glow plugs in bulk (such as this 6 pack found on Amazon) as that will save you a decent amount of money over buying the glow plugs one at a time.

To learn exactly how you should replace the glow plug you can check out the video below.

Related Post  How Long Should You Charge A Traxxas Battery?

Glow plugs are not only limited for the use of RC cars, there are actually multiple different types of glow plugs available that you can choose according to the engine and the vehicle. For example, there is a different glow plug for an engine of an RC plane, RC bike or an RC helicopter as well. Other specifications that should be kept in mind while deciding on a glow plug are:

Glow plugs and how they function

First of all, it is important to understand the function of a basic glow plug and one of the most common mistakes that should be avoided is getting confused between a glow plug and a regular spark plug that is present in cars. It is also important that you understand the difference between a spark plug and glow plugs so that you can choose the best and the correct device for your RC vehicle. Coming back to the functions of a glow plug, these help in the ignition and provide the much needed start for the fuel or the air mixture in the chamber (commonly called the combustion chamber) of the engine.

If we consider it in much simpler language, RC glow plugs provide the RC vehicle with the required heat that causes the air mixture in the cylinder to explode. If we look at four wheelers or cars, the gasoline chamber present in them uses the help of spark plugs to initialise the process and for the air mixture to explode instead of glow plugs that nitro RC vehicles use.

The basic use of the RC glow plugs, as well as the spark plugs present in regular automobiles, is somewhat similar but the functions and the process of how they accomplish the explosion of air mixture varies greatly. Let’s take a look at the simple differences between both these processes followed by RC glow plugs and spark plugs in regular cars.

It is already established that both these plugs are used differently and in different types and sizes of vehicles for initiating the process of the explosion of air mixture or fuel in the cylinder.

Both of these plugs vary in the way they accomplish this task, let us see how they each function:

Glow plugs: An RC glow plug is made up of a coil that is constructed of platinum. When the nitro-powered engine is started, a specific volt of electric charge should be applied to the glow plug so that it can process further. As soon as the charge is provided, the coil of the plug starts glowing and the engine starts as soon as the temperature of the combustion chamber reaches the ignition point of fuel or air mixture.

As the engine turns over, the pressure inside the combustion chamber of the cylinder increases along with the pressure developed inside the air mixture, thus, in turn, the temperature also rises.

It is a good idea to always have at least one extra glow plug on hand as the variance in the length of time that they last makes it likely that they will go out at an inconvenient time. Having an extra plug with you will make it far less inconvenient.

Early signs of needing to replace your glow plug include:

How long a glow plug will last will unfortunately vary quite a bit depending on how well your RC vehicle is tuned as well as how you drive it. Just like flooring a normal car will cause it to get lower gas mileage so too will flooring your RC car cause your glow plugs to wear out faster and use more fuel.

It is a good idea to always have some extra glow plugs on hand so buying them in bulk in the form of a 6 pack, for sale here on Amazon, will not only save you the frustration of not being able to use your RC car but will also save you some money.