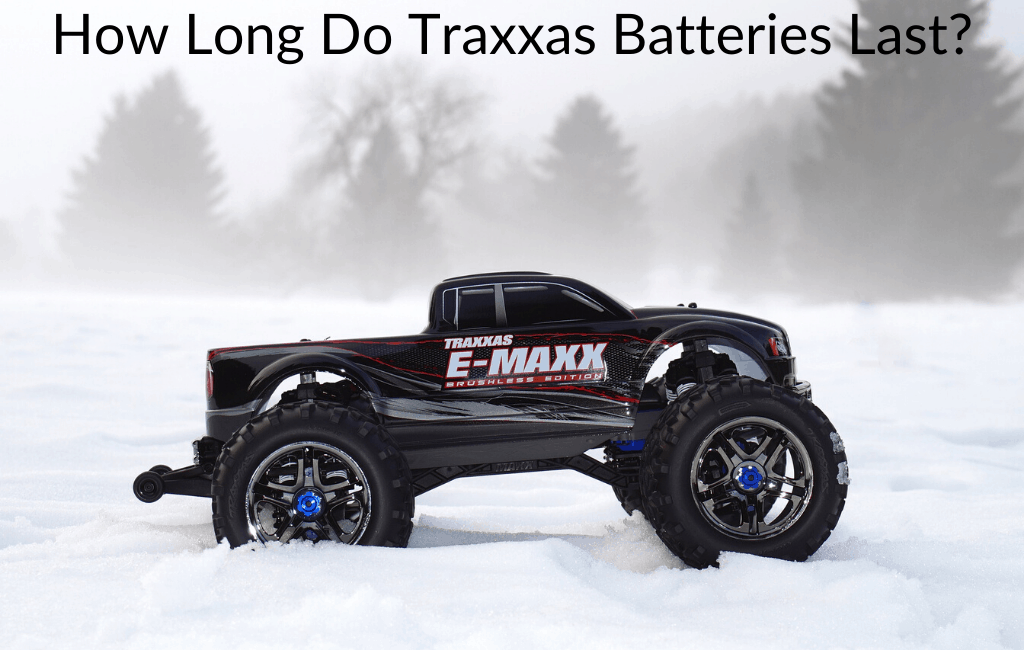 No matter how long you have been using RC vehicles you will always want to get more use out of every charge and out of your battery before replacing it. Every RC racer certainly wants to have an RC battery pack that gives them longer runtime as that means you can have a lot more fun between charges!  There are a number of factors that determine how long an RC battery can last, and in this article, we’ll be talking about how long your Traxxas RC batteries can last both per charge and before you need to have them replaced.

In general Traxxas RC batteries will last 20-40 minutes of use before they need to be recharged but that can vary based on how hard you drive the car as well as the type of battery you have. How long a Traxxas battery will last before needing to be replaced will also vary but typically they will last for 500-1,000 charge/discharge cycles.

To see the most popular RC cars and accessories on the market right now just click here.

To learn more about the run time of the Traxxas batteries between charges you can check out the video below.

How Long Do Traxxas Batteries Last Per Charge (also known as runtime)?

There’s a variety of RC batteries used in all-electric RC cars, including those from Traxxas. The rechargeable batteries are nickel-metal-hydride (NiMH), nickel-cadmium (NiCd), lithium-polymer (LiPO), and lithium-ion (Li-ion). There are also alkaline batteries but, the downside of alkaline batteries is that they put out a low amount of  power so they are normally only used for the cheapest and smallest RC cars or used for the remotes.

There are a number of factors that determine how much run time a battery can give you per charge.

A standard 8.4v Traxxas RC car battery pack will typically be right around 3,000MaHs (which is what this one is). The MaH is what shows the capacity of the battery and essentially means the higher the MaH, the higher the capacity of the battery, and the longer it will last between charges. But, batteries with higher MaH also normally cost more and have a longer charging time. This specific 3,000 MaH NiMH battery will last for around 20 minutes of runtime but some people have reported getting 40 minutes out of it by babying their RC car!

Another thing that determines the runtime of a battery is the surface it is driven on, the way it is driven, and the power the engine uses.

Many electric RC car batteries are designed to last for at least 15 minutes with more expensive batteries lasting 30-45 minutes. Most RC cars come with a battery of 7.2 volts and a capacity of 1800 MaH or more but those can easily be upgraded to better and bigger batteries that will give you longer run times.

The point is, there is no specific amount of runtime for all batteries since it would depend on the MaH of that particular battery as well as how you drive the RC car. Traxxas cars use  the same kinds of batteries that other RC cars use, and so, as already mentioned, how much runtime you can get from your Traxxas battery on a single charge will depend on the MaH and usage as well.

How Long Do Traxxas Batteries Last Before They Need to Be Replaced?

The lifetime of a battery is broadly defined as the length of acceptable performance a battery offers, and this is measured in years or in charge/discharge cycles. It may be referred to as the amount of time it takes for the battery to fall to 80% of it’s new capacity.

Like all batteries, Traxxas batteries decay with both age and use. With Traxxas LiPo batteries, most of the loss of capacity is a result of age unless they are used very heavily. You should be able to get up to 300-500 charges before your LiPo batteries are really tired, but you may be able to get more if you take good care of them. All things being equal, these batteries should last for up to 2 years. You can slow down degradation by storing them in a cool place and at 40% charge and by charging slowly as well.

Traxxas NiMH batteries on the other hand can last up to 1,000 charge/discharge cycles but that will vary depending on how you use them, charge them, and store them as well. RC batteries that are properly cared for will last considerably longer than those that are not.

LiPo delivers a linear power output, and when a drop in voltage happens there is also a sudden drop in power. When this happens, you can’t use the engine anymore until you recharge the batteries. The Lithium batteries are light in weight and are highly capable, powering even electric motors that are highly demanding with their high discharge rates but, when it comes to charging and discharging, Lithium batteries have some disadvantages.

Lithium cells have to be charged separately from NiCd and NiMh, and this is the riskiest part of charging Lithium cells. Also, because LiPos are made with volatile electrolytes, they are susceptible to exploding (although this is far more rare than most people believe). Keep in mind that RC LiPo batteries need to be properly cared for and that the charging, discharging, and storage can also affect its lifespan greatly.

How quickly the battery can be safely discharged is referred to as the discharge rate. With LiPo batteries, this is called the “C” rating. If a battery has a discharge rating of 1C, the explanation is that you can safely discharge it in 1 hour and this pattern applies to whatever other number comes before the C. Seeing as batteries with capacities are rated in milliAmp-hours (mAh), it would be great to understand the idea of Watts, Volts, and Amps.

RC battery chargers are also very important to the whole performance of RC batteries. Seeing as there are so many different batteries on the RC market, let’s look at the three most popular types of chargers.

Slow Charger: This type of charger is significantly cheaper, and it normally puts out about 150 mAh and takes a much longer time to charge your battery. Also, the charger doesn’t normally automatically turn off when it is fully charged with this type of charger.

Fast Charger: This type of charger puts out up to 5 amps and takes a much shorter amount of time to fully charge. The charger automatically shuts down when the cells are fully charged.

Field Charger: This is your convenient and carry-on charger to help you charge your batteries wherever you are. Just clip the alligator clamps to any 12-volt battery, and your batteries are charging.

Traxxas RC batteries will typically last 20-40 minutes between each charge depending on how you use them and the type of battery that you use. There are many variables to how long a Traxxas RC battery will last between charges but that is a pretty good estimate for most of them.

Traxxas RC batteries will also typically last you for 500-1,000 charge/discharge cycles which for most people will end up being multiple years of use between replacing the battery. How well you take care of and store your battery can have a large effect on this as well as whether you have a NiMH or LiPo battery.