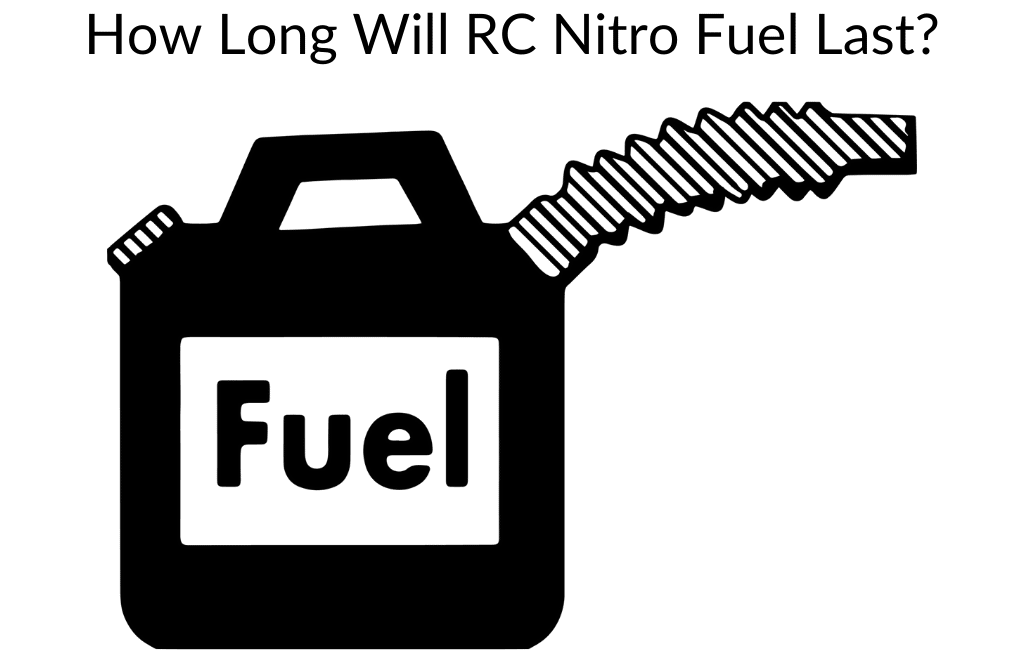 Have you ever heard of a nitro RC engine? In recent years they have been growing in popularity and demand. These nitro engines are essential parts of some of the coolest things in the world- nitro RC cars, trucks, and planes.

One huge downside to nitro RC vehicles is that you have to use actual nitro fuel rather than batteries like most other RC vehicles use. This nitro fuel can go bad if you leave it sitting around for too long, but what exactly is too long? How long does this fuel actually last?

We will discuss how to properly store nitro fuel a little bit later in this article. If you would prefer to not wait you can scroll down or even check out this video below.

Before we get to storing the nitro fuel I want to dive a little bit deeper into nitro engines and their uses. Often when people hear nitro they think of NOS from the movies and envision their RC car flying across the pavement, but is that what it really is?

What is a Nitro Engine and where is it used?

Nitro engines are basically engines that are powered by nitro fuel. This fuel will usually contain some amount of nitromethane and methanol. Such types of engines are usually found in RC cars, trucks, and rarely planes.

These nitro RC vehicles are often much more fun to use because they sound and act very similar to real vehicles but you can use them virtually anywhere. Of course nitro engines don’t come without their downsides. There is a lot of maintenance that comes with them as well.

What is RC nitro fuel?

Now one of the most important things required for the proper and smooth functioning of RC cars and trucks and their nitro engines is their fuel. Afterall, you wouldn’t expect your normal car to work without fueling it up, so neither will your RC car (assuming you have a nitro one).  This fuel that is used in RC cars is nitro fuel or nitro RC fuel.

A lot of people buy this fuel in bulk and then store it to try and save some money, but many people don’t stop to think about the most important question related to this fuel. That one question that many people either ignore or don’t know about while storing the RC nitro fuel is whether the fuel will go bad after some time.

For example, when you go out to buy RC nitro fuel and end up buying a huge quantity that you do not need, you might wonder what you will do with the rest of it. Can you use it again for the next time you race? How long will it stay good and usable?

How long can you store the nitro fuel?

It is important to know that RC nitro fuel will not last forever in its usable, normal state. Nitro fuel does go bad after some time of not being used just like normal gasoline will. How long it will last however is something that requires a little more explanation.

Unfortunately there is no set amount of time where the fuel will automatically go bad. There are quite a few variables.

Theoretically, RC nitro fuel can last forever, but this is possible only if the nitro fuel is stored exactly right so in practice the fuel lasting forever is not really possible. However,  storage is probably the most important thing to take care of to keep your nitro fuel usable for as long as possible.

Related Post  How To Tell If RC Glow Plug Is Bad?

There are a few things you need to keep in mind if you are planning to store RC nitro fuel for a long period of time. Here are some of the most crucial points to be kept in mind the next time you decide to store any of your leftover nitro fuel for future usage.

Ideally the RC nitro fuel can stay in its perfectly normal state for almost 20 to 30 years if stored well but often you will not be able to keep the fuel from getting moisture in it for that long. Many people have reported using fuel that was decades old without any issues while other people have said that fuel will only last then 3-5 years before going bad.

This variance could certainly be because of the way the fuel was stored but it could also be that fuel in different climates handle the time in storage differently as well.

Basically you can assume that as long as you have stored the fuel properly it will last you multiple years without any problem and if it lasts you longer then it is just a bonus!

So that’s that, folks! You now have your answer to how long RC nitro fuel can last.

Remember, storage is the main point here. Next time you go to buy any amount of nitro fuel, you can buy large quantities and not be worried about what you will do with the fuel that will be left over now that you know you can store it for future use.

So go ahead and get your fuel! Just make sure that the gallon or can or tank used to store the RC nitro fuel is sealed tightly and that it is stored in a cool dry place away from the sun.