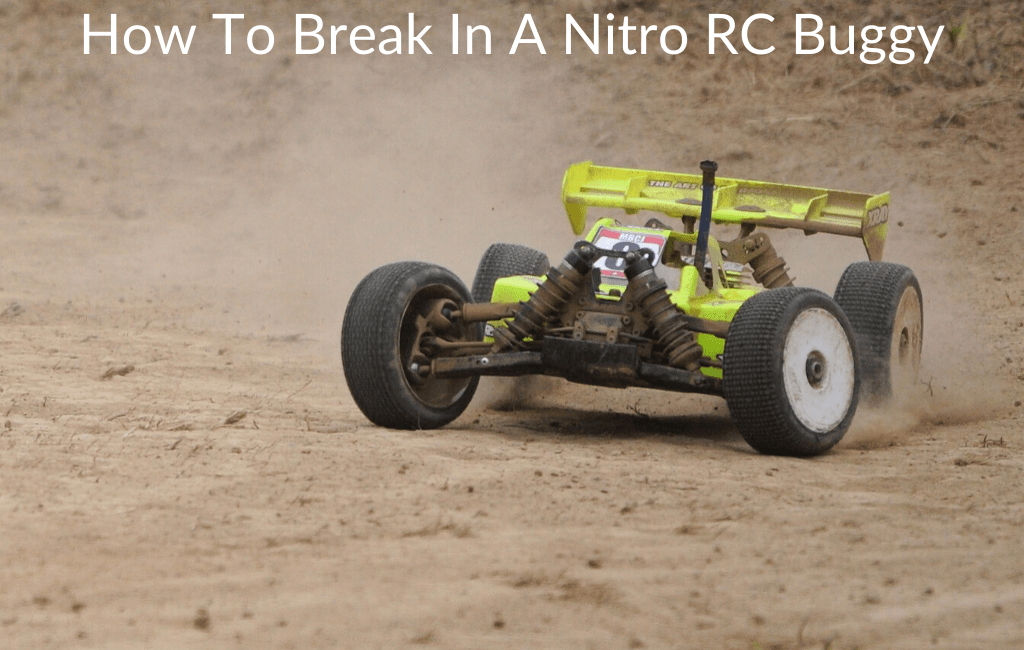 Breaking in the engine of a Nitro RC buggy is a common process that all new nitro RC engines are supposed to undergo. The main purpose of the break-in is to ensure that you can gain maximum performance and make sure that the engine parts are durable.

While this is a common process, it is not as simple as a lot of people think. However, it is not too difficult either. Just follow the correct procedure, and you can be sure of having a reliable nitro engine that doesn’t break down all the time.

It will only take you a few hours to carry out the break-in process and a few nitro fuel tanks to be fully done. Just be patient, and you will achieve the results that you want.

If you want to watch a video on how to do the process instead of reading about it you can check out the video below.

So, on to the break-in process

What to Check Before Breaking In Your Motor

There are a few things you need to check before carrying out the break-in process. This will make sure that you do not get stuck later in the process.

First of all, read the manual and understand it to learn about your nitro engine’s settings. This will also help you know where to locate your carburetor’s screws. In preparing your nitro engine for breaking in, you need to connect the glow plug to the top of the cylinder head while making sure it’s not too tight.

Next, fill the fuel tank of your car.

Related Post  How Fast Are RC Cars? How To Make Them Faster

Next and very importantly, switch on the transmitter and make sure that the throttle, brake, and steering servos are responsive. Once you’re sure everything is working well, go on and do the factory settings on the carburetor needle. You can confirm from your user manual that you have the right configuration.

How many tanks of fuel you use will vary, but you can use up to 8 tanks to make sure that the engine has actually broken in and will not give you any problems in the future. However, you can use less than this number, with 5 being the minimum to ensure the best results.

Make sure to have enough nitro fuel on hand so you don’t run out part way through the process.

Ensure that the engine fuel is at the carburetor, then connect the starter and start the engine. Let the engine run at low speed, nothing more than a quarter throttle to be precise. Monitor the temperature of the engine through the process and make sure it’s reading between 195F and 205F. Run your nitro car till the fuel is nearly empty and be sure not to run on an empty tank, so the engine doesn’t get damaged at the early stage.

Make sure that the piston head is at the cylinder’s bottom then you can let your RC car cool down. After about 15 to 20 minutes, you can move to the next tank.

Start the engine and give it a few seconds to idle. After, run it at half throttle while checking the temperature like with the first tank for about 2 to 3 minutes. The temperature should be between 195F to 205F by now. If it is not, then you would need to manually configure it. If the temperature is too low, find the speed needle and turn it clockwise by 1/16. If it is above, make the high-speed needle 1/16 turn counter-clockwise. Run the engine till the tank is almost empty, then make sure the piston is at the cylinder’s bottom. Turn off the engine and let it take some time to completely cool.

Related Post  How Hot Should An RC Motor Get?

Your RC nitro car should be gaining momentum on this tank so you can give it a high throttle. Give the high-speed needle a 1/16 turn clockwise to let it lean and then go on and start the engine, this time, running it at a 3/4 throttle. Stay at this speed for 2 to 3 minutes and then check the temperature to ensure it’s ranging between 205F and 220F. It should be neither too low nor too high. Run it continuously till the fuel is almost empty before you stop it. Have the piston at BCD then give it 15 to 20 minutes to cool.

Prior to starting the engine on your fourth to the sixth tanks, you should turn the high-speed needle 1/8 clockwise. As soon as you’ve done this, start the car and do all the steps from the third tank. Make sure that you maintain the temperature and the throttle. This fourth step should be continued until you get to the 6th nitro fuel tank.

The break-in process begins to run its course at this stage. Start the engine and run it at an average speed. While you are at that, ensure that the temperature is between 210F and 230F. As soon as you have done this, go to high speed until you see the pipe emitting blue smoke. If you see that there is no smoke coming out, rich the engine, and if there’s smoke, but the speed isn’t going high enough, lean it. As soon as you are done, stop the engine and give it time to completely cool down.

Simply repeat the process you carried out in tank 7.

Safety Precautions for Breaking in an RC Nitro Engine

There are some safety precautions you need to take when you’re carrying out the break-in process on your new RC buggy. Here are some of them:

Generally, it will take you 8 tanks at most for your engine to break in. Do this to ensure that your nitro buggy performs at its peak performance.

That’s it! You now have a fully broken in nitro RC buggy and are ready to race it. As long as you go through this process carefully your nitro RC car will give you use for many years to come and breakdowns shouldn’t happen too often.

Be sure and carefully follow each step and make sure that you follow the safety tips listed above as well to keep you and your new RC car safe.