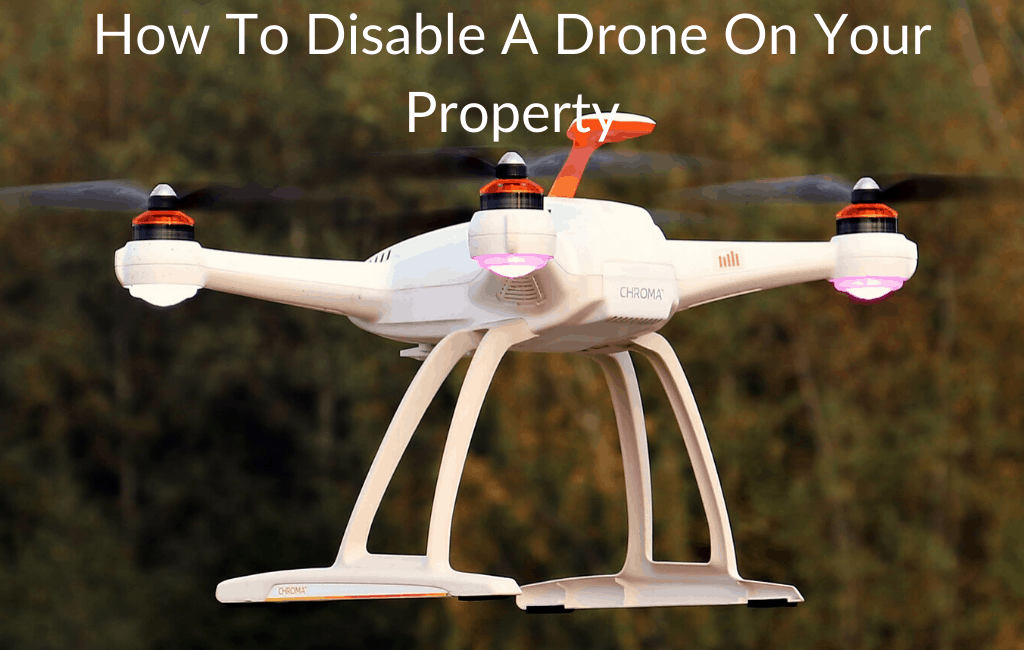 Over the last few years drones have become more and more prevalent and more people seem to be getting them all of the time. With this massive increase in drone use by amateurs there has also become more issues with privacy and people flying their drones over and next to people’s homes.

This can especially become a problem if your home is near a park or a picturesque view! So what can you do if someone is flying a drone over your property? Can you disable it and how can you do so?

Some of the most common ways to disable a drone on your property is to:

The legality of each of these varies by where in the world and even which state or territory that you are in so make sure to know your local laws before you ever do anything.

Since the different uses for drones continues to go up as the technology gets more powerful the number of drone users is likely to keep going up in the future as well. Drone users are not supposed to fly over private property but many people either don’t know that or simply don’t care.

We will discuss each of the methods mentioned above later in this article but before you ever do anything to a drone it would be a good idea to know exactly what the result will be. For example if you damage a drone by throwing a net on it or disabling it are you responsible for those damages even though the drone was in the wrong spot?

This is where knowing what the laws in your local area say and mean so that way you aren’t left with a surprise bill or lawsuit even though the drone pilot was the one in the wrong.

To see some other tips on how to take down drones you can check out this video below but again, make sure you know all the local laws.

Shooting down drones with guns

This is the most convenient way to take down a drone. It is easier and cheaper than some of the other methods mentioned below however, it also opens you up to a lot of possible dangers. When shooting down a drone, a possible result may vary between states and even different counties in a state.

Related Post  What Is The Farthest A Drone Can Go?

One thing is consistent across almost every place and that is shooting a gun in a residential area is not allowed!

Unfortunately, in the USA you are not allowed to shoot down a drone even if it is on your property in most circumstances. Before you pull your trigger make sure to read this article carefully. What if someone spots a drone hovering in your secure facility perimeter? What should be done?

Well, I am aware that a drone’s existence at some point might be irritating and intimidating to you. However, according to US federal law, you cannot shoot any aircraft including drones legally.

The Federal Aviation Administration or FAA says that aircraft of any size is covered by the title 18 of the United States code of 32 that states that “whoever wilfully set fires to, destroys or disables – shall be fined under this title or imprisoned not more than twenty years or both”.

In simple words, you cannot shoot down a drone in the United States without getting into trouble with the law. Laws in other countries might vary.

This one is an extraordinary way of disabling a drone. This might be applicable only if you are in coastlines or the water of course. There was an event held in New Zealand way back in 2016 when everyone was just looking out for their favorite jet ski riders that were racing with each other.

It looked like an ordinary event that day when one rider particularly didn’t want to share the air with anything else. The jet ski was in the air for a few seconds and smashed a low-flying drone. Propellers and other parts showered into the sea as the drone was torn apart by a Jet Ski.

This might be a warning to all drones not to intrude on human privacy but it probably isn’t a popular way to disable a drone!

This way is a much safer way to disable drones and it is especially safer compared to using a gun. Several countries are already implementing nets as a way to catch rogue drones.

At Michigan Tech University, students developed a drone that can shoot a net up to 40 feet just to trap and catch smaller drones then deliver them to their owners once they are downed.

This drone is known as Michigan Tech’s octocopter.

Developers have stated that these drones can be flown autonomously or by up to two individuals. Its best feature is that the net can be cast quickly enough to catch even the fastest drone. Once the drones are caught by the net, gravity pulls them downward and the net will swing until it reaches the ground.

Of course you probably won’t be using something this fancy but something as simple as a fishing net will easily down a drone by getting caught in the propellers or by weighing the drone down to where it can’t fly.

Something as simple as this “party net” from Amazon would take down most drones easily.

There has been a spoofing technology introduced by SkySafe. It is a start-up that is designed to protect airports from rogue drones. Grant Jordan, a graduate of MIT spent four years in the United States Air Force and has acquired several skills that make him very dangerous to drones. Together with his co-founders, they have launched SkySafe which is a drone protecting start-up that will help airspace facilities.

This technology currently isn’t available for individuals to use but it could be in the future.

This is a feature of a software program that uses the Global Positioning System/GPS or Radio Frequency Identification (RFID) to define geographical boundaries. Its passive feature is always on, though it relies on Wi-Fi or cellular data rather than their GPS or RFID and works in the background.

When any person or device enters a specific boundary or area then it will automatically release an alert. It will tell you that there is a device that crossed your property or leaves your property. This might not work to take down the drone but it will alert you when one has invaded your property and you can then use a net or other method to bring it down.

This death ray was developed by a group of British technology firms. These drones can knock any unmanned aerial vehicle out from the sky by turning it off in mid-air and it will even work up to a mile away. The executive vice president of Liteye systems even said “If I can see it, I can kill it”.

The interest in drone-killers has grown since the number of drones continues to  increase.

Waves that are released by this device can sufficiently brief and narrow drones. Though it is not the most portable solution it is a fully integrated anti-drone defense system that can knock out any unauthorized drones. It will detect, classify, disrupt and track threats of any rogue drones.

Although you cannot buy a drone death ray at your local Walmart you can find drone jammers on a variety of sites. You do have to make sure that they are legal to use in your country and area as some places do not allow signal jammers to be used.

In this article we have given a few different ways that you can disable a drone that is flying over your property. For most people the best method is going to be a net as they are cheap to purchase and you don’t have to worry about hurting someone if you miss like you would with shooting down the drone. A net is also the better option since it is quiet so it can be used virtually anywhere and at any time no matter if you live in a residential area or in the country.