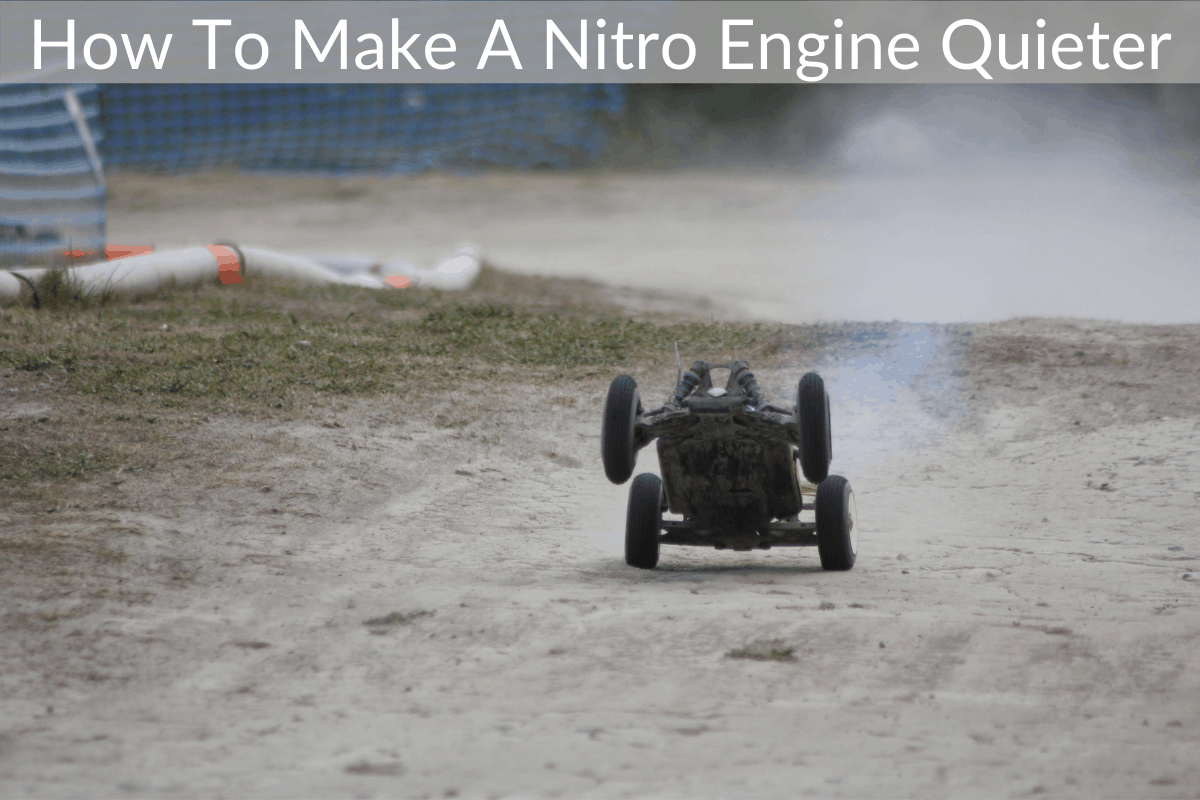 If you own a nitro RC car and you have ever gone racing or used it before you know just how loud the nitro engines can be. When you look at the RC cars you would not expect them to be very loud because the engines are so small, but because they normally do not have a large muffler on them or long exhaust pipes then they actually sound quite loud.

A nitro RC car engine being loud is one of the major downsides to even owning a nitro RC car instead of an electric RC car. Because the noise is so annoying and extremely loud many people have often asked how to make a nitro engine quieter.

There are a couple of ways to make a nitro engine quieter. The first way is by buying a muffler for the engine as this will help with the sound. The second way is to make your own exhaust pipes and muffler.

If you want to purchase a nitro engine muffler, you can find them by clicking here.

Are all nitro RC cars loud?

Related Post  Can You Run A Nitro RC Car In The Winter?

To put 100 db into comparison the human ear can normally only handle up to 110 db without having excruciating pain. At 100db, you can have serious damage to your hearing after 8 hours of exposure. Some people even begin to have pain in their ears at 70db. This is why if your nitro RC car is any louder than 70db, you may begin to get complaints from your neighbors or people around you.

If you have ever owned a nitro RC car, then you know that although they can be dangerous, if not used properly, they are perfectly safe if used properly. Proper use of a nitro RC car would be if it was used in outdoor settings only and not used in crowded areas. The part about nitro RC cars that make them dangerous is if people do not use them as they are intended to be used.

If you are using a nitro RC car indoors, then the nitro RC car can be extremely dangerous as these nitro engines expel fumes into the air that are harmful to humans. Another way that these nitro RC cars are dangerous is the fact that they are so powerful and fast. If you are trying to use a nitro RC car in a crowded place or even at a park where there are quite a few people, you have a great possibility of injuring someone. Although this is probably not your intention, because the nitro RC car is so fast, you may end up accidentally running into someone as there is not enough room to race.

Related Post  Can You Use Regular Spray Paint On RC Car Bodies?

Although nitro RC cars have a lot of power, many people today are looking at if an electric RC car is better than the nitro RC car. Because this is such a great question we will compare both of the cars below.

Nitro RC cars are powered by nitro fuel. A nitro RC car can be run for a longer period of time then an electric RC car. This is because you do not need a battery and the engine will run on fuel a lot longer than it will on a battery. The downside of a nitro RC car is the fact that you can only run it outside as running them inside will cause problems because of the fumes. The other downside of a nitro RC car is the fact that they require more maintenance and work than an electric RC car. Also, if you are planning on racing a nitro RC car you will need a secondary person to refuel your car while you are in the middle of your race if it is a long one.

An electric RC car is powered by a rechargeable battery. These types of RC cars can be run indoors as they do not have any fumes as they do not have a motor. Electric RC cars normally have lower maintenance compared to a nitro RC car and they are cheaper to run as you do not need to purchase fuel. Although these cars are much quieter than a nitro RC car, that is not necessarily a good thing as most people like the roar of the engines. Although a nitro RC car is normally faster when you first get it, the electric RC car can be upgraded to have higher performing parts that will make it more durable as well as faster than a nitro RC car.

Related Post  Want The Fastest RC Car? (This One Beats The Competition)

When you look at these two types of RC cars, it is easy to see that they are two totally different cars. Most of the time if someone likes an electric RC car, then they will not like a nitro RC car. This goes the opposite way as well. This means that if you have a nitro RC car, you probably do not like electric RC cars. As you can see from comparing these two models, they both have their positives and negatives. This is why it is up to you to know which RC car you prefer and which one you want to own.

Now that you know that it is possible to make a nitro RC car engine quieter, you can see why so many people are talking about it. Noone wants an RC car that is extremely loud, and sometimes even damaging to people’s hearing. If you are using this car in public, it is very important that you do not make people mad by having it be extremely loud when there is an easy way to make it quieter.

If you are planning on racing your nitro RC car though, then you will probably not want to try and make it quieter as this can hinder the speed you get when you take your rc car to the race track. Although a nitro RC car has some safety concerns, if you use it properly, then you know that they are amazing RC cars.