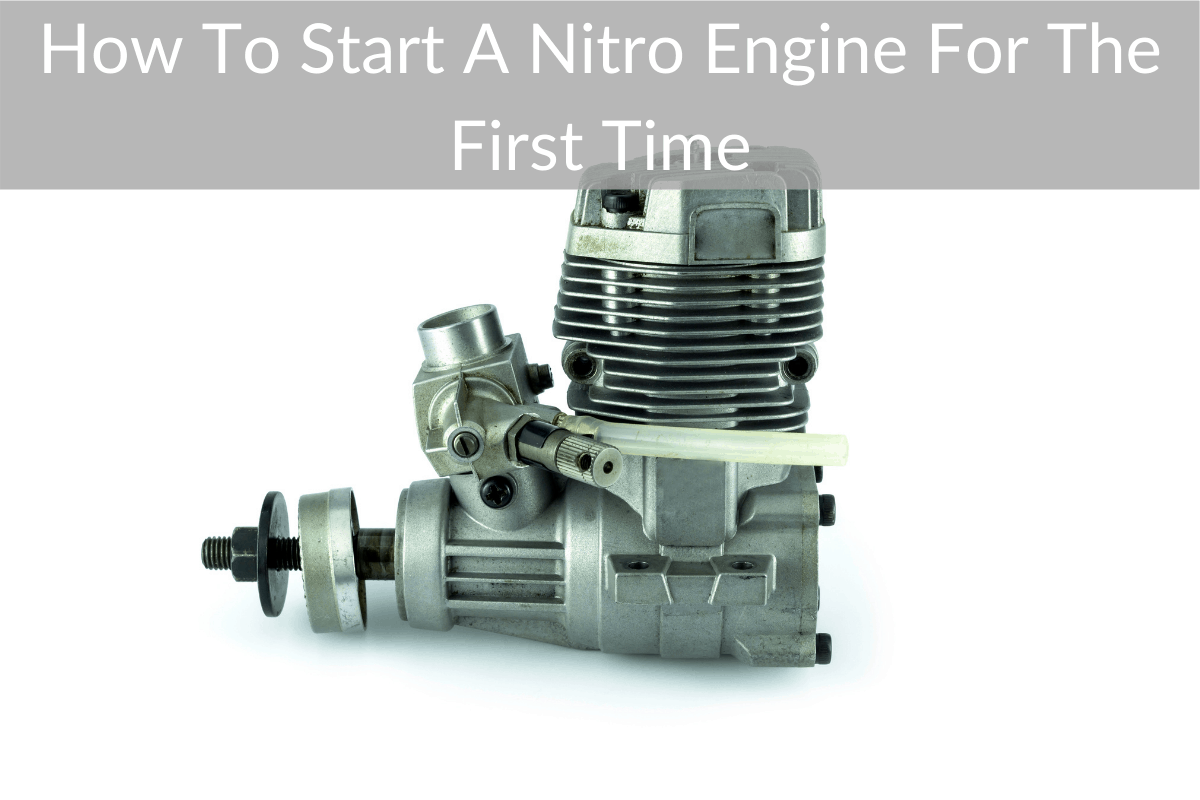 Have you ever wondered about starting a nitro engine for the first time and if there is anything specific that you need to do when starting it? Maybe you are looking at an RC vehicle, and it has a nitro engine and you aren’t sure if that matters. Well, in this article we will go over everything you need to know about nitro engines and how to start them.

So how do you start a nitro engine for the first time?

If you want to look at the top nitro engine rc cars that we love, you can see them by clicking here.

You can also check out this video to watch exactly how to start a nitro engine for the first time.

The major difference between a battery and a Nitro RC car, is the fact that you will need to carry Nitro fuel with you. This is something that many people do not want to do as it smells, and can be dangerous. Even though you have to have fuel with you, it normally comes in a small container similar to that of a brake fluid container.  Also, because the RC cars do  not take very much fuel, that container will last you quite a while depending on how much you race your car. If you are looking for RC nitro fuel, you can find some here.

Another big difference is the noise. Nitro RC cars are extremely loud compared to battery operated ones. When you drive your battery RC car, there is no noise, and it can begin to seem like you are just playing with a little toy, and not an amazing machine. You do not get this feeling when you race with a nitro RC car as they actually have engine noise. Although some people think that they are loud and annoying, most people actually prefer the noise of the entine race instead of no noise at all. There are even some battery operated RC cars that have speakers on them, and try to imitate the sound of a nitro RC car because people prefer noise so much more than they do it being quiet.

Can you use diesel to run an nitro engine?

Many people who happen to run out of nitro fuel want to see if they can use diesel to run their engine. Although they are different fuels, many people hope that it will work so they can keep using their RC car. Unfortunately, your nitro RC car will not run on diesel fuel. This is because the two different fuels have different properties and do not have the same items in them. This means that the nitro engine will not work with diesel just like your regular car that runs on gas will not run on diesel.

Related Post  Can You Use Regular Spray Paint On RC Car Bodies?

How long will a nitro engine last?

Many people are curious about this, as engines can break and be expensive to fix. When you own a battery operated RC car, you do not have to worry about the engine braking, or needing replaced. Instead, all you need to do is to simply purchase a new battery for your RC car. When you have a nitro RC car though, you do have the possibility of the engine breaking down, and no longer working.

The good news is that most nitro RC car engines are built to last, and on average, they last 25-30 years! This is great news as the last thing people want to hear a year after they bought their nitro RC car is that the engine needs replacing because it is bad. Obviously, there can be some engines that do not last this long, due to defects, or damage when being raced. On average though, they will last this long, and you will not have to worry about replacing the engine of your nitro RC car for a very long time.

How long is nitro fuel good for?

Have you just purchased your first gallon of nitro fuel, and you aren’t sure how long it will last? Maybe you found an old gallon of nitro fuel and you want to know if it is good. Well, you should know that nitro fuel if the container is sealed will last for over 20 years! If the container is not sealed, you will want to check and make sure that the fuel does not smell like water. If the fuel smells like water, it is no longer good, and will not be good to put in your RC car. You always want to make sure that you put good fuel in your car that way you do not risk damaging the engine of the RC car.

Related Post  Can A Nitro RC Car Run On Gas?

Even though there are many differences between the nitro engine and the regular battery powered RC cars, many people still prefer the nitro cars because of their sound. Many people love the roar of the engine as it is an actual engine that runs the car and not the battery. Although battery operated RC cars are extremely fun to use, the nitro RC cars are special and once they are running, for the first time are easy to use.