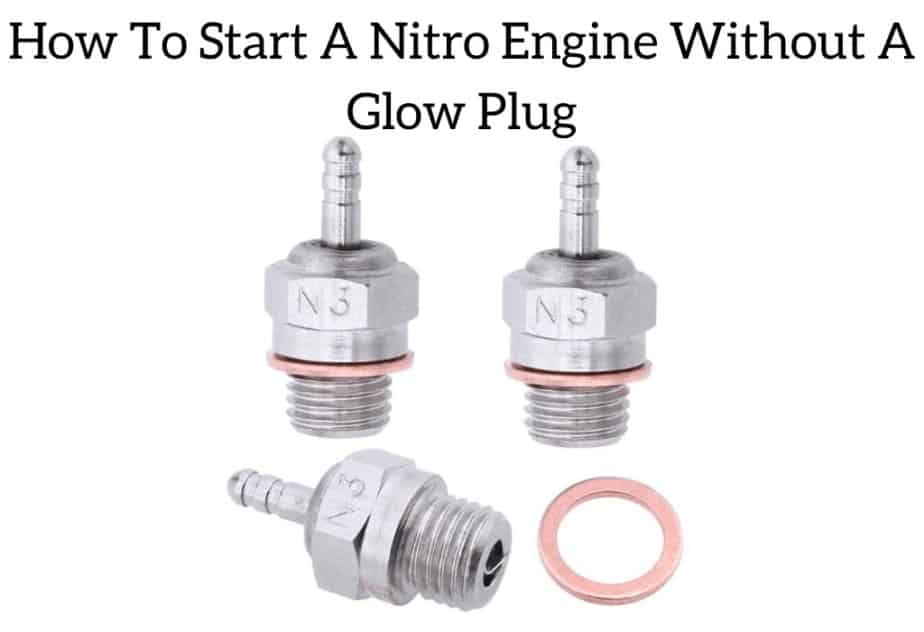 We have all probably been at that point: in such a hurry to get our RC out and having fun that we dashed off and left our glow plug at home. Or, maybe yours just stopped working. Stranger things have and will happen. Do not worry. In this article, we will tell you everything you need to know to get your nitro engine purring like a kitten in no time.

Ready to know just how to get your nitro engine up and going, even if you do not have a glow plug? Keep reading for all the details to get your RC up and running in no time. If you are in need of a glow plug igniter you can find them by clicking here.

What is a Nitro Engine?

A nitro, or nitromethane, engine is powered using a mixed fuel that powers the RC vehicle. These are often preferred when racing or looking for a more realistic experience with an RC. A nitro engine is a tiny combustion engine. Unlike a battery-powered RC, this engine needs a fuel source and an energy source to ignite the fuel.

Nitro engines are often compared to that of a diesel-powered motor often found in full-size vehicles. Older models of diesel vehicles and some even now, required them to be plugged in during colder weather to keep the glow plugs warm and ready to fire the engine up when the engine was turned over.

Why Nitro Engines Use Glow Plugs

Much like a diesel engine in a full-size vehicle requires an additional punch of energy to ignite the fuel, a nitro engine needs to reach a higher temperature to burn the fuel mixture. Using a glow plug allows the transfer of a combination of heated air and fuel for a faster start.

A glow plug usually contains a battery-powered energy source and wire coil. The coil usually contains platinum. Platinum interacts with the methanol in nitro fuel, causing a chemical reaction that heats the coil rapidly allow the transfer of energy so quickly that it ignites the methanol and starts the engine.

4 Options for Starting a Nitro Engine Without a Glow Plug

Now that you know why glow plugs are often used, it is time to get into what is possible when you do not have one available. Keep in mind that most RC enthusiasts will suggest getting a glow plug as soon as possible. In the meantime, here are some options, so you are not left without a running RC in the meantime.

1. Build Your Own DIY Glow Igniter

Before we get into the how to make your own glow plug igniter, you will need a few supplies:

Your RC should fire right up.

You will likely find that a single AA battery will last a few ignitions, so you will want to keep extras on hand in case you need to replace the battery.

While likely one of the least favorite options, you can choose to set your RC up with a pull start. These work just like a pull-start lawnmower. Sometimes referred to as a recoil starter, a pull start requires a special attachment to the RC. When the starter cord is pulled, and the flywheel engages, the RC will start.

The biggest downfall to a pull start is that it sits high on the RC engine, throwing off the center of gravity and, in some cases adding unwanted weight to your RC. Some users also share that they can be finicky and require multiple pulls, especially when the engine is cold.

Another option is to get yourself a starter box or “bump start.” These are common in the RC racing world where time to get an engine started can make all the difference. Unlike the pull start that is top-mounted, the starter box mechanism is not attached to the RC. You simply lower your RC onto the starter box, contacting the flywheel. This is where the alternative name of the bump start comes from.

Related Post  Is A LiPo Battery Safe/Dangerous (Can It Hurt Or Kill You?)

The only drawback to a starter box is having to cart one around. You will also need to connect it to a reliable power source, not always available in many off-road excursions.

The last option is to have your RC retrofitted with an electric start. These come in shaft and onboard designs. The shaft design works much like our DIY version, and mimics the drill, firing up the engine. The onboard starter stays connected to the RC. It features a small motor that is also battery powered. The onboard starter ignites the engine and glow plug simultaneously.

Bonus Tips for Starting Your Engine

Sometimes watching something get done is the best way to learn how to do it. Check ou this video below of someone starting their car without a glow plug.

There are a variety of other ways to start your nitro car without a glow plug but a glow plug is the most convenient for most RC car owners. Some people will have special needs that will make other methods better for their specific cases but for most people a normal glow plug is best.

When it comes to RC vehicles, there are varied levels of enthusiasts from beginners to hardcore RC racers and everything in between. The best advice we could ever give for all of your RC questions is to get out and find a local group to get to know and join in on the fun and kinship that can be found when you fall in love with these amazing cars.

We hope that we have at least provided you with a little bit of information to help you out in a jam or lead you in a whole new direction for your RC adventures going forward.

Whether you are new to the world of RCs or have been around for some time, we all had to start somewhere. This sport is growing faster than anyone could have possibly predicted, and the future looks very bright indeed. Happy RC racing!