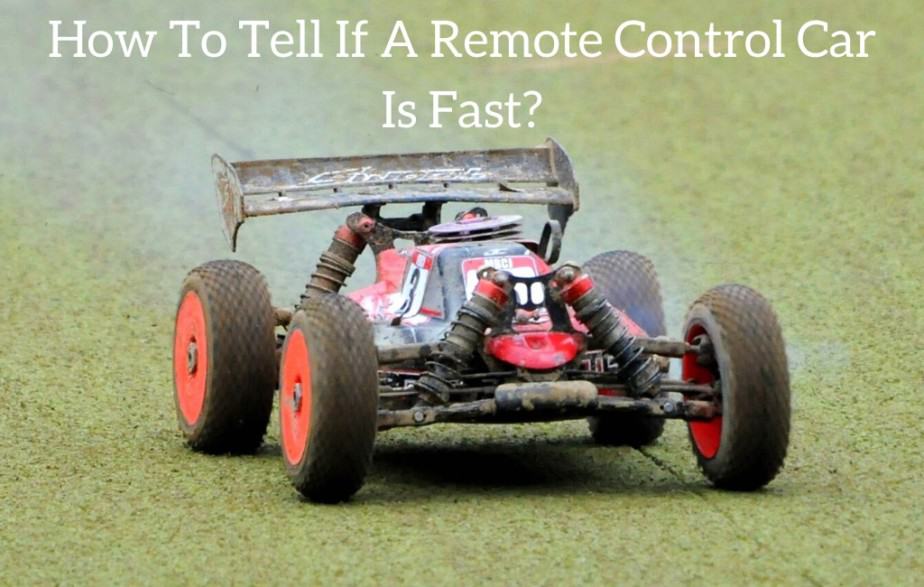 People looking to buy their first RC car will often ask how fast a specific RC car is, but unfortunately, many manufacturers will avoid answering that question because RC cars top speed depends on a variety of things. As RC cars continue to increase in popularity, there will be more and more people who want to buy fast RC cars so that is why we are writing this article.

So, how can you tell if a remote control car is fast? If the manufacturer doesn’t state the speed of the vehicle on the packaging then you either have to find out by testing or by guessing. Testing involves simply getting a speedometer and attaching it to the car or getting a speed gun and using it while the car is moving.

Guessing how fast a car is is a bit more difficult and obviously less exact. Most of the time you can guess how fast an RC car is by its size and how much that the RC car costs. The more expensive the model is the better quality and faster it will normally be.

It is also important to note that brushless motors will go faster than brushed motors so if you want speed then look for a car with a brushless motor.

The more expensive hobby RC cars are likely to clock a speed of 50-70 mph and modified RC cars can go well over 100mph! The fastest RC car ever hit a top speed of over 200mph!

To achieve the fastest speeds possible, you can’t just go and buy a car and think it is as fast as it will get. Modifying your car manually is the best way for it to reach much higher speeds.

What is the real and scale speed of an RC car?

Finding the speed of RC cars will give us two metrics to consider. One of the aspects is real speed, and the other is the scale speed. When you are talking about how fast a car is going then you want to make sure that you understand these two different types of speeds so you aren’t expecting one speed and get another one.

Related Post  Why Is My Traxxas ESC Blinking Red And Green?

Scale speed is a measure of how fast the RC vehicle goes in relation to the full-size model. To understand this, let’s look at it in the purest form: 1:10 scale RC would go about 1/10 the speed of the full-scale vehicle it’s modeled after.

There’s a big difference between 1.7 and 14 mph even though both vehicles have a scale speed of 110mph.

Some sneaky retailers will list scale speed which is a crafty tactic that can mislead newer buyers regarding the speed of the car. A 1/10 scale car listed with a scale speed of 100 mph would only actually achieve 1/10th which is 10mph.

Knowing the difference between these two types of speed will help you make sure that you know exactly what you are getting when you see a car that mentions scale speed or actual speed.

How does size affect the speed of RC cars?

There is a considerable correlation between the RC car’s speed and its size. Although, the relationship between the size and scale of an RC car and its range and actual speed doesn’t always hold true. Some smaller RC cars, especially those for toddlers, are slower, while some modified RC cars have actual speeds much faster than you might expect for their scale size.

What If I Want Even More Speed?

Despite this being just a few guidelines, there are many factors that need to play out to achieve the fastest possible speeds. It would help if you considered every RC car’s difference and the factors that affect the speed of your car. For example, new RC models come with pinion gear sizes which will influence their speed.

Out of the box, configurations will help you work out a rough speed before you buy the car, and with some minimal upgrades, you can achieve much faster speeds with those cars.

When it comes to selecting an RC car speed, it’s not just about the price; you need to take into account how well you can use all of the car’s speed. Just because a car is fast does not necessarily make it better. Sometimes having a slower top speed but better acceleration or handling would be better for your situation.

If you are brand new to RC cars it is better to start off with a little slower of a car and work your way up then it would be to buy the fastest possible model and realize that it is too much for you to handle.

Test the speed of your RC car

How do you test the speed of an RC car? Is there an easy way to determine how fast your car is going?

Thankfully the answer is yes! You can test how fast your RC car is going by putting a simple speedometer on it. A great option for this is the SkyRC GPS Speedometer. This speedometer is specifically designed to work with your RC vehicle to give you exactly how fast it can go.

If you don’t want to use this one then there are a couple of additional things you can do.

Either of these will allow you to see how fast it is going with a radar gun.

The next way you can test the speed is by using the GPS receiver of the RC car. All you need is to install the GPS receiver in your vehicle, and you can measure the speed. The GPS might not work on small RC cars, as it will be hard to fit the device in. This works best in medium-sized or a larger RC car which has plenty of space to install the unit.

Related Post  Are Nitro RC Cars Faster Than Electric? (Are They Fast?)

You can also use a data logger to determine the speed of an RC car. The device works similarly to a GPS receiver. The data logger helps you in not only tracking the speed but also presents it quickly in the graph form, which helps determine which the best RC car among many is.

A data logger is a bit tricky to install compared to the GPS receiver.

The above three devices make it easy to verify the speed for the RC car and measure its exact speed when testing for competition.

Of course you can also measure how fast a car is the old fashioned way… measure a section of road or track and get the car to top speed prior to that section. You can then time the car through that section to see how fast it went through and then do the math.

So if for example you mark off a stretch that is 1/10 of a mile long and it takes the car 10 seconds to get through that stretch then you know that it would take the car 100 seconds to go a mile which means it is traveling at 36MPH. (since there are 3,600 seconds in an hour).

Of course this method isn’t as easy as using a radar gun but it also doesn’t require you to buy any special equipment.

For many people, having an RC car that will go very fast is part of the enjoyment of racing. Afterall, beating the competition because you have built a faster car is quite fun!

There is something inside of all of us that wants to go fast and having a fast RC car helps to satisfy that need without risking getting a ticket for driving your real car too fast! Each RC car is different but normally those from better brands will go faster out of the box as well as allow many different modifications so they can go even faster!

If you want to see how fast an RC car can go with the proper modifications then check out this video below.