If you have any type of RC vehicle from a simple car to the most elaborate drone every single model will have one thing in common, a battery. Every RC vehicle will have at least one battery with many models carrying multiple batteries to increase the time between charges.

Without having a fully charged battery you risk cutting your time using the RC vehicle short so knowing whether your RC batteries are fully charged or not is crucial to operating an RC car, truck, plane, or drone.

No matter which charger you are using for your RC battery the charger will have some sort of indicator light that will come on when charging and then turn off or change patterns when the battery is fully charged.

Some chargers will have a flashing light while charging and will go solid when fully charged while others will do the opposite. How the charger indicates a fully charged battery will vary depending on the model of charger that you have as well as the type of battery you are charging.

Since your RC battery powers the receiver and servos and you can only have fun if your battery is charged, getting your battery fully charged will allow you to use your vehicle for as long as possible before needing recharged.

When a LiPo battery reaches 4.2 volts per cell then that is considered to be  fully charged and at full capacity as long as it is balanced. In another way, a two cell LiPo is fully charged at 8.4 volts and is empty at 6.0 volts

Many consumer electronic devices use a LiPo battery and they have been gaining popularity in the radio control industry for quite some time now. For anyone looking for extended run time and higher power, LiPo batteries are the way to go.

We will dive a little bit deeper into LiPo batteries as well as some more information about charging and discharging batteries in the rest of this article. To see the most popular RC vehicles currently available just click here. 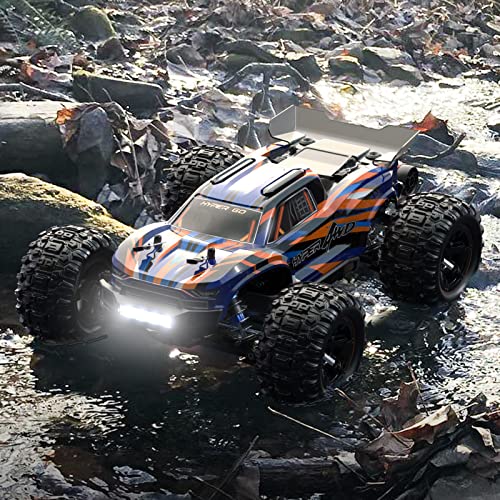 A good RC car doesn’t have to cost a fortune. This 1/16 scale model is 4WD and can reach a top speed of almost 30 MPH!

With speeds like that and 4WD you can take this RC car almost anywhere!

LiPo chargers charge using a system referred to as constant current/ constant voltage. The charger will keep the flow consistent  until the battery reaches its peak voltage which is 4.2 volts per cell in a battery pack. Then it will maintain that voltage as it decreases the current.

When it comes to NiMH and NiCD batteries they charge best using a pulse charging method. If you charge your LiPo battery in this way, it can have a damaging effect, so it’s crucial to have a LiPo compatible charger.

Another  reason why you will need a LiPo compatible charger is balancing.

Balancing is the act of equalizing the voltage of each cell in a battery pack. You should balance LiPo batteries to make sure each cell discharges the same amount. This helps battery performance and is crucial for safety reasons.

Compared to NiMH batteries, LiPo batteries require to be charged rather slowly as you would routinely charge a 3000mah NiMH battery at four or five amps, a LiPo of the same capacity charges at no more than three amps.

As the C rating of a battery decides what the safe continuous discharge of the battery is, there is a C rating for charging as well. The most constant charge rate for most LiPo batteries is 1C.

Due to the potential for fire when using LiPo batteries, regardless of the likelihood, you should take certain precautions. It’s imperative to have a fire extinguisher nearby. The fire extinguisher may not put out the fire, but it will contain the fire and stop it from spreading.

Carbon dioxide is preferred because it helps to remove oxygen from the burn site. Besides, it will cool down the battery and surrounding items.

Charging your LiPo battery in a fire-resistance container is also a good safety precaution. There are LiPo bags (such as this one) on the market, and that is what most people choose to do.

Whenever you are charging your LiPo battery, always be nearby. If you leave it unattended and something happens, you will not be able to take any action should the battery catch fire.

There are some battery charger manufacturers who make a charger that works for both LiPo and NiMH batteries. One made by Traxxass can be found here but there are a variety of ones made by different manufacturers that will allow you to charge both types on the same exact charger.

Lithium polymer batteries contain lithium, an alkali metal which reacts with water and combusts. When heated, lithium also burns when reacting with oxygen.

The process of using a battery, in the extreme ways that we do in the RC world, causes excess atoms of oxygen and excess atoms of lithium on either end of the battery. This can cause lithium oxide to build up on the anode or cathode.

Some modern chargers can read the internal resistance of the battery in milliohms.

If you own one of these chargers, you can get a sense of how your LiPos are performing and how their internal resistance increases as they age.

Keep monitoring the internal resistance reading each time you charge your battery and chart them as they will go higher over time. You will see how the process of using the LiPo batteries over and over begins to wear them out.

Heat causes the excess oxygen to build up, and eventually, the LiPo pack begins to swell. At this time, you should stop using the battery entirely as it’s trying to tell you that its life has reached the end. Further use can lead to danger.

After the pack has swollen, continued use can lead to more heat to be produced. It’s at this point, a process called thermal runaway occurs. Thermal runaway is a self- sustaining response that is accelerated by higher temperatures, in turn releasing energy that further increases temperature.

When this reaction starts, it creates heat. This heat leads to a product that increases resistance, which causes more heat, and the process continues until the battery bursts open from the pressure. At this point the combination of heat, oxygen, and the humility in the air all react with the lithium, resulting in a scorching and dangerous fire.

If you puncture a LiPo that is swollen and still has a charge, it can even catch fire only because the unstable bonds that exist in the charged battery are searching for a more stable state of existence.

As you can see LiPo batteries can be dangerous if you do not care for them properly and if you are not careful. As long as you dispose of LiPo batteries when they begin to swell and are careful to not puncture them they are great and likely are the best choice for your RC car.

No matter which battery or charger that you use there will be a way for you to tell if the battery is fully charged or not. Check the owner’s manual of the charger and see what it says for the light patterns. Most often it will start as a solid light and will flash or turn off when fully charged or it will be flashing while charging and go solid or off when it is finished.

If you no longer have the owner’s manual you can simply put the battery on the charger and see what lights up. Then watch it for a couple of hours and see what the light changes to when it is done charging.