Contents show
1 How can you tell if an RC glow plug is not functioning?
2 What are the steps and precautions you can take to not damage your RC glow plug?
3 What is a Nitro Vehicle?
4 What exactly is a glow plug?
5 How does a glow plug work?
6 What should you look for when buying a glow plug for your nitro engine?
7 Conclusion
7.1 Related Posts:

Nitro RC vehicles are the next big thing in the world of RC racing. They are talked of and read about a lot these days and can be a great way to have some fun while getting a similar experience to a real car. Since nitro RC cars are similar to normal vehicles they also use fuel and a glow plug (similar to a spark plug) like normal cars would.

If you have a nitro RC car or are purchasing a used one and wondered how to tell if that glow plug has gone bad then you are in the right place!

The easiest way to know if the glow plug has gone bad is if the RC car will not start. You can test the glow plug on a driver to see if it glows when separated from the vehicle but it is often easier to simply swap out the glow plug and replace it with a new one.

If the RC car starts and runs just fine once the glow plug is changed then you know that it was bad. If the vehicle is still not working then that obviously isn’t the issue. Since there is only one glow plug on a nitro engine (rather than multiple on a normal one) then changing it out is quite simple and easy for anyone to do.

Glow plugs go bad on a pretty regular basis so having some extras on hand by buying in bulk (such as this 6 pack from Amazon) is a good thing to do if you use your nitro RC vehicle much at all.

To learn more about checking if your glow plug is bad as well as some other important information about glow plugs you will want to keep reading. You can also watch this video below about checking glow plugs if you prefer. 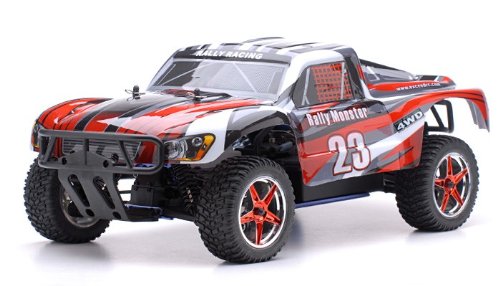 Want to get an RC car that sounds like a real vehicle? Then you have to check out this nitro RC car.

Nitro RC cars take real fuel and sound like the real deal… and they are about the same price as battery powered RCs as well.

How can you tell if an RC glow plug is not functioning?

What are the steps and precautions you can take to not damage your RC glow plug?

What is a Nitro Vehicle?

Now that we know a little more about glow plugs and how to check if they are bad, let’s look a little bit more at the vehicle that uses them, the nitro RC car.

A nitro vehicle is very much like the other RC vehicles out there. The difference is in the type of engine and fuel used. Nitro vehicles run using a nitro engine that requires fuel made with some elements such as nitromethane, methanol etc.

This is in stark contrast to the RC vehicles that use batteries. Battery powered RC cars require less maintenance and upkeep in general but do not have the sound and effect like a nitro powered car will have.

There are also other essential components that are required to make a nitro vehicle work. If you were to just put fuel in your nitro RC car it would never start as it needs something to ignite the fuel and cause the vehicle to run. That missing component is a glow plug.

Glow plugs are a crucial part of nitro vehicles and their engines. However, what exactly they are is confusing to many people. Most people do not have much knowledge or experience when it comes to glow plugs so we wanted to give a little bit of information about those as well.

Read on and you will find out what it is, what its purpose is and more.

What exactly is a glow plug?

A glow plug is basically a tool or a device found in a nitro RC engine. It basically consists of a heating element that is used to heat up the fuel and air coming into the engine. This is because combustion will not take place easily if the engine is cold.

In short, a glow plug simply provides the ignition to the fuel and air in the nitro engine which causes the RC car to start and run properly.

How does a glow plug work?

We all know that engines require 3 very important things to function properly- fuel (obviously), oxygen, and ignition point. It is for this ignition point that a glow plug is required. Inside the plug there is a small coil of wire. The glow plug heats this component, thereby providing the ignition point required by the engine. Once it is heated the engine will start working and that’s it. No more power will be required to keep it going.

What should you look for when buying a glow plug for your nitro engine?

A set of glow plugs with good reviews can be found on Amazon here.

So there you go! Now you know all about RC glow plugs and how to tell if they are not any good. You also know what all to do to make sure no damage is caused to your new RC glow plug.

The next time you have some trouble with your engine, you will know whether it is because your glow plug is not working properly or if it is something else that it is at fault. Make sure you keep your glow plug free of any damage though.

Since glow plugs go bad quite often in nitro engines it is almost always cheaper to purchase them in bulk and keep a few extras with your nitro RC car everytime that you use it so you are never caught with a car that won’t start.