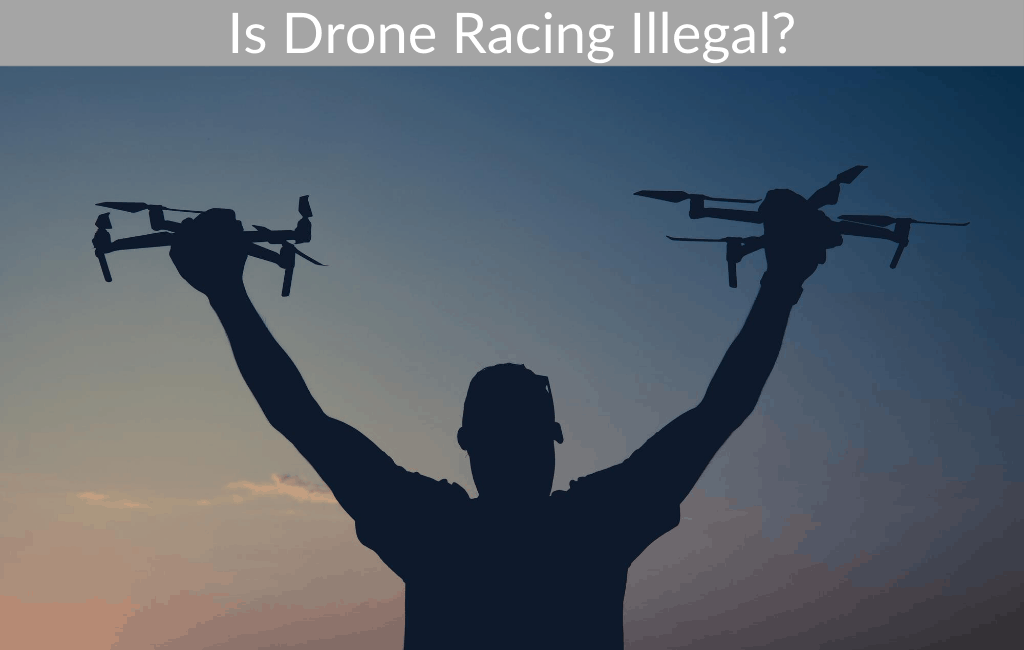 Drone racing can be a quite exciting sport but there have been concerns for many years regarding the legality of it. For example in 2014 the FAA made a statement that drones always had to be in the direct line of sight of the person flying the drone which would mean that FPV racing was not allowed since it uses goggles and you don’t actually view your drone.

So, does that still apply today or has something changed and made drone racing actually legal?

Drone racing is actually legal in the USA because of the changes that the FAA has made in their wording in more recent years. However, if you are racing for prize money it is no longer considered recreation and you will have to have a commercial drone license.

The FAA states on their website that the pilot of the drone or a person next to them in direct communication with them must have a line of sight on the drone at all times. What that means is drone racing is allowed as long as you have a “spotter” next to you. That change in the language to allow a person next to you have a line of sight means that one person can be FPV racing while the second person is watching the drone thereby making drone racing legal.

Related Post  Can You Fly RC Helicopters In Parks?

One way to get around that is to only do drone racing indoors as you are only under the FAA guidelines if you are outside. However, indoor racing requires a large building and ideally some obstacles as well which finding, owning, or renting a location will certainly be much more expensive than the few hundred dollars a year for a commercial drone license.

To see what it looks like for the person who is actually racing a drone check out the video below.

Now that we have covered whether drone racing is illegal or not we will dive into some other important drone racing questions that you should know the answer to as well.

Can a racing drone hover?

Often when people think of drones they think of the traditional recreational drones that they have seen or even flown themselves. Although these drones are similar in style and function to a racing drone that doesn’t mean they all work exactly the same.

Racing drones are actually not built with automatic hovering as a standard feature so they can hover but the pilot will have to control the drone manually and cause it to hover on a racing drone.

Racing drones are typically modified to a great extent or even built from scratch so they will normally not have all the fancy features that other recreational drones have simply because they aren’t needed. Also the lighter and more agile a racing drone is the better so not having to add the extra weight for unneeded features will help them go faster too.

For most people using a traditional drone with a pair of FPV goggles (such as these) will be just fine to learn on and it will also come with the hover option but once you upgrade to an all out racing drone the hovering will have to be done manually.

How far can a racing drone fly?

Racing drones and normal drones will typically have about the same range but how long that is actually varies quite a bit depending on the model, your setup, and whether you have drone range extenders (like these).

Most racing drones will be able to fly somewhere between ½ and ¾ of a mile away from the controller but that can vary depending on the drone itself, interference (trees, buildings, etc.) and whether you have range extenders.

One thing you have to keep in mind is that the FAA requires that you or someone next to you keeps a line of sight on the drone at all times so how far away the racing drone can get should also be limited by whether you can actually see it or not.

Many people have reported using drone range extenders to increase the distance that their racing drone can go by a significant amount with some people reporting well over a mile using these devices. Other people have used aluminum foil (yes I know it sounds weird) with great success at getting a longer range from their drone.

Check out this video below of a range test that was performed with and without drone range extenders.

How long does a racing drone battery last?

If you have used a drone at all you know that having a long battery life is super important as the longer your battery lasts the more fun you can have with your drone.

However, that isn’t how racing drones work.

Racing drone batteries could be designed to last longer but that would make the battery heavier which in turn would slow down the drone significantly. Drones that are used for racing will want to have as powerful of a battery as possible for the duration of the race but any extra battery capacity will just weigh the drone down and hurt the performance.

So a racing drone’s battery life is quite short but that is done on purpose.

How fast is drone racing?

If you’ve ever watched a drone racing event on TV you can obviously tell the drones are moving quite fast but are they actually moving super fast or is it just the cameras that make it look like that?

How fast are they actually going?

Most racing drones will go above 100mph with some of the faster ones hitting above 140mph! The fastest racing drone built to date actually flys over 160mph!

That drone was custom built by the drone racing league and was dubbed the DRL RacerX. More information about this record setting drone can be found at Guinness World Records.

I hope this article has been helpful in answering your questions about racing drones and whether they are legal or not. Now that you know they are indeed legal (although with some additional requirements) you can make a decision on whether FPV drone racing is for you or not.

Ultimately to become a drone racer requires a lot of time and effort to learn and it also requires plenty of skill as well. It won’t just be a fun day at the park and one small mistake could easily cause you to crash and destroy a lot of work and money so be sure and keep that in mind when decided whether to race a drone or not.