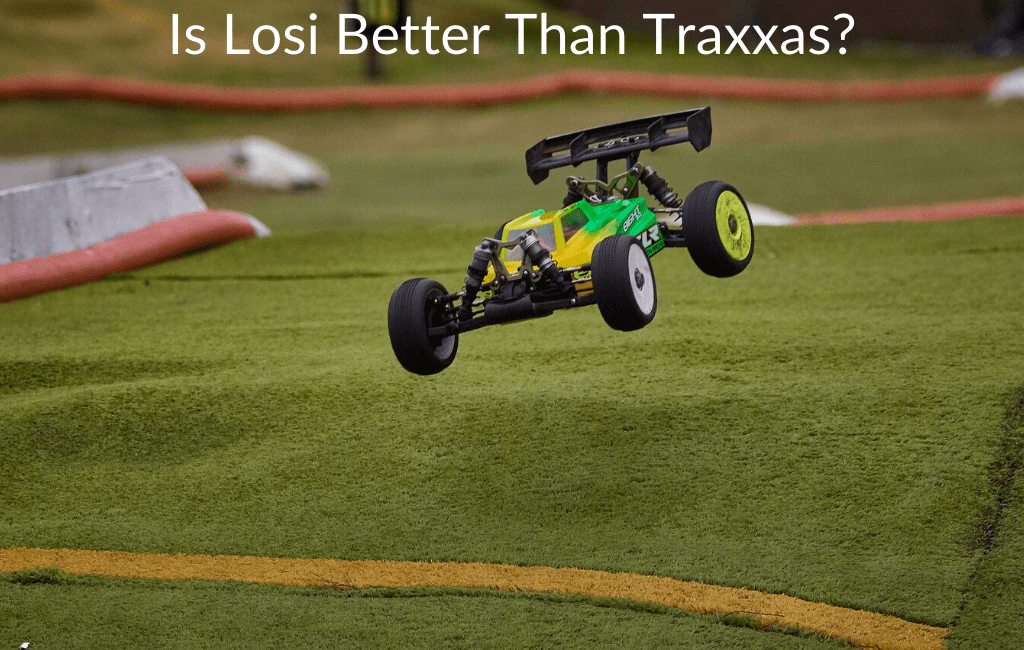 If you are in the market for a new RC car you have likely come across Losi and Traxxas cars over and over again. Both have incredibly popular models and no matter who you ask in the RC community you will surely get a strong answer for or against one or the other.

For ready to race (RTR) RC cars Traxxas is the clear winner by a long shot and Losi doesn’t even come close. However if you compare an upgraded Losi with an upgraded Traxxas both will be good quality.

Which one is truly better depends on your budget and what you will be using the RC car for. Many people who race RCs say that the Losi is far better for racing while the Traxxas is better for everyday type use.

However that is only true with some models.

Quite simply there are some Losi models and some Traxxas models with horrible reviews that you should avoid. It is virtually impossible to compare an entire manufacturer to another one and say that one is absolutely better.

In many people’s opinions Traxxas is a much better car for beginners or people who don’t want to spend a fortune upgrading their RC cars while Losi has better performance when upgraded fully.

Unfortunately just like the Ford Vs. Chevy argument there will likely never be a clear winner when comparing Traxxas or Losi so you are much better off comparing reviews and specs of the similar vehicles that you are looking at rather than comparing the two manufacturers.

Whether you choose Losi or Traxxas you will likely be happy with your choice but if you don’t want to have to upgrade a lot of stuff or are just planning on using your RC for weekend fun then Traxxas is your best bet.

Related Post  What Is The Best RC Truck For Bashing? (What To Look For In A Basher)

To see a specific comparison between a Losi and Traxxas truck you can check out the video below.

Is Losi a good RC brand?

Now that we’ve done a little bit of a comparison between the Traxxas and Losi let’s look a little bit deeper into the Losi brand.

Many people who are buying a new RC car will come across Losi and the first question that they will likely ask is whether it’s a good brand.

Losi is actually an excellent brand and they produce many high quality vehicles. They are well known for their upgradability and how powerful their RC vehicles are.

Just because Losi makes great RC cars doesn’t mean that you should go buy all of them. Just like any manufacturer Losi will have some “duds” so be sure and read all of the reviews of whatever Losi model you are looking at purchasing.

It is always better to spend the time reading reviews at places like Amazon as well as the many RC forums where users will give their real life experiences with the different Losi models.

Is Traxxas the best brand?

At the beginning of this article we talked a little bit about Traxxas vs Losi but there are of course many other RC car manufacturers in the world.

Is Traxxas better than all of them?

To say any single RC car manufacturer is the absolute best just wouldn’t be fair. Some of Traxxas’ models are no doubt the best on the market while others get beat out by the competition.

We can say that Traxxas makes the fastest RTR RC car (the XO-1) and that they make some pretty amazing cars but to say that they are “the best” just isn’t possible.

There will almost always be a smaller company that builds one product that is miles ahead of the larger competitors either in quality or speed so No RC car company will ever be the best but when buying a new RC car you will rarely ever go wrong with choosing a Traxxas.

As mentioned above Losi is an incredibly popular brand and often goes toe to toe with some of the other biggest RC brands in the world. With over 40 years of experience under their belts Losi has certainly learned a thing or two over the decades.

In 2000, Losi was sold to Horizon Hobby after being an independent company for over 2 decades. From then until now Losi cars are made and distributed by Horizon Hobby.

This is actually surprising information to many people as most people think that Losi is still its own company but while it kept the Losi name and most of the models it changed owners in 2000.

Despite its sale over 2 decades ago, Losi still remains one of the most well known names in the RC world and will likely continue to produce great RC cars well into the future.

Where is Losi made?

If you are seriously considering purchasing a Losi car then you would likely want to know where it was made to help with that decision.

Although Losi is located in California all of their RC cars are actually manufactured in China not in the USA. Many people think since the headquarters is in the USA that the cars are made here too but that is incorrect.

Just because Losi RC cars are made in China does not mean the quality is any less than other RC cars however. Virtually every RC car is either made overseas or the parts come from there (including Traxxas which is only assembled in the USA).

It is important to know where your RC car is manufactured however and Losi cars are made in China not the USA.

Does Horizon Hobby own Losi?

Horizon Hobby is a giant international hobby manufacturer that has a variety of brands that they own and manufacture but is Losi one of those brands?

On top of all of these brands Horizon Hobby also owns and operates multiple different branded websites and brands in other hobbies as well.

Many people felt like Horizon would eventually narrow their brands and start cutting out the less profitable ones in favor of either rebranding to “Horizon” or making everything under one main brand like Losi but as of now that hasn’t happened.

When you are looking to purchase an RC car or virtually anything, it’s easy to get caught in the trap of wondering which brand is better. What you should really be asking instead is if this product is better than the competitors.

There is no single manufacturer that is going to be the best no matter which of their items you choose. Every manufacturer will have some products that simply aren’t as good quality or had unexpected bugs or problems that weren’t discovered for a long time.

If you have your eye on a specific size and type of RC car made by Traxxas or Losi then look up the comparison between those two models and don’t worry about which brand is “better”.