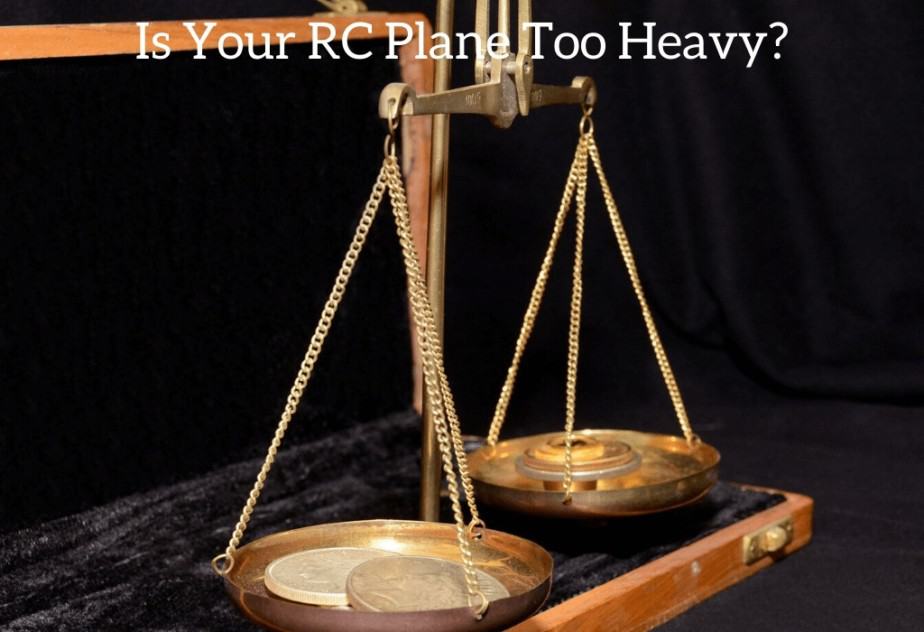 If you own a radio-controlled aircraft and it’s not performing the way it should, then you may be wondering if your RC plane is too heavy. I did the research, and here’s what I found.

Is your RC Plane too heavy?

RC Planes should be as light as possible. A pre-built purchase has a specified weight to check. If it’s from a DIY kit, then the aircraft may end up with more glue, epoxy, or paint than it should; however, that’s not usually a weight problem. Ultimately, it’s probably a balance issue.

Several systems work together, which affect the weight on both the nose and tail. First, check the AUW (all-up weight of everything on the plane) to make sure the plane is as light as possible. Next, it’s time to determine the plane’s center of gravity (CG) and set the balance.

Center of Gravity on an RC plane

The balance between the RC plane’s nose and the tail is known as the center of gravity. And the manufacturer lists the CG for the plane in the owner’s manual. When everything balances around the CG, the plane is safer and easier to fly because it’s stable and the handler has more control.

What’s more, RC Planes work like a fulcrum. So a little weight in the tail equals a considerable shift in the center of gravity. That means you need to keep an eye on what’s happening on the tail-end of the aircraft.

An RC plane gets nose heavy if the center of gravity is toward the front. When a model is nose-heavy, that affects the way it handles. From what I’ve seen, RC plane enthusiasts tend to want their planes a little heavy in the nose for more control.

On the other hand, if your RC plane is heavy in the tail, that means the center of gravity is too far back. When it’s tail-heavy, then you’ll notice that it’ll pitch up when you launch it. Not only that, but a heavy tail also makes the plane squirrely in the air and hard to land.

What is the pitch on an RC plane?

To put it simply, the pitch is when the nose of the plane is facing either up or down. What affects the pitch are the small moveable pieces on the models’ tail, known as elevators. The trim is that action between the remote control and the elevators.

You adjust the elevators as needed to keep the plane level and stable in the air.

If you’re confused, don’t worry, I also found a couple of videos to illustrate. After all, it helps to see the planes in action.

Carlos Reyes from RC Advisory explains how the elevators work on an RC plane and how to adjust them to make the aircraft more stable.

When the plane is nose-heavy, it puts more force on the tail. And with the tail pressing down, the wings have to work harder to keep the plane in the air. So the plane is sluggish and less efficient.

What this means for you is less flying time.

The real danger comes in the landing, though. If your RC plane is too heavy in the nose, you may not have enough elevator to lift it up into the best position for a safe landing.

Carlos says the best way to adjust the issue of a heavy nose is to slide the battery pack back ever so slightly. You’ll find the sweet spot by experimenting with the best place for the battery.

Josh and Dave from Flite Test demonstrate what happens when your RC plane is too heavy in the tail. They say anything can fly as long as it has enough thrust, lift, and balance.

Of all the things you need to consider when you get your plane in the air, balance is one of the essential elements of a safe and fun flight. Josh demonstrates the effects of a tail-heavy issue by adding weight to the back of the plane.

You’ll notice that it doesn’t take much weight to cause issues in-flight. In fact, two fishing weights do the trick.

The thing is, it’s best to learn how to adjust your throttle when the plane pitches up hard, instead of counteracting it by forcing it down because you run the risk of a reverse snap.

Go to a field with a soft place to land instead of a parking lot or a concrete landing pad when you’re checking to find out if your RC plane is too heavy. That way, you run less of a risk of ruining your aircraft on the landing.

Now you’re probably wondering how to check the center of gravity.

It’s okay if it’s a little nose heavy. However, if that’s too noticeable, or if it’s tail-heavy, you’ll want to make adjustments.

The Lateral balance on your RC plane

An RC plane’s balance from side to side includes the weight of the wings. If one side of the aircraft is heavier than the other, the plane will always want to roll to the heavy side.

Here’s how you check the lateral balance:

Once you understand how balance and weight work together to determine your RC plane’s flying pattern, you’ll start to understand right away if your RC plane is too heavy and how to check to find out where the issues lie.

Truthfully, it’s best to check the pitch and balance before you take your RC plane out for its maiden flight.

What are some materials to use if you want to DIY (build from scratch) an RC plane? Balsa wood, cardboard, and Styrofoam all work great if you’re going to build your own RC Plane.

Are there standard dimensions to use when you build from scratch? Yes, and you can find lots of diagrams and how-tos online if you’re into building your own RC plane. Print out the instructions, buy your supplies, and get going.

What are some different types of RC planes? You can pick up trainer planes and RC planes for aerobatics or faster planes for sports. There are even vintage planes, pontoons, and helicopters, as well as much less expensive RC planes for kids.

Are drones RC planes? No. They function with remote like RC Planes and hover like a helicopter; however, they’re a specialized piece of equipment that holds a camera and act more like an unmanned aircraft. The most significant difference between an RC plane and a drone is the way we use them.